Strategies for Fighting Self-Doubt in Weightlifting 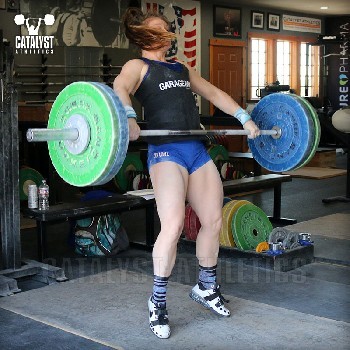 When you’re training towards a big number you want to hit, there’s a road you have to travel. That road is supposed to be smooth, but sometimes it gets a little bumpy.

For example, let’s say you’re a weightlifter who has a personal record snatch of 95 kg. You’ve snatched this weight more than once, and it’s getting pretty easy. Obviously, you’re going to set your sights on 100 kg.

So you find a competition to lift in. Let’s say there’s a meet three months away, and that’s where you want to hit 100. Ideally, you’d like to snatch it in training before the meet.

The road you have to travel towards snatching 100 is a three-month training cycle where you start out with lower percentage weights and then gradually build up towards the big day. Maybe the initial weeks of the cycle are going to have you snatching around 80ish% for reps (around 75-80 kg) to sharpen your technique, build consistency, and establish a good base.

As the weeks roll forward, you’re going to continue to increase the weights you snatch in training. 85…88…91…93…etc. This is your road to 100. However, this is also where the conversation gets juicy.

Because that big 100 kg target is looming in your brain, you expect all the lighter weights that lead up to it to be solid. Your mentality is that if you’re truly going to be ready to snatch 100 kg, you shouldn’t have any trouble with anything in the high 80s or low-mid 90s. Those weights should go up pretty easy if you’ve really got 100 kg in you.

And in a perfect world, that’s how it will all play out. You’ll blast right through all those buildup weights as you travel the road of your training cycle, and then you’ll walk up to 100 kg with your guns fully loaded, ready to kick the living hell out of it.

There’s a pretty good chance it’s not going to go perfectly every step of the way. Trust me, one of those workouts along the road is going to give you trouble. Let’s say it’s the week when you’re programmed to snatch 94 kg. This weight is slightly below your personal record 95 kg, which you’ve made multiple times, and it’s 6 kg below the goal weight you want to lift.

You go to the gym nice and prepared, confident in what you’re doing because you’ve been crushing it every week. All those weights in the 80s were ridiculously easy, and you can feel that 100 kg in your bones. 94 kg should be a weight you just tear right through…but it doesn’t go that way. Maybe you miss it twice before you hit it. Maybe you hit it on the first try, but it feels heavy and you barely make it. Or maybe you just flat out can’t get it.

God, your brain starts to screw with you at this point, doesn’t it? It’s amazing how you can go from totally confident to nervous as hell in one workout. All those questions start flooding into your mind. Am I really good enough to snatch 100? How the hell am I supposed to hit 100 at this meet when I can barely hit 94? Am I training wrong? What the %#$! is going on?

This is the kind of psychological warfare that happens in weightlifting. Only instead of battling a physical opponent, you have to battle yourself. Because the only way you’re going to be able to pull through the doubts and eventually snatch that 100 kg is by winning the fight that’s taking place inside your own head, inside your soul. You wonder if you’re good enough to do what you set out to do, if you’re strong enough to conquer that weight that you want more than anything in the whole damn world.

Those bad workouts that happen along the road make you question yourself. They’re like little termites that sneak inside and try to destroy everything. You have to literally fight back against them, by finding ways to resurrect that belief in yourself that went into jeopardy with one lousy workout.

Your coach might be able to help with the right kind of words and conversations, or by building your confidence back up by programming some lighter lifts you’re going to make consistently. But after almost three decades on that platform, I can positively tell you that the only person who can snatch that 100 kg is the one who’s looking back at you in the mirror. At the end of the day, your coach can only do so much. If you want success in this sport, you have to go out and get it. Along the way, you’ll have to figure out the mental strategies that are right for you, the ones that are going to build your mind up and make you tougher than any bad workout. You will have those bad workouts, my friends. We all will. And no matter how tough you are inside, you’ll never be completely immune to self-doubt and fear.

Are there any tactics or strategies I could suggest that will help you win these battles? Sure. Here are a few:

1) Keeping a journal of your training is valuable for several reasons, and this is one of them. When you have bad workouts and rough moments, you can go back in your journal and look at old records you kept from a year ago, two years ago, whatever. You’ll find reminder situations where you got in a jam…and still had success anyway. These situations are frequent in weightlifting. So when they happen to you, go back and look at times when they’ve happened in the past. Rebuild your confidence through knowing that you survived and conquered once before, and you’ll be able to do it again.

2) Have regular interaction with lifters who are more experienced and successful than you. Ask them if they’ve dealt with the same obstacles as you. Personally, it always made me feel more confident when I knew the best athletes in the sport had struggled in their careers, just like me. I think it gives you a mental boost to understand this. When you struggle, you can easily convince yourself that you’re a piece of crap. So you should talk to other lifters who have great accomplishments and learn about the obstacles they’ve dealt with. They’re obviously not pieces of crap. They’re champions. That means there’s hope for you.

3) Get your mind off weightlifting when you leave the gym. Go home, binge watch your favorite shows, have fun with family and friends, and do things that put a smile on your face and distract you from training. Don’t get carried away and go on a three-day crack binge or anything. Just find little ways to have fun that keep you from just sitting on the couch driving yourself crazy while you obsess about your missed lifts in the gym.

This sport will just flat out screw with your head, people. It’ll screw with your head worse than the craziest girlfriend or idiot boyfriend you’ve ever had. But do yourself a favor and watch a weightlifting meet sometime. You know those lifters you see on the platform making their 3rd attempts and jumping off the platform to hug their coaches, screaming with joy? You know why they’re so happy? Because they fought the mental battle we’ve talked about in this article…and they won. They did it. They beat the doubts and fears, and they hit the weights they wanted to hit.