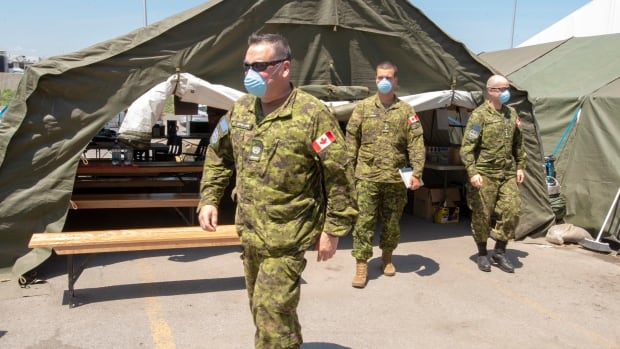 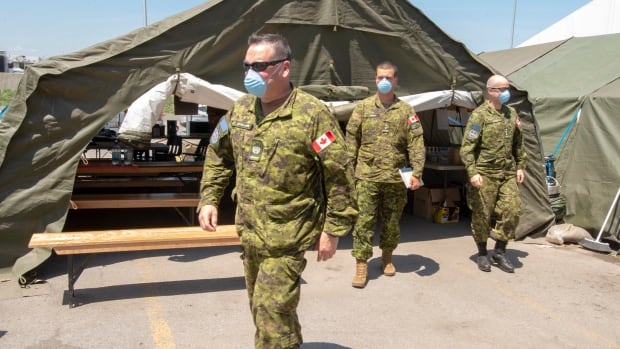 A report prepared by the Canadian military about Quebec’s long-term care homes says the division between “hot” and “cold” zones, proper use of protective equipment and staffing shortages remain major challenges in the facilities.

The report was shared with the Quebec government Tuesday night and made public this morning, on the heels of a separate, more damning report a day earlier about conditions in Ontario.

The Quebec report provides an account of the conditions in 25 homes where members of the military have been assisting during the pandemic.

In many cases, the military describes how equipment and staffing were inadequate when they arrived but have since improved.

At the Centre d’hébergement Saint-Laurent in Montreal, for example, the report notes some staff weren’t properly using protective equipment and were moving between “hot” zones, for those who have tested positive, and “cold” zones, which are supposed to be COVID-free.

Problems in Quebec’s long-term care homes, known by their French initials as CHSLDs, have already been well-documented.

More than 60 per cent of deaths related to COVID-19 in Quebec have occurred in CHSLDs. Nearly a third of the facilities in the province are currently battling outbreaks.

Workers on the front lines have described chaos inside the homes, including a lack of protective equipment for staff and for residents who had not yet caught the disease.

Soldiers first arrived in Quebec in mid-April, as the crisis unfolded. Since then, according to the report, the situation has improved, though some problems persist.

For example, at Vigi Mont-Royal, another Montreal residence, the report notes a shipment of narcotic medications seemed to have disappeared, and care units were short of supplies of some items.

“A lack of medical equipment is often noted during shift changes, and the soldiers had to intervene several times to offer solutions to allow the nursing staff to do their work safely,” the report says.

According to the report, there still aren’t enough patient attendants, who provide much of the basic care in the homes.

At CHSLD de la Rive, in Laval, the report noted a persistent shortage of staff, saying “most of the people who work at the centre are volunteers with little or no CHSLD experience.”

In reacting to the report, Premier François Legault announced a program to hire and train 10,000 new patient attendants by the fall.

He said the government would offer a three-month training program over the summer, during which the prospective employees will be paid $21 per hour. If they complete the program, their starting salary will be $26 per hour.

“I ask all Quebecers that can to consider it very seriously,” Legault said Wednesday.

The premier said he would like the contingent of soldiers to help in CHSLDs until Sept. 15. But Defence Minister Harjit Sajjan told CBC’s Power & Politics that won’t be possible.

“We will not be able to go that duration … when you have our people working seven days a week it’s just not sustainable,” Sajjan said.

More than 1,675 troops have been deployed to long-term care homes in Quebec and Ontario to help with residents’ day-to-day needs, to clean the facilities and distribute meals.

Legault thanked the soldiers on Wednesday, saying, “We’re lucky to have you.”

Military ‘not a long-term solution’

The Canadian military’s report on Ontario detailed allegations of elder abuse in five Ontario long-term care homes, describing residents being bullied, improperly fed and in some cases left for hours or even days in soiled bedding.

Prime Minister Justin Trudeau said Wednesday the federal government will be part of reforms to improve conditions in Quebec and Ontario as they try to “regain control of their systems.”

“Obviously the report highlights a number of preoccupying issues,” he said, adding there will be a need for “much longer conversations” about how to ensure seniors get better care.

“We’re very lucky to have the military, but it’s not a long-term solution.”

Watch Trudeau’s reaction to the report on long-term care homes: