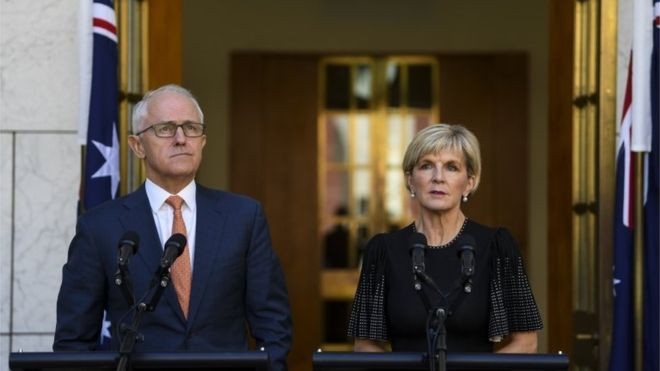 Australia has become the latest country to expel Russian diplomats as part of a global response to the poisoning of a Russian spy in the UK.

PM Malcolm Turnbull said “the brazen attack in Salisbury was an attack on all of us”.

More than 100 Russian diplomats from more than 20 countries were expelled in a co-ordinated response by the US and EU nations on Monday.

Russia vowed to retaliate to the “provocative gesture”.

It denies any role in the attack on Sergei Skripal and his daughter, Yulia, in Salisbury, southern England. The pair, who were poisoned with what investigators say was a military-grade nerve agent, remain in a critical but stable condition in hospital.

Australia is throwing out two diplomats suspected of being “undeclared intelligence officers”.

Backing the UK in what is thought to be the largest collective expulsion of Russian intelligence officers in history, Mr Turnbull cited interference in elections and threats to “the sovereignty of our partners”.

“That is why we are taking this action today with another 23 nations round the world. We are defying this lawlessness, this recklessness of Russia,” he said.

EU leaders agreed last week it was highly likely Russia was behind the nerve-agent poisoning.

But the Russian foreign ministry said the moves demonstrated a continuation of a “confrontational path”.

“It goes without saying that this unfriendly act by this group of countries will not go without notice and we will react to it,” its statement said.

In an interview with the BBC, he said “Russian behaviour needs to change” and “the world has had enough”.

But he rejected suggestions that a new Cold War was dawning and stressed again that the UK had no quarrel with the Russian people.