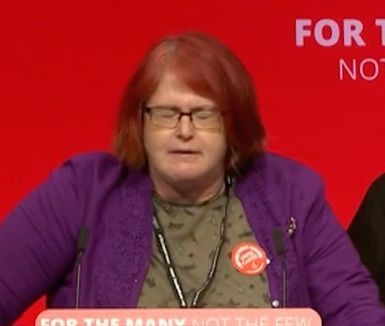 A Labour delegate fainted while speaking on the main stages of Labour Party’s annual conference in Brighton, today.

Hazel Malcolm-Walker, representing Bournemouth West at the conference, was taking part in a debate on the floor of the conference this morning. She spoke out over the closure of Poole Accident and Emergency, calling for more discussion on the subject.

She said: “We’re not asking for much, we’re asking for five minutes of conference’s time so that you can show our support for newly target seats in Bournemouth East and Bournemouth West.”

The audience applauded and she prepared to continue with her speech, but she looked visibly distressed then said, “I’m not feeling…Oh God”, before collapsing to the floor of the stage.

Paramedics came on stage to attend to Ms Malcolm-Walke and they took her out of the hall in a wheelchair. As she was wheeled out of the hall, she waved to the audience and high-fived a colleague.

See the video below.