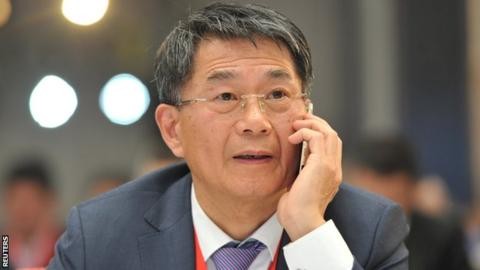 Chinese businessman Jisheng Gao and his family have completed a deal to buy 80% of Southampton.

In January, Gao’s company Lander Sports Development said a deal was agreed, but the takeover is now a personal investment.

“Today is the start of a new and exciting chapter for our club,” said Katharina Liebherr, who inherited Saints from her late father, Markus, in 2010 when they were in League One.

Liebherr said the Gao family share Southampton’s “values and ambitions”, adding: “As a team, we will strive to build upon the strong foundation that is in place towards sustainable long-term success.”

She said both parties have “full trust” in the Premier League club’s chairman Ralph Krueger and his management team and support plans to follow the “Southampton way”.

“I am honoured and humbled to become a partner of Southampton Football Club alongside Katharina Liebherr, who, together with her father, has been such a great steward of the club, its growth and success,” said Gao.

“Together, we have the passion and motivation to build on Southampton’s excellent progress in recent years as we look forward to an exciting next chapter for the club.”

A spokesman for the Premier League said: “As with any change of control at a Premier League club, we have checked the sources and sufficiency of funding in place to acquire the shares, and been provided with a detailed business plan showing the new owners can sustain the club going forward.

“We have also conducted the Owners’ and Directors’ Test, which includes detailed background checks on any individual proposing to acquire more than 30% of shares in a club, or to be a director on the club’s board.”

English clubs Aston Villa, Birmingham, Wolves, Reading and West Brom already have Chinese investors, as do Italian side AC Milan, who were bought for £628m earlier this year.

In 2015, Manchester City also sold a 13% stake of the club worth £265m to a consortium of Chinese investors.

Analysis – ‘Saints’ next chapter will be fascinating’

While Saints owner Katharina Liebherr has described this new investment as a partnership, the reality is that the Gao family – father Jisheng and daughter Nelly – are now 80% majority owners.

Day to day this investment is not set to create upheaval at the club; the current board and management at Southampton will continue to run the club and I do not expect Saints to veer far from the path they have been on.

The Gao investment will of course have been discussed at length by Katharina Liebherr, who will have done all she can to protect the club and to make sure the Gao family have the club’s long-term interests at heart, like she and her father Markus have had.

But she has brought this investment in to strengthen the club financially and to take it further than she feels she is able to on her own. She has done this to keep the club moving forward, albeit I suspect in a measured way, not with a sudden splashing of cash.

Her legacy as sole owner is easy to see – two promotions saw her finish what her father started in 2009, the revival of Southampton FC from near extinction.

But she has done more than that. She has led a club in a dignified way without once feeling the need to justify herself publicly, she has led a business that has thrived on bettering players, and she has turned Saints into a consistent top-half Premier League club.

The Gao family have an incredible platform from which to build. The next chapter for Saints, Chinese ownership, will be fascinating to see.