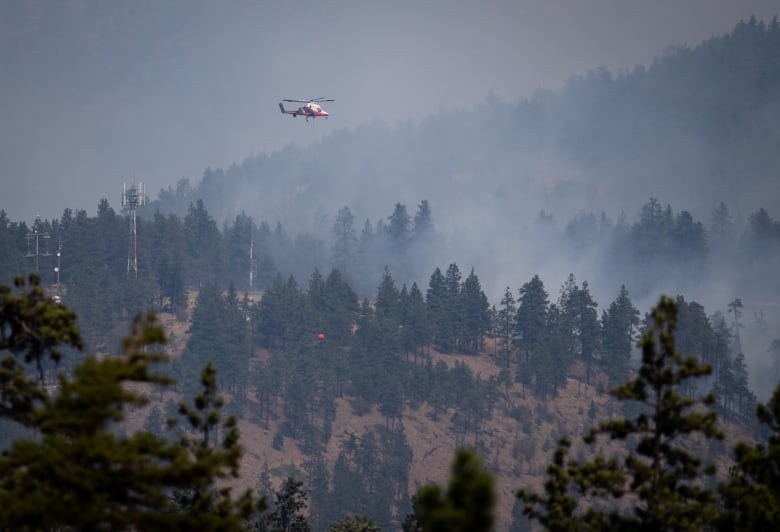 Wildfire smoke is in the forecast for B.C.’s south coast this weekend, in addition to a heat wave, which in the wake of last month’s fatal heat dome prompted warnings Friday from health officials.

Metro Vancouver is expected to see smoke roll in this weekend, joining communities across the province that have been blanketed by wildfire smoke for weeks, at levels far above World Health Organization maximum levels.

As air quality across B.C. continues to pose a health risk, B.C.’s wildfire service says 241 wildfires are currently burning, down from about 300 last week. A new fire is sparking partial closures in Manning Park, about 200 kilometres east of Vancouver.

Heat warnings or special weather statements now cover much of B.C., packing temperatures from the low 30s in the northeast to 40 C in the Fraser Canyon and Boundary regions.

Rob Schweitzer, director of fire centre operations with the wildfire service, warns that the heat, along with limited cooling at night, could contribute to severe burning conditions over the next few days.

Lightning is also in the forecast for regions already ranked at high to extreme risk of wildfires.

FireSmoke Canada says smoky skies could arrive in Metro Vancouver and on the South Coast Saturday morning, but winds from the west will likely push it eastward by Sunday.

The smoky haze contains fine particulate matter, which can be especially difficult for people with respiratory issues, as well as older adults, infants, young children and pregnant women.

Health officials said everyone should “reduce time spent outdoors and reduce strenuous activities” until the smoke clears, but also said the forecasted heat wave puts many people at an even greater risk.

“For most people, heat stress is a bigger health risk than smoky air,” Vancouver Coastal Health said. “During hot and smoky conditions, it is recommended to prioritize cooling indoor spaces when possible.”

Environment Canada issued an air quality advisory at 2 p.m. PT for eastern Metro Vancouver and the Fraser Valley because of high concentrations of ground-level ozone that are expected to persist into the weekend.

Much of the province is already accustomed to dangerously smoky air.

On Friday, conditions worsened in some areas, particularly in and around Kelowna, which had an air quality rating 42 times the maximum levels recommended by the World Health Organization, with reports of street lights turning on during daytime and low visibility.

The wildfire in Manning Park, although just 18 hectares in size, prompted B.C. Parks to briefly close a local lake to boaters on Friday, and to evacuate a backcountry cabin in the area used by hikers.

The fire is visible from the highway, which remains open. And campgrounds in the park are also still open to visitors.

“Right now, we’re being advised that there is no imminent danger,” Vern Schram, general manager of the privately run Manning Park resort, told CBC News on Friday. “That said, we’re weighing through the scenarios and looking at what we might need to do should the situation worsen.”

The fire is labelled a “Rank 4 aggressive fire,” and “rapid attack” firefighters have been deployed to start tackling it, as well as aerial crews.

July 30, 2021 – 3:20pm: BC Parks has asked us to close the Blackwall and Lookout Road until further notice as a precautionary measure. Access to the lake has resumed for boats and boat rentals. The resort and campgrounds remain open.

The Vancouver Park Board announced Friday afternoon it will be temporarily closing all non-essential access to Stanley Park between 10 p.m. and 6 a.m.

The closure is aimed at reducing fire risk to the park, according to a statement on the city’s website.

The Stanley Park Causeway will remain open but access to the seawall will be closed.

The temporary closure will be in effect seven days a week beginning July 30 and will extend indefinitely until the fire risk has been significantly reduced.

One month after the village of Lytton, B.C., was virtually wiped out by wildfires, its residents try to come to grips with what they’ve lost. 2:36

Emergency Management B.C. says 60 evacuation orders covering just over 3,000 properties remain in effect, while residents of nearly 19,000 other properties must be ready to leave on short notice.

Evacuation orders were downgraded to alerts late Thursday for several properties near a 654-square-kilometre wildfire burning northwest of Kamloops.

But the wildfire service says that blaze and most of the nearly three dozen listed as fires of note remain out of control and continue to challenge firefighters on at least one flank.

“It continues to be a challenge, especially with having aerial resources limited due to the visibility,” Forrest Tower, with B.C.’s wildfire service, told CBC News. “That really does put a heavier focus on our ground crews.”

Around 7:30 p.m. Friday, the Thompson-Nicola Regional District issued a new evacuation order for 43 properties near Tunkwa Lake, east of Kamloops, which is threatened by the Tremont Creek Wildfire.

Evacuation orders were also issued in the last day for 125 properties on the Bonaparte Plateau, east of 70 Mile House, due to the Flat Lake wildfire.

The B.C. Wildfire Service says more than 241 wildfires are burning across the province, the largest number of them in the Kamloops region  — an increase of 54 fires from last week. The largest blaze remains the nearly 590-square-kilometre Sparks Lake fire, discovered June 28 north of Kamloops Lake; it remains out of control, according to authorities.

A total of 4,710 square kilometres have burned so far this year in B.C. — a 36 per cent increase over the past decade’s wildfire season average. Experts say climate change is contributing to longer and worse wildfire seasons.