Elk Island National Park staff are equipping bison with smart collars to find out where and why the buffalo roam.

“Our GPS collars record a location every two hours and they transmit that data via satellite once a day so those maps are a snapshot of each point from one day,” DeMoor says.

Which means while park staff may not have up-to-the-minute locations, they do have a pretty good idea of where the bison spend most of their time.

That intel is shared on a map in the visitor centre to “increase your odds of finding the herd,” DeMoor says.

Often the herd is just out of sight, over a hill or tucked into a stand of trees, he says.

“The information we get from those collars lets us understand how the bison are using the park, what kind of habitats they’re using, and the difference in different seasons in terms of where they head.”

The collars also reveal something of the herd’s social scene.

“It’s one large herd that breaks off into little groups and then they come back and then mingle up and they split off into different groups,” DeMoor says. 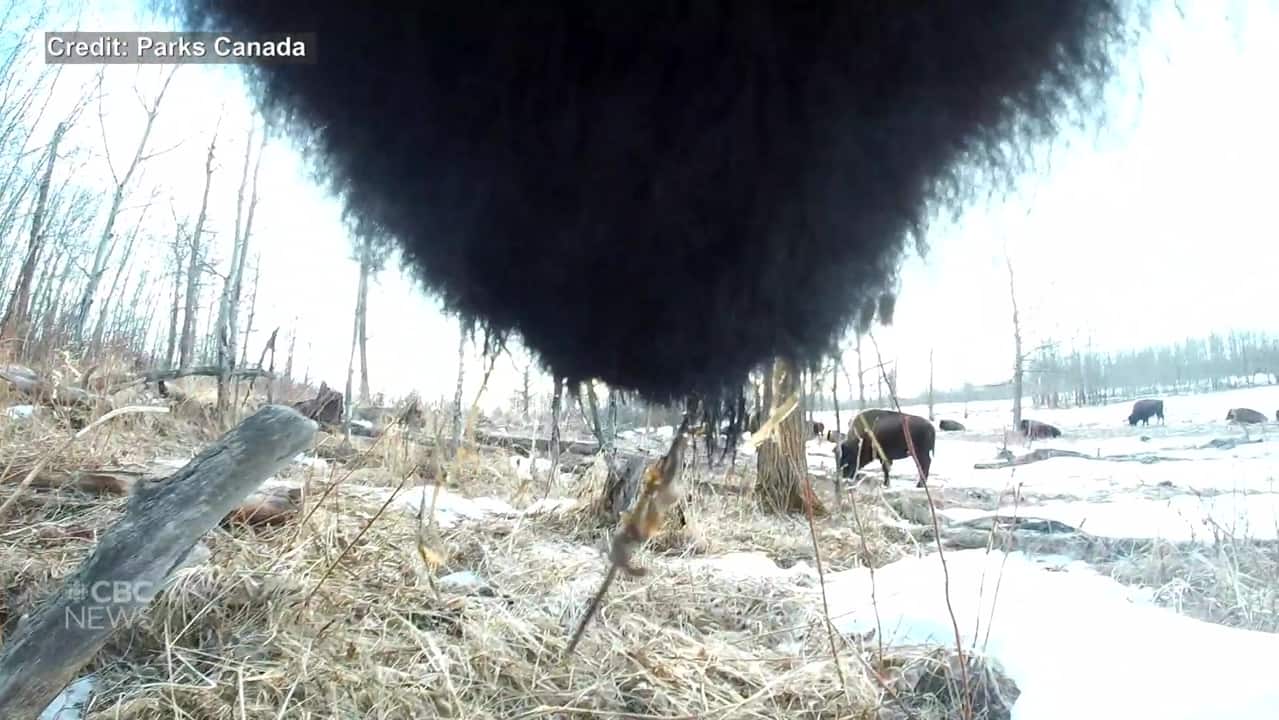 ‘Elk Island is so important globally in terms of bison conservation’

Some of the bison in Elk Island National Park east of Edmonton are sporting high tech trackers, one even has a video collar. 2:01

You can see more from Elk Island National Park on this week’s Our Edmonton on Saturday at 10 a.m., Sunday at noon and 11 a.m. Monday on CBC TV and CBC Gem.

The collars also have an accelerometer, a Fitbit-like device, built in to record how much the bison move.

The park has been collecting data from the collars since 2016, but recently one of the animals was also equipped with a camera.

“It’s actually a radio collar combined with a video collar on the bottom of it,” says Brian Eaton, chair of the Friends of Elk Island Society (FEIS), which purchased the $5,000 camera.

The camera, attached to the five-year-old bison nicknamed Feisty, records 20 seconds of video every hour during the day, Eaton says.

After a year of wearing it around the collar was recently retrieved and the camera sent to the German manufacturer where the video is now being downloaded.

The bison body cam has predictably revealed a lot of walking and grazing but there are also videos of Feisty watching the traffic go by, wallowing in dirt and taking naps in the tall grass.

Matching these snippets with the location data gives researchers a glimpse into herd behaviour.

“Then you can say, she’s moving pretty fast, she’s probably running,” Eaton says. “We don’t know that for sure, now we can look at this video clips and relate it to what her accelerometer data looks like and they can actually use that to calibrate what they’re getting from other animals as well.”

Bison are North America’s largest land mammal. Millions once dotted the continent from Alaska to Mexico, before they hunted to near extinction by early settlers.

The Canadian government purchased one of the remaining herds and, between 1907 and 1912, shipped more than 700 animals by train to Elk Island.

This 194-square-kilometre space is the country’s largest fully enclosed national park with a mix grasslands, aspen and boreal forest.

For decades, animals from these seed herds for both sub-species of North America bison have been relocated to countries around the globe and to First Nations across Canada.

Right now a few dozen wood bison are in a pen waiting to be moved to Alaska.

“To us, they’re deities out there, placed in different sanctuaries throughout the universe,”says Jerry Saddleback, Samson Cree Nation Elder, on a recent visit to the park.

For his people observing the sacred animals is nothing new, he says.

“We had our own traditional people who knew how to track them through buffalo trails, … which direction they would be traveling and where our [encampment] would be ideally located.”

Saddleback says being near the animals at the park is rejuvenating.

“It gives you a certain level of inspiration; it touches your soul.”