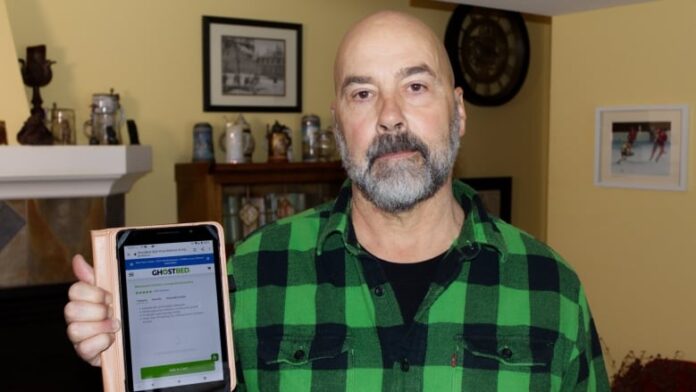 When online ads for a new mattress started popping up on Peter Learn’s Facebook feed last January, it didn’t take much to convince him he needed one — he and his wife had slept on their current mattress for 20 years.

“It looked very appealing,” said the Kelowna, B.C., man. “I kept telling my wife we had nothing to lose.”

The ads were for GhostBed — a company that hit the competitive world of online mattress sales seven years ago — trying to woo customers away from competitors like Casper, Endy, Purple, Leesa, Nectar and Saatva.

Some of the ads featured tennis pro Venus Williams, talking about the importance of a good sleep and how her team has co-designed a line of mattresses “built for champions.”

GhostBed promises that customers can try a mattress for up to 101 days — three months — and return it “hassle-free” if not satisfied.

So Learn and his wife Paula ordered a medium-firm king mattress for $1,329.

It arrived quickly, but it was the beginning of months of sleepless nights.

“We woke up feeling quite sore because there was no support for our backs,” said Learn.

“You try sleeping on your side. Your back. If you slept on your stomach, you’d probably drown in the sponge. It didn’t work in any position.”

When he tried to return the mattress, the company’s “hassle-free” promises evaporated, he says.

He soon learned the Florida-based company has hundreds of complaints filed against it with the Better Business Bureau, and that he was expected to do all the heavy lifting — literally and figuratively — if he was to get any money back.

A spokesperson for GhostBed declined an interview request.

In a statement to Go Public, he said the company takes customer service and satisfaction seriously but that when customers don’t get the resolution they seek, they often “blame the business” and feel the company’s policies “are unfair.”

Mattress sales have boomed as the pandemic has reoriented people’s budgets — from spending on travel to making the home a comfy nest.

A recent industry report projects that global mattress market revenues will almost double to more than $64 million by 2030.

The companies “need to overcome customers’ disinterest in buying a mattress online because they couldn’t try it out in a store,” she said.

“But then companies have to honour that promise.”

Learn says he and his wife tried to adjust to their new mattress, but after nine weeks they contacted customer service, complaining of aches and pains and saying they wanted a refund.

The customer service agent suggested, via email, he flip the mattress over — which was “ridiculous” said Learn, because the bottom has a hard surface and is not designed to be slept on.

Still, they gave it a shot. But after a few more uncomfortable nights, Learn tried again to get a refund.

This time, the agent offered to send a mattress “topper”: another layer to supposedly improve comfort.

“It was even softer than the mattress,” said Learn. “The topper was just straight sponge.”

But the most disheartening part, says Learn, was when he told GhostBed he had reached the end of his rope and wanted the mattress to be picked up.

The website promises unhappy customers that a “pickup crew will … remove your mattress.”

Instead, Learn was told he had to find a “donation solution.”

That is, find a charity willing to take a mattress — during a pandemic, no less — transport it to the charity, obtain a receipt — made out to GhostBed — for the price he paid, and send that receipt to the company, which would then provide a refund.

“The whole thing was just so ludicrous,” said Learn. “We would have to hire a truck to deliver it to a non-existent charity which wouldn’t want the mattress, either.”

Go Public asked GhostBed spokesperson Alan Hirschhorn about Learn’s assertion that the website doesn’t tell customers they’re responsible for finding a charity that will accept a mattress and then hauling it over to them.

Hirschhorn wrote: “This is simply not true,” and that the company’s policies “are clearly on our site.”

Asked on the phone where the find-a-charity policy was spelled out, he couldn’t find any mention after poking around the site for several minutes.

“You can’t say something that is not true,” said McNeish, the marketing professor.

“The website very clearly says ‘the pickup crew’ will take the mattress away, which is not me with the mattress on top of my car, driving around. That’s trickery.”

Hirschhorn later emailed Go Public to say clarifying information about finding a charity would be added to the website, which appeared within a few days.

Learn filed a complaint with the Better Business Bureau (BBB) — one of more than 300 filed against GhostBed in the past three years: more than half of those in the last 12 months.

“The majority of the complaints cover refund and exchange issues,” said Cinthya Lavin, vice-president of communications for the Southeast Florida BBB.

“The company addresses the complaints — there’s a reply — but they don’t resolve them.” 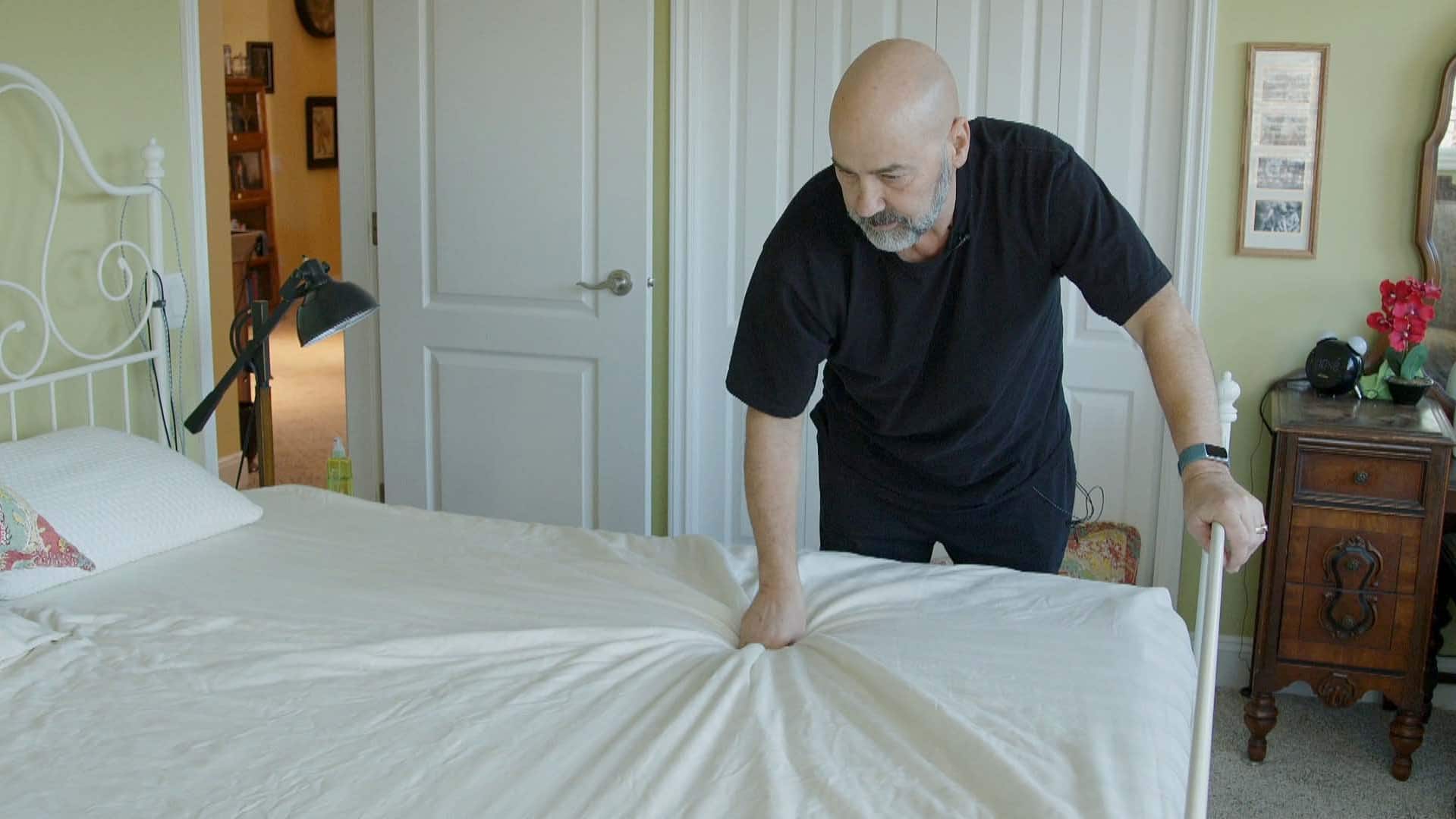 Some customers are frustrated after learning that the “hassle-free” returns offered by online mattress retailer Ghostbed are actually a big hassle. 2:15

Many of the complaints are about mattresses that slide off their bases, like the one Clayton Crory of Slave Lake, Alta., filed.

He bought what’s called a “split king”: two twin mattresses that, pushed together, form a king.

He and his wife paid $4,900 for them and two adjustable bases. But the mattresses were far too soft and kept sliding apart, he says.

“You toss and turn and everything’s just sliding all over,” said Crory.

A customer service agent told Crory to use zip ties to hold the legs of the bases together, then suggested he purchase “rug grippers” — that normally go under carpet runners that slide on the floor — to try to keep the mattresses in place.

When none of that worked, Crory asked for a refund. That’s when he learned he didn’t qualify — a GhostBed agent told him refunds are only given for “comfort issues” and Crory was complaining about having two mattresses.

“If you’re tossing and turning and it causes the mattresses to slide apart, that’s a comfort thing,” said Crory. “What a ripoff.”

He says he left repeated messages with GhostBed, but the company basically “ghosted” him — stopped returning his calls.

Asked about Crory’s case, Hirschhorn, the spokesperson, claimed the customer “was unwilling to work with us” and that “we have solutions for people who purchase a split king and are unhappy.”

Hirschhorn did not elaborate on those solutions.

Crory has put the mattresses in the garage and he and his wife are back on their old one. He says they can’t buy a new mattress until they’ve paid off their GhostBed debt.

Meanwhile, Florida’s BBB isn’t the only place people have been filing complaints against GhostBed. Frustrated customers have also reached out to the Florida Attorney General’s Office.

“The attorney general requested all the complaints and cases we have,” said Lavin.

“It is a serious sign. It’s an indication that the attorney general is getting ready to perhaps bring a government action to the company.”

As for Peter Learn in Kelowna — he’s trying to move on from what he says has been an extremely frustrating experience, although he says the GhostBed he and his wife purchased is serving a purpose.

“We use the mattress in the guest room,” he said. “It discourages guests from staying for too long.”