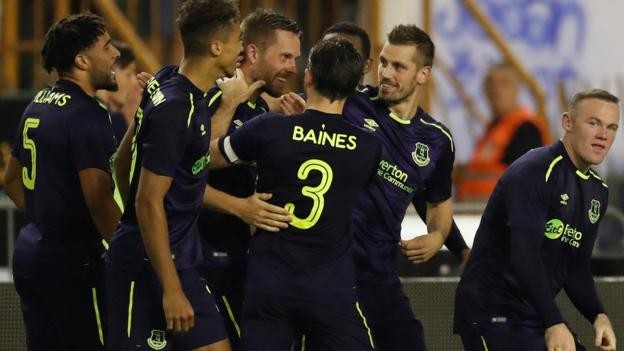 Gylfi Sigurdsson marked his first Everton start with a stunning 50-yard strike as Ronald Koeman’s side reached the Europa League group stage at the expense of Hajduk Split.

But Sigurdsson, making just his second Everton appearance following his £45m transfer from Swansea, put even that superb strike in the shade just 14 seconds into the second half.

Picking up a loose ball on the right of the pitch, just a few yards inside the Hajduk half, the Iceland midfielder fired an effort high towards goal and over the frantic reach of the back-pedalling Dante Stipica.

The hosts might have got one back when Ashley Williams fouled Ante Erceg in the area and the referee pointed to the spot, but Pickford – another big-money summer addition to the Everton ranks – got down low to his right to keep out Ahmed Said’s penalty.

Wayne Rooney, named in the starting XI a day after announcing his international retirement, had a chance to win the match on night for the visitors but goalkeeper Stipica saved.

Everton will learn their group-stage opponents when the draw is made in Monaco on Friday (12:00 GMT).

Man of the match: Sigurdsson steals the show

There cannot be many better ways to start paying off a £45m price tag than that conjured by Sigurdsson just a few moments into the second half.

The £50m valuation Swansea placed on the 27-year-old in July raised eyebrows at the time, but in a few fleeting seconds against Hajduk he demonstrated why he is surely worth every penny, particularly in an inflated market.

His tenacity in closing down his opponent and cutting out an attempted pass was meat and drink midfield play, but what followed was sublime, looking up to see the goalkeeper off his line and then having the creativity, confidence and technique to produce an inch-perfect shot as he fell to the ground.

Up to that point and for the rest of the match Sigurdsson was neat and tidy in midfield – almost peripheral at times – but when it counted he was there with a telling contribution.

It is a sight Everton fans are likely to become accustomed to in the months and years ahead.

‘You need to be really clever to see that possibility’

Everton manager Ronald Koeman: “I saw Gylfi’s goal, but I don’t think everyone on the bench did. It was incredible. I don’t have any other word for it.

“You need to be really clever to see that possibility and, after two or three weeks of the season, it could be the goal of the season.

“The penalty save was key as well because there were still 30 minutes to go at that time. Jordan is showing that we made the right decision to sign him. He is still a young goalkeeper and I have been really impressed by what he’s done from day one here.

On resting Idrissa Gueye: “It was too risky to start [him]. He had a scan on his hamstring and everything was fine, but we didn’t want to take the risk with Morgan Schneiderlin out of the game on Sunday [through suspension].”

Everton will not have long to enjoy their success in Split, with a tough away trip to Premier League champions Chelsea to come on Sunday afternoon (13:30 BST).