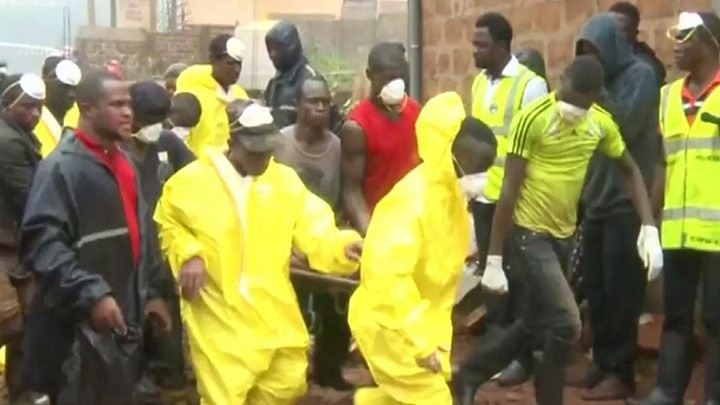 Sierra Leone needs “urgent support” now for thousands of people hit by mudslides and massive flooding in the capital, the country’s president says.

Ernest Bai Koroma said entire communities had been wiped out and that the “devastation was overwhelming us”.

More than 300 people have been killed and a mass burial of victims is planned to free up space in mortuaries.

Efforts to recover more people from the muddy rubble that swept through the Regent area are continuing.

The Red Cross said it was struggling to get equipment in to extricate bodies that were buried deep in the mud.

Africa Live: Updates on this and other African stories

Many victims were still asleep in their beds when disaster struck.

It is feared the number of dead will rise further. Another 3,000 people are estimated to have lost their homes.

Ishmael Charles, a charity worker for the Healey Relief Foundation and Caritas Freetown, told the BBC words could not do justice to the scale of the tragedy.

“You will see a huge number of people crying with those who have lost their family members,” he said.

“It’s very difficult to paint what the reality looks like, because it’s more scary and very sad and disastrous than anyone can be able to describe.”

In the worst hit area, the Regent district, where dozens of houses were submerged when the hillside collapsed at about 06:00 GMT, those who survived spoke of the family members they had lost – or still hoped to find alive.

“My wife is dead. My children are all dead. This morning my children and I talked before I left for work. One of them even chose the socks I should put on,” a man called Malikie told the BBC.

Another woman, called Adama, said she was still searching for her baby.

“We were inside. We heard the mudslide approaching. We were trying to flee. I attempted to grab my baby but the mud was too fast. She was covered, alive.

“I have not seen my husband, Alhaji. My baby was just seven weeks old.”

International aid agency Save the Children said one member of staff, along with his children, had disappeared.

His colleague Ramatu Jalloh was driving past Regent at the same time that the wall of mud and debris hit the area.

“A lady ran on to the road and started gesticulating wildly,” he said. “She called out to another lady who had been riding a bike in front of us who, after a brief conversation, started crying and looked very upset,” she said.

“It was clear from their reactions that something terrible had happened. Soon afterwards, another man ran towards our car. He was crying about the number of lives that had been lost.”

Fatmata Sesay, who lives on the hilltop area of Juba, managed to survive the mudslide after she and her family were woken by the pounding rain.

It was then they realised their home was submerged in water.

“I only managed to escape by climbing to the roof of the house when neighbours came in to rescue me,” she told AFP.

“We have lost everything and we do not have a place to sleep.”

Earlier, President Koroma urged people to stay away from the affected areas.

“This tragedy of great magnitude has once again challenged us to come together, to stand by each other and to help one another,” he said.

“Let me assure you that my government is fully engaged on this situation and in collaboration with our development partners we have already established an emergency response centre at Regent to coordinate our response and to provide relief to the survivors.”