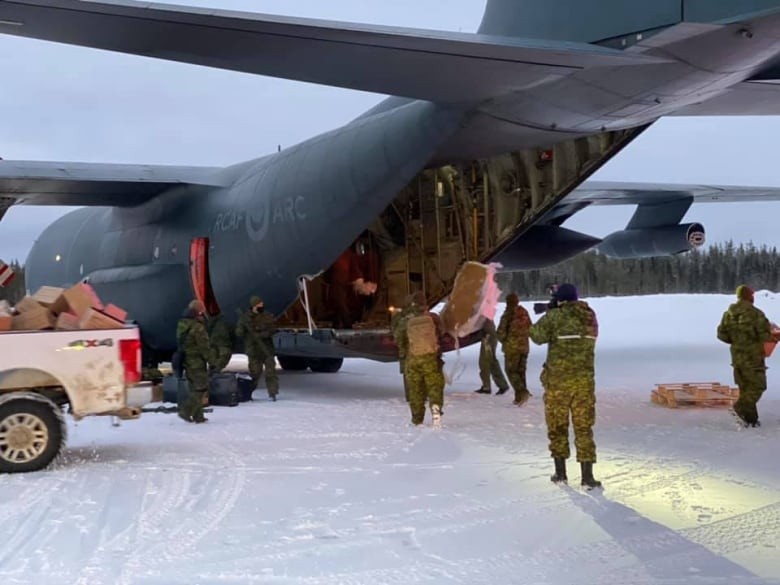 More help from the Canadian Armed Forces has arrived in Shamattawa following a desperate plea from the First Nation’s chief.

The northern Manitoba fly-in community has seen a spike in COVID-19 cases, with about 25 per cent of people living on reserve testing positive for COVID-19, according to Chief Eric Redhead.

Just after noon on Saturday, Redhead posted on Facebook that roughly 25 members of the military had arrived in the community, with more set to arrive later in the day, including medics, nurses and other personnel.

“It was emotional. I have to be honest there. I felt that it was a relief not only for me but for members in the community. It was an emotional feeling for sure. I held back tears because I knew our people needed health and it finally arrived,” he said in an interview with CBC News Saturday evening.

He said the team will set up isolation units at the community’s school and help with tasks like door-to-door grocery delivery, wellness checks and contact tracing. The military will work alongside members of the Bear Clan Patrol, the Canadian Red Cross and Shamattawa’s chief and council, Redhead said.

Redhead, who first called for military support on Nov. 30, said he is expecting an additional 30 military members to arrive Sunday. He said medics, nurses and regular military members are part of the deployment. He said they are bringing personal protective equipment, medical supplies and hopefully snowmobiles.

The chief said as of Friday, there were 323 positive cases identified but he suspects the number is higher because of difficulties getting people tested.

“I’m afraid that the entire community is a contact,” he said.

A spokesperson for the military said by Sunday, the contingent deployed to Shamattawa will include nearly 60 people.

Seventeen of them — including nurses, medical technicians and one general duty member — will make up a multi-purpose medical assistance team that will establish and staff an alternative isolation area in the community, the spokesperson said. Those members are from the 1 Canadian Forces Health Services Group in Edmonton.

Roughly 40 others sent to Shamattawa will help establish that isolation area and will be redeployed once that’s done, the spokesperson said. That team is from the 2nd Battalion, Princess Patricia’s Canadian Light Infantry from Shilo, Man.

Those members of the military will be in addition to six Canadian Rangers and one Canadian Ranger instructor from Winnipeg who were sent to Shamattawa earlier to support the community, the spokesperson said.

Roussin announced 447 new cases of COVID-19 province-wide Friday, more than 100 of which were from Shamattawa.

“They’re certainly dealing with a significant outbreak,” he said.

The chief, who said the test positivity rate on his reserve is hovering between 70 to 80 per cent, blamed overcrowding in his community for the rapid spread of the illness.

An elder who contracted COVID-19 had to be airlifted to Winnipeg, where she is in intensive care, Redhead said. He said all 15 members of the elder’s crowded home tested positive.

“When you have so many people living in a confined space, it’s prime breeding ground for this virus,” he said.

Redhead said a small military assessment team that was previously sent to the community wasn’t enough support. He repeated a call for an additional 60 to 70 members to help in the COVID-19 response in the community, about 745 kilometres northeast of Winnipeg.