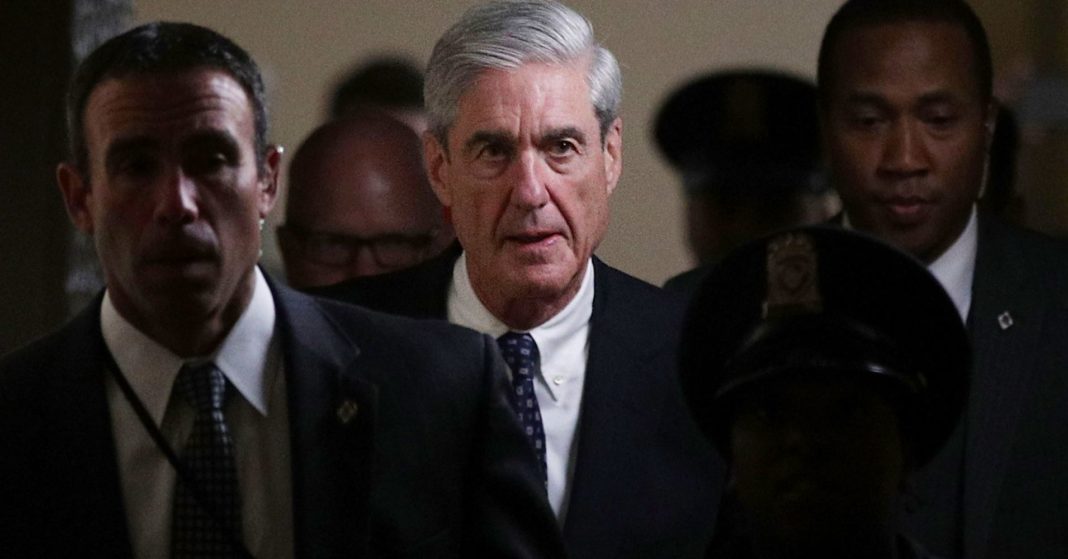 An effort by GOP Sen. Jeff Flake and Democratic Sens. Chris Coons and Cory Booker to force a full vote on a bill designed to protect special counsel Robert Mueller was blocked Wednesday.

Sen. Mike Lee, R-Utah, objected to the attempt to bring the bill forward, citing late Supreme Court Justice Antonin Scalia as he argued that “the Senate cannot convert an office like this one … without creating a de facto fourth branch of government.”

The bipartisan bill has received glimmers of support from Republicans — legislation protecting Mueller even passed the Republican-held Senate Judiciary Committee. But Senate Majority Leader Mitch McConnell, R-Ky., had already told reporters on Tuesday that he would “probably” block it once again.

Speaking on MSNBC’s “Morning Joe” on Wednesday, Delaware’s Coons said President Donald Trump posed a threat to Mueller’s Russia probe. “I don’t know what would give me the idea that President Trump might suddenly do something unpredictable, except that he does it almost every day,” Coons said.

Flake, who is leaving his Arizona Senate seat at the end of his term, has become one of Trump’s loudest critics in his own party. He has also emerged as one of the Senate’s staunchest defenders of Mueller’s ongoing investigation into Russian interference in the 2016 U.S. presidential election and potential coordination between Russia and Trump campaign-related figures.

“This bill is designed to do one thing: protect the integrity of the Special Counsel’s investigation, and spare it of any interference from the executive branch, including from those who may themselves be subjects of the investigation,” Flake said on the Senate floor earlier in November.

Trump has repeatedly said there was no collusion between his campaign and the Kremlin and has tried to discredit the probe, calling it a “witch hunt.”

The special counsel declined CNBC’s request for comment on the legislation. A spokesman for McConnell referred CNBC to the majority leader’s remarks on the bill Tuesday.

While Flake has at times been accused of grandstanding by his detractors, he took a step beyond mere rhetoric in November by refusing to vote to advance Trump’s judicial nominees in the Judiciary Committee — a threat Sen. John Cornyn, R-Texas, said has been taken into account.

Asked by journalists Tuesday if there will be a vote on the bill in order to end Flake’s blockade during the lame-duck session, Cornyn replied, “If that’s what it’s going to take, yeah.”

He said Senate leadership is checking the balance of favor on the bill now “to see where people are to give us an idea of what the outcome would be.”

A bill protecting the special counsel passed the committee in April with unanimous support from the Judiciary panel’s 10 Democrats. GOP Sens. Lindsey Graham of South Carolina, Thom Tillis of North Carolina and Judiciary Chairman Chuck Grassley of Iowa joined Flake in support of advancing the bill.

But when Flake on Nov. 14 asked for consent from the Senate to bring the bill forward, McConnell shot it down. Senate rules dictate that so-called unanimous consent requests be rejected if even one senator objects.

The retiring Arizona senator retaliated by vowing not to vote on Trump’s judicial nominees until his legislation comes to a vote in the full Senate.

Meanwhile, Trump has amped up his attacks on the special counsel. “Wait until it comes out how horribly & viciously they are treating people, ruining lives for them refusing to lie,” Trump wrote in a furious series of tweets Tuesday. “Mueller is a conflicted prosecutor gone rogue.”

On Tuesday, McConnell shrugged off concerns that Trump would axe Mueller. “This is a solution in search of a problem. The president is not going to fire Robert Mueller, nor do I think he should, nor do I think he should not be allowed to finish,” McConnell told reporters. “We have a lot of things to do to try to finish up this year without taking votes on things that are completely irrelevant to outcomes.”

Asked specifically if he would block the bill again, McConnell replied: “I probably would, yeah.”

McConnell said the Senate has other pressing issues to address, including the president’s judicial nominations and avoiding a possible government shutdown by approving a year-end spending package.

If Mueller were to be fired, the bill would require the attorney general to provide a specific reason for the removal. It would also allow the special counsel to challenge his firing in federal court and would save all of Mueller’s work compiled before his firing.

Some conservatives have argued that such a law would violate the separation of powers enshrined in the U.S. Constitution. “I think it’s an unconstitutional bill and forgets the lessons we learned from independent counsel in the past like with Watergate,” Cornyn said Tuesday.

The push to protect Mueller comes amid a flurry of new developments in Mueller’s probe. On Monday, Mueller’s attorneys wrote in a Washington, D.C., federal court filing that Trump’s former campaign chairman, Paul Manafort, lied to the FBI on a “variety” of topics after striking a plea deal in September.

Manafort, who is currently in jail, was convicted in August on eight felony counts lodged by the special counsel in Virginia federal court. The charges related largely to his past work for a pro-Russia political party in Ukraine, which he performed years prior to joining the Trump campaign.

It is not yet clear what Manafort is alleged to have lied about. His lawyers maintain in the court filing that Manafort “believes he has provided truthful information.”

A day later, The New York Times reported that one of Manafort’s lawyers briefed Trump’s own attorneys about the ex-campaign chief’s discussions with federal investigators. Those briefs were provided after Manafort agreed to the plea deal, the Times reported.

Also on Tuesday, The Guardian published a bombshell report that Manafort held multiple clandestine meetings with WikiLeaks founder Julian Assange in the Ecuadorian embassy in London between 2013 and 2016. Manafort, in a statement Tuesday evening, called the report “totally false and deliberately libelous.”

Acting Attorney General Matthew Whitaker, whose appointment was announced less than a day after the Nov. 6 midterm elections, has been denounced as a “loyalist” for Trump and a critic of the special counsel.

Just a few months after the special counsel was appointed, Whitaker, a former U.S. attorney in Iowa, penned an op-ed for CNN arguing that the probe is “dangerously close to crossing” the so-called red line not to look into the Trump family’s finances.

Graham told reporters on Nov. 15 that Whitaker assured him during a closed-door meeting that Mueller was handling the investigation appropriately, as far as he has seen.

Coons, on “Morning Joe” on Tuesday, said lawmakers of both parties “have privately agreed that Whitaker is a less reliable supervisor and may well stumble into interfering with the Mueller investigation.”