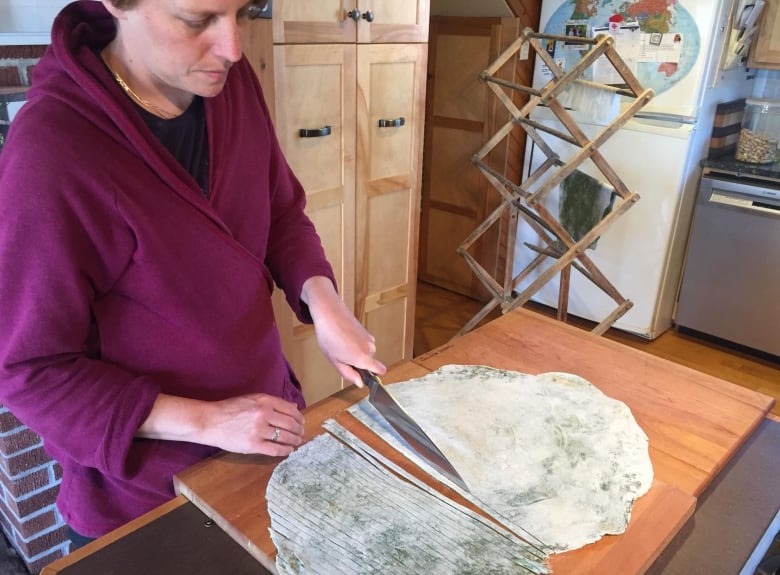 More Prince Edward Islanders have begun foraging for their own food, and experts say a snack can be as close as your own backyard.

Josie Baker co-created the Facebook group P.E.I. Foraging Friends, which in the past year has amassed almost 1,000 members who share photos of their harvests, recipes and more.

“I have been interested in plants I would say for the better part of my life,” Baker said. “As a child we had a mint patch, and I would love to go out to the mint patch and get my parents to make mint tea for me.”

Now she enjoys the fun of identifying plants in the wild and knowing some of their uses, whether she harvests them or not.

“I think that anything we do to be more connected to the land we live on is a good thing,” she said, pointing out that during the COVID-19 pandemic, there has also been a huge gardening boom.

Baker said she feels gratitude to P.E.I.’s Indigenous people for her Island home, and said she feels a responsibility to respect and uphold the peace and friendship treaties the Mi’kmaw people signed with settlers. On the Facebook group, she points out which species were introduced by settlers and encourages members to read Braiding Sweetgrass: Indigenous Wisdom, Scientific Knowledge and the Teachings of Plants to help understand honourable harvest.

Baker likes to call attention to wild plants that are abundant on P.E.I. and said she never picks more than half of what’s available.

“Not only myself, but other things, rely on those,” she said. “I don’t want over-harvesting.”

All of those wild greens that are probably in your backyard that you think of as weeds are actually delicious.— Kate MacQuarrie

One of her favourite wild plants to use is stinging nettle, which is one of the first spring plants and has many uses in food and medicinally, she said. The dark green plant can be added to smoothies or in pasta, or dried for tea.

In spring, dandelion greens are good in an omelette or salad, and Baker also loves to pick and eat chanterelle mushrooms, with their distinctive light orange colour and wavy edges. Other plants considered weeds such as chickweed, lamb’s quarters, plantain and burdock are also ubiquitous and edible.

‘Part of the eat local movement’

Baker believes during the pandemic more people have been getting out to reconnect with nature, and more have naturally become curious about the plants they are seeing. She said knowing what they are adds meaning to being outdoors.

Kate MacQuarrie couldn’t agree more. She is an experienced biologist and avid naturalist, and a member of the Facebook group who often gives guidance to others and she said she is hearing from more and more people interested in foraging.

“Especially with COVID, people can’t travel and they’re looking for things to do closer to home,” MacQuarrie said. “I think more than that, it’s part of the ‘eat local’ movement, and people are really looking at locally grown food and I think if they can collect it and prepare it themselves, I think it means even more.”

MacQuarrie has hunted, fished and foraged for about 30 years and said in a good year she can procure as much as half of all her own food, as a hobby for her own enjoyment.

Her favourite things are fiddleheads and wild greens including sheep’s sorrel, and in fall she loves harvesting berries, Labrador tea and wintergreen.

“All of those wild greens that are probably in your backyard that you think of as weeds are actually delicious,” she said.

Kelly Rayner joined the Facebook group and showed off her skills making her own maple syrup for the first time from four trees on her property in Harrington.

She said her three-year-old daughter enjoys gardening and picking wild berries, and making the syrup has turned out to be a fun family activity.

“It just kind of occurred to me that we have some maple trees on our property so I thought, why not give it a try?”

Rayner boiled down sap gathered over three weeks to create about a litre of syrup, and it’s tasty. Her daughter enjoyed seeing and tasting the sap flowing from the trees.

“It was pretty easy to do, so I thought it might encourage other people who have never tried it before to give it a shot.”

Members on the foraging Facebook group help others identify certain plants, but Baker and MacQuarrie advise people to do their research very carefully before ingesting anything. Mushrooms in particular can be toxic. Also consider any interaction with medications, Baker said.

Baker and MacQuarrie offered their top tips for foraging.