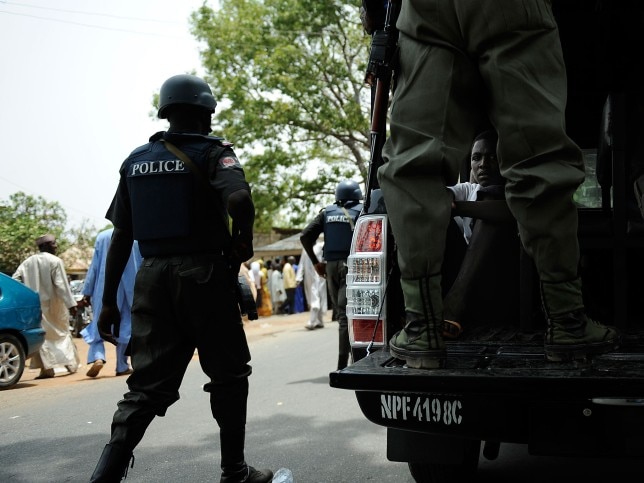 More intriguing is the allegation that the SARS operatives allegedly dumped Eche Israel in the boot of the car after being shot in the waist and driven away.

Some operatives of the Special Anti-Robbery Squad have allegedly shot an electronic dealer at the Alaba International Market, Eche Israel in the Mile 2 area of Lagos State.

According to a report by Punch, this was made known by a family friend, who allegedly witnessed the shooting and called the attention of the Israel family.

More intriguing is the allegation that the SARS operatives allegedly dumped Eche Israel in the boot of the car after being shot in the waist and driven away.

There have been a wide outrage and call on social media platforms by youths and several Nigerians to end the operations of the SARS units.

How it allegedly occurred

The 30-year-old trader had finished from work around 6pm on Friday, December 8, 2017 and was heading home on a motorcycle when he was stopped by the officers.

An exchange allegedly ensued as the victim was said to have queried the officers for stopping him and asked the motorcycle rider to move on.

This move, it was alleged irked the SARS operatives and Eche was subsequently shot in the waist.

The officers were alleged to have shot continuously into the air to scare away residents, who had thronged the scene.

The victim was allegedly put in the boot of the car the SARS men brought and driven away.

Mary Israel, a cousin of the victim, had reportedly said a family friend, who witnessed the shooting, called the attention of the family to the incident.

Mary said they had been to different police stations in the state, including the SARS office at Ikeja, adding that Eche’s whereabouts had remained unknown.

In her words: “He deals in electronics in Alaba market. He had finished the day’s work and was going to his house at Ajegunle around 6pm on Friday when the officers asked him to stop. They parked a red vehicle beside the road.

“They found a Samsung phone on him and some money. The man questioning him was not in uniform, so he argued with him and asked why he was being questioned. The policeman held him by the trousers when he asked his motorcycle rider to move on.

“They shot him in the waist. The motorcycle rider fled. He was thrown into the boot of the vehicle and the policemen drove off.

“They didn’t find anything incriminating on him. He is not a robber or a thief. He has his business and a family. He is a responsible man.

Another family member, Blessing Israel, said the policemen were identified with their police-crested AK-47 guns, adding that one of the men also flashed his ID card at residents when they tried to mob them.

“We have been to SARS Ikeja, Mile 2 Police Station and the Federal SARS at Alagbon. We just returned from the Adeniji Adele Police Station. They all said there was no suspect named Eche Israel with waist injury in their cells. Where else can we go? There has been no word about him since last Friday,” she added.

According to the report, the Lagos State Police Public Relations Officer, SP Chike Oti, had been reached on the allegations but is yet to respond.

Oti was reported to have said he would get back for the confirmation of the allegation.

Meanwhile, a number of 32 operatives of the Special Anti-Robbery Squad (SARS) have been arrested and are being held at federal detention facilities in Abuja owned by the police.