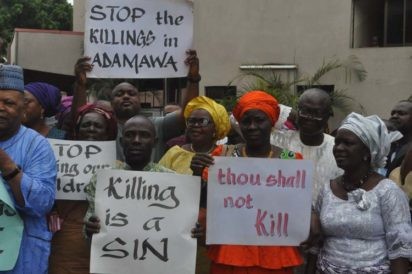 Saraki begs Northern leaders to Help end the killings
ABUJA—WORRIED by the wanton killings and destruction of properties in some parts of the country, Senate President, Dr. Bukola Saraki yesterday, told elders, leaders, stakeholders and elder statesmen from the North that it had become imperative for them to join hands with the Federal and state governments to stop the killings in the land. Killing in the Country: Members of First Baptism Church Abuja Protesting over the killings in Nigeria during Sunday Service in Abuja. Photo by Gbemiga Olamikan. According to the Senate President, peace and unity were very essential if Nigeria as a country must achieve overall development and growth, hence the killings must stop in all its ramifications. Meanwhile, in another development, the people of Kaduna Central and indeed the whole of Kaduna State have thanked the United Nations, UN for adding its strong voice to condemn the mass killings in Birnin Gwari Local Government Area of Kaduna. Saraki who spoke in Abuja when a delegation of the Northern Leaders and Stakeholders Assembly, NLSA, led by its Chairman, Alhaji Tanko Yakasai visited him in his office, also hailed the group for rising up to contribute to realising a peaceful and prosperous country. Saraki who expressed worry over the state of affairs In the country, said: “By this time, as elders, you ought to be resting, but the patriotism in you brought you out. You said you are political but non-partisan, we are all political and we need to get Nigeria in the right direction. “Being leaders, this is the time to find lasting solutions. This is not the time for blame. This is the time for us to bring peace and regional dialogue. No society worth its salt will keep quiet in the face of these killings. “Something, somewhere is wrong. We need to meet to bring about peaceful coexistence and unity in this country. Part of the solution is to know that something is wrong. “I am happy that you are here and we will speak the truth about the problems and to conduct ourselves on how to encourage dialogue and ensure that the right thing is done,” he said. Earlier in his remarks, chairman of the group and leader of the delegation, Yakasai, said that the purpose of the visit was to brief the President of the Senate on the formation of the organisation, including its aims and objectives, adding that the group was not out to get a consensus presidential candidate for the North as being rumoured in some quarters, but to cooperate with Nigerians who share in its vision and mission. Yakasai who noted that the group will look at the problems of armed robbery, kidnapping and herdsmen/farmers clashes and to find a way to resolve them, said that the group will soon organise a Northern political summit to address the identified problems while seeking the support of the National Assembly in hosting the event. Members of the delegation included a former Deputy Senate President, Ibrahim Mantu, former Minister of Defence, Haliru Ballo Mohammed, former Governor of Niger State, Babangida Aliyu, former Governor of Kogi State, Idris Wada, former FCT ministers, Bala Mohammed and Abba Gana, former Minister of Women Affairs, Hajia Inna Ciroma, former gubernatorial aspirant, Dr. Umar Ardo; former Ministers, Hajia Zainab Maina and Dr. Mamman Shata and Senator Joseph Waku, among others.
Share
Facebook
Twitter
WhatsApp
Pinterest
Linkedin
ReddIt
Email
Print
Tumblr
Telegram
Mix
VK
Digg
LINE
Viber
Naver
Previous articleFederal Government to build huge interchange at RCCG camp to stop incessant traffic logjam
Next articleNigeria’s excess oil revenue rises to N22.4bn daily as price hits $77bn per barrel