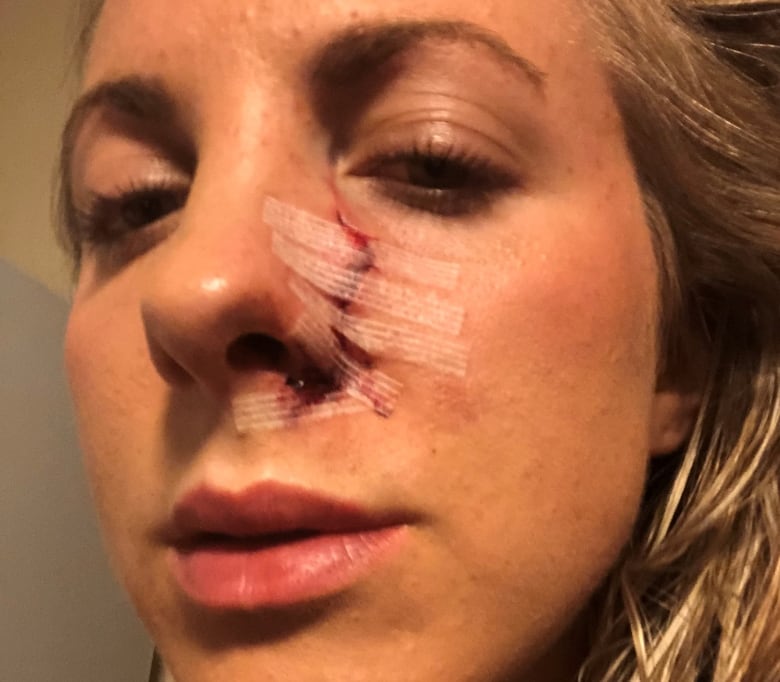 A Dauphin woman is warning other outdoorsy Manitobans to be careful after she was hit in the face by a startled black bear while running in Riding Mountain National Park on Monday afternoon.

Erin McKenzie and her dogs were on the Moon Lake Trail in the park, about 250 kilometres northwest of Winnipeg, running a 10-kilometre loop she does regularly.

She was climbing up a steep hill with her four dogs a few feet ahead, without leashes.

“All of a sudden a black bear just came ripping out of the bush right in front of me, maybe about a foot away,” she said.

“It was clearly spooked, as was I.”

The bear took a swing at her face, cutting her deeply, and then swiped at her back before taking off, she said.

It was all over in a matter of seconds.

“I really thought I was going to die when the bear was hitting me. That was extremely terrifying. I’ve never been that close to a bear or any kind of predatory animal like that,” McKenzie said.

“All I could see was blood pouring down on my shirt and my body and my legs.”

McKenzie had to hike about five kilometres back to her car, where her boyfriend met her in the parking lot and drove her to the hospital.

The cuts on her back are fairly superficial, but the one on her face is quite deep and there’s a risk of infection, she said.

“I think what I’ll just be left with is a pretty ugly-looking scar.”

Other than that, McKenzie says she’s lucky to be alive.

The trail is closed following the attack, according to Jodi Duhard of Parks Canada.

“Human and wildlife safety is of the utmost importance to Parks Canada. The agency takes action to promote coexistence between people and wildlife, to ensure the well-being and safety of both,” she said in an email.

Before it was closed, restrictions on the trail in place since July 10 prohibited dogs, bikes or groups smaller than three because the area is a natural feeding and travelling corridor, she said.

Human and bear interactions have been higher than normal this year, according to Manitoba Conservation and Climate, a government agency that, among other tasks, oversees wildlife.

Last week, three bear cubs were orphaned after their mother was shot trying to get into a house in Pinawa, northeast of Winnipeg.

Part of the problem is things that attract bears, such as bird feeders, Manitoba Conservation said.

“Bird seed can attract bears as well as birds, and with other food sources plentiful for birds in the summer months, people are asked to put feeders away until later in the fall,” the department said in a June bulletin.

McKenzie has hiked and backpacked thousands of kilometres in her life and has seen a lot of wildlife, but she says she got complacent.

“Just be aware of your surroundings and don’t get too comfortable. I think that’s part of the problem, is you get relaxed hiking … and running so often out there without ever having an incident,” she said.

How to be bear safe

“Riding Mountain National Park is home to many black bears, and visitors can encounter a bear at any time or any place, whether it be on a busy trail close to town or in the remote backcountry,” she wrote.

“Bears generally prefer to avoid people. However, encounters between bears and people do occur.”

To reduce the risk of a bear encounter while hiking, Parks Canada says visitors should make noise to let the animals know people are in the area.

“Call out, clap, sing or talk loudly, especially near streams, dense vegetation and berry patches, on windy days, and in areas of low visibility,” Duhard said.

Other suggestions for hikers include:

McKenzie says she’s going to be more careful and wear a bear bell from now on. She also said she made a mistake by wearing headphones while she was running.