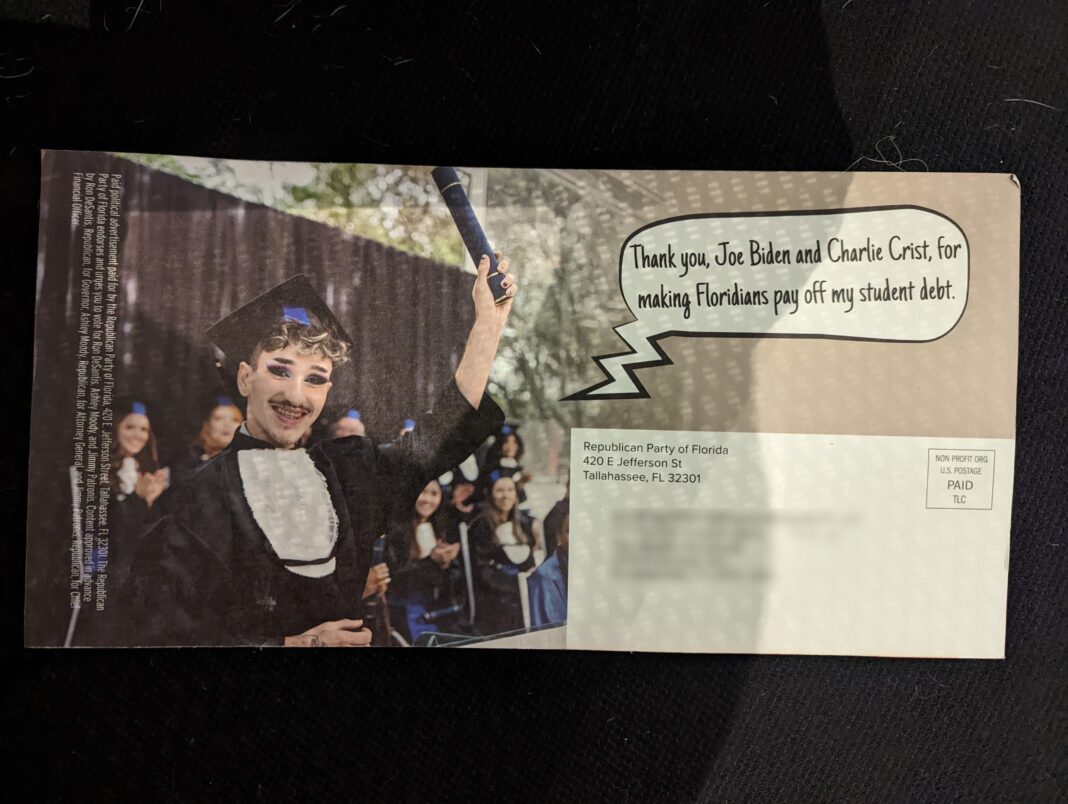 Florida Gov. Ron DeSantis (R) is pushing bigotry and lies in a recent mailer his campaign sent out to voters ahead of next week’s midterm elections.

The mailer attacks DeSantis’ Democratic challenger, Charlie Crist, using a slew of misinformation, including that President Joe Biden’s student loan plan will force “hard working Floridians to pay back student loans for degrees like Gender Studies and French Poetry.” The mailer, which a Fort Lauderdale resident shared with HuffPost, shows a photo of Crist and Biden embracing, above a line that reads: “The Biden-Crist College Loan Bailout will: Make inflation worse; Punish hard-working taxpayers; Reward universities.”

The flier also includes a photo of a student wearing makeup during their graduation ceremony. A speech bubble drawn over their head shows the student saying: “Thank you, Joe Biden and Charlie Crist, for making Floridians pay off my student debt.” The photo appears to be a stock image of a nonbinary student at a graduation.

Neither DeSantis’ office or the Republican Party of Florida immediately responded to HuffPost’s request for comment.

DeSantis is likely to win the governor’s race, boasting a nearly 10% lead in polls ahead of Crist. Some, including Crist and Biden, have criticized DeSantis for running for reelection when it is well known he will likely run for president in 2024.

Anti-LGBTQ rhetoric is nothing new for DeSantis, who has made his name on culture wars that dehumanize LGBTQ kids and people. Earlier this year, DeSantis signed legislation known as the “Don’t Say Gay” bill into law, which effectively forbids teachers from talking about sexual orientation and gender identity in most elementary school classrooms. The legislation sparked national outrage, with LGBTQ advocates criticizing it as hateful and discriminatory.

DeSantis’ success demeaning and erasing LGBTQ folks has led him to campaign on the same issues. His new flier isn’t the first to mock gender studies majors and others interested in gender issues. One mailer sent to Floridians in October claimed that Crist is forgiving student loans for gender studies majors who have used their money on tattoos and piercings.

“I went into debt getting my Gender Studies degree,” the mailer read, Florida Politics reported. “Thanks to Charlie Crist, taxpayers are bailing me out.” The DeSantis campaign included a photo of a white woman with multiple piercings next to the statement.

DeSantis also sent out a mailer to Florida voters that stoked fears around transgender athletes taking away opportunities from cisgender women, likening the situation to what happened when Black athletes first entered professional sports.

Biden slammed DeSantis at a campaign rally for Crist earlier this week, calling out the Florida governor for “demonizing the LGBTQ population.” Biden also suggested that DeSantis is just another bigoted version of former President Donald Trump, and if he wins a second term will likely leave to run for president in 2024.

If you have received any campaign mailers you think we should know about, send us an email: scoops@huffpost.com.