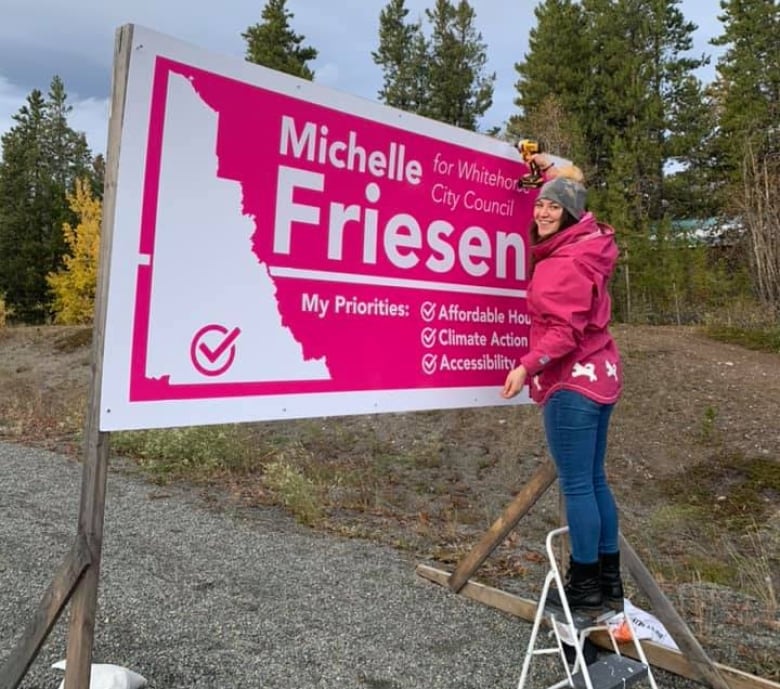 Michelle Friesen is still taking it all in — her election last week as one of Whitehorse’s new city councillors, and the fact that she’ll be the city’s first Indigenous councillor in a generation.

“I’m excited and nervous, because everything’s so new,” she said on Monday morning, after some weekend orientation sessions for the new council.

“I’m really excited to see some diversity at the table, and really happy that everyone who came out to vote made representation and diversity a priority for this council and for our city.”

Murray received the most votes of all 17 council candidates, followed by Friesen.

Friesen, who ran earlier this year as an NDP candidate in Yukon’s territorial election, said part of the reason she ran for city council was to show that “representation really does matter.”

“I want to be able to inspire and encourage other women and other Indigenous youth to know that it doesn’t matter what clothes you’re wearing or how much money you have or what education you might have. Our voices matter. What we have to say is important,” she said.

“We need to be in these places and spaces where decisions about our future are being made.”

Whitehorse is home to two self-governing First Nations — the TKC, and the Kwanlin Dün. According to the Yukon Bureau of Statistics, about 14.7 per cent of Whitehorse’s population in 2020 was Indigenous.

And yet Friesen is the first Indigenous person to win a seat on city council in 30 years. The last — and first — was Ed Schultz, who won his seat in 1991.

Speaking to CBC News in 2018, Schultz said he didn’t actively campaign on his ethnicity at that time, but he did see it as an asset. He also said he was disappointed that, as of 2018, he was still an outlier as an Indigenous city councillor.

“I was hoping, with my time there, it would encourage others to run [for city council],” he said in 2018.

Friesen made her Indigenous identity clear during her campaign, though she didn’t present it as the main reason for her candidacy. She cited housing and climate change as her primary issues, though she’s acknowledged that the city’s First Nations, and Indigenous perspectives, will be key to driving change.

“We’re going to need to work with local First Nations [on housing], who are our largest landowners in the city and just make sure that we are available to support in however we’re needed, to develop those spaces,” she said on Monday.

When it comes to climate change, and how the city should respond, Friesen said she wants to tap into traditional knowledge and the knowledge-keepers, “because they’ve been warning us of climate change for a long time.”

It’s not something she talked about during the campaign, mostly because she didn’t think it was any more relevant than lots of other things about herself and her experience.

“The fact that I’m gay is not something that I have sort of hidden away,” she said.

“Nowadays it’s really not a big deal sort of what your orientation is. I think people are more interested in your vision for the city, your work ethic, your integrity, professionalism.”

Cabott said she’s pleased if she can be a role model.

“If I’m an example … and it helps others think about going into politics, then that’s great,” she said.

Cabott is also pleased with the make-up of the new council. She says she hoped for a diverse group of councillors who would be willing to work hard, and she feels that’s what the city got.

Asked about Friesen, Cabott called her “a real breath of fresh air” who can bring a welcome new perspective to council. Many politically-minded Indigenous citizens have put their work and energy into First Nations governments over the years, Cabott said.

“I think we’re just lucky that Michelle put her name forward and is going to be part of this council, because First Nations are definitely part of this city — so it’s great.”

Jim Butler, longtime editor of the Whitehorse Star newspaper, agrees that the makeup of council is notable, and that Friesen’s election in particular is something to celebrate.

“It’s long overdue … We have to ask ourselves, why has it been so long?” Butler said, referring to the years since Ed Schultz sat on council.

“I’m hoping that we’ve seen the last of those yawning gaps in this type of representation.”

The diversity of council also represents a natural evolution, he says. The city’s demographic makeup has changed dramatically in recent years and is now a “cultural mosaic,” he says.

“It’s only logical that its makeup be accurately reflected in its set of local lawmakers.”

Doug Graham agrees — even though the shifting political winds did not favour him this time.

Graham was a past city councillor and former Yukon Party cabinet minister who came out of retirement to seek another term on council last week. He missed out by a few dozen votes.

“There’s a lot of good young people out there, and they obviously worked hard and I probably didn’t,” he said after the vote.

He was philosophical about his loss, and reflected on his past days as a city councillor when he would attend conferences with other municipal leaders from across Canada.

“I used to joke that it seemed to me every council in Canada was made up of old white guys with white hair,” he said. “I’m really happy to see that’s not the way it is anymore in Whitehorse.”