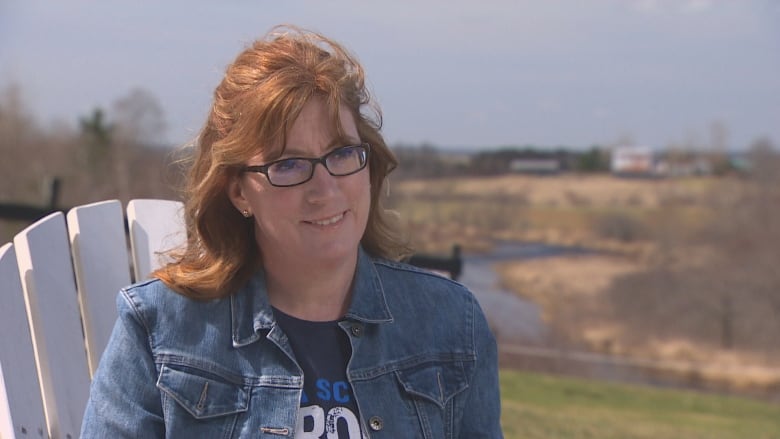 Karen Dean knew her friend Gina wouldn’t want her to be frozen in grief.

In the days after Dean learned Gina Goulet and 21 other people were killed last year, she decided to commission T-shirts and hoodies featuring the phrase Nova Scotia Strong and images of a red heart over a map of the central part of the province.

On April 18 and April 19, 2020, a gunman disguised as a Mountie torched homes and killed neighbours, acquaintances and strangers. The shooter travelled nearly 200 kilometres on rural roads before RCMP shot and killed him at a gas station in Enfield, N.S.

Goulet, who was a single mother and two-time cancer survivor, always embraced life — salsa dancing one minute, horseback riding and bass fishing the next, said Dean.

“Gina was this fiery energy that I always said you didn’t see her walk in a room, you felt her walk in a room because she just had such beautiful energy. And I feel her all the time, as a kick in my butt to get up and do something,” Dean told CBC News.

“She didn’t let anything slow her down or stop her from doing what she wanted to do. And I just thought, I need to keep that energy alive for her, for all of us.”

Dean was among the many Canadians who started fundraising for the families left behind after last year’s mass killing that started in Portapique, N.S. She already ran a clothing business out of her home and within days, Dean and her three kids were processing hundreds of orders in their garage in Middle Musquodoboit, N.S.

“I felt that I was healing by doing some little thing to help,” Dean said.

Long before the Red Cross stopped accepting donations to the fund in the fall, Dean blew past her initial $10,000 goal, donating $96,000 to the fund. She still sells Nova Scotia Strong items, with a portion of profits now going to cancer research.

In all, the Red Cross fund collected $6.2 million. Personal contributions came in from around the world and fundraisers included proceeds from songs, art pieces, community groups and collections at grocery checkouts. Additionally, gifts from corporations made up more than half of the total raised, according to the Red Cross

Since donors may choose to remain anonymous, it doesn’t plan to release a full breakdown of where the money came from.

Money not just divided equally by 22

The organization administered the Stronger Together fund at the Nova Scotia government’s request. It was decided that the money would go to surviving family members, but it wasn’t as simple as splitting it equally, said Bill Lawlor, a director with the Red Cross in Atlantic Canada.

“Dividing the amount by 22 wouldn’t necessarily serve the purpose of the fund nor the families,” he said.

Instead, the organization gathered feedback from how fundraisers were run after other mass casualty events and applied a process the Red Cross uses in other disaster situations, such as floods or forest fires, Lawlor said.

A team of staff met with families virtually and explored each one’s specific circumstances and needs, for instance, by taking into account blended and extended families, and whether someone who died had dependants, was a sole income earner or was a caregiver, he said.

“We were able to sit down and really basically determine what was the impact — understanding that emotional impact was significant for all families that were involved and impacted —  but what were some of the other hardships that were created as a result of the loss of life,” he said.

As of March 31, he said 99 per cent of the fund has been distributed or committed, with some money held back for unforeseen needs that could arise in the next few months.

In the end, 60 per cent, or about $3.7 million, was divided between all the families.

The goal was to “distribute that equitably based on the needs and the circumstances within the individual households and family units,” said Lawlor.

The remaining 40 cent cent was directed to people deemed to have specific and in some cases, more complex financial needs, such as young children.

Lawlor said in some cases, people were hesitant to take any money. In others, families asked that instead of receiving more themselves, they’d like additional money to go to someone or specific people who they felt could use it more.

“In many cases, people will say, you know, ‘thank you very much for your support this far. I will not be requiring any further supports.’ And there’s other cases where people certainly require more support. And that’s precisely why the equitable versus equal conversation is extremely important,” he said.

The Nova Scotia government covered the administration costs associated with the Stronger Together fund, including bank fees, so the donations could all go to families, said Lawlor.

CBC contacted the Nova Scotia government for details on how much overseeing the trust fund cost but the Finance and Treasury Board was unable to provide a figure by deadline.

The Red Cross fundraiser wasn’t the only one established in the wake of the tragedy. There were several separate GoFundMe campaigns and other funds established, such as a Fallen Officer fund created by the RCMP Foundation in memory of Const. Heidi Stevenson.

In the days after the mass shooting, the RCMP also warned of fundraising scams. GoFundMe removed one bogus crowdfunding page that claimed to be raising money for children who lost their parents in Portapique.

Lawlor said over the weeks and months that followed the Red Cross frequently fielded questions from donors curious about where the money would go as well as from members of the public who spotted campaigns pledging to support families.

In those cases, someone from the Red Cross would get in touch and ensure the phrasing connected to a campaign was accurate. Lawlor said they’d explain, if needed, that someone who planned to donate to the Red Cross couldn’t advertise that money would go to one specific family.

Among those who had questions was a group of parents from Humboldt, Sask., where in 2018 a semi-truck collided with a bus carrying members of a junior hockey team, killing 16 and injuring 13 others.

In the wake of that tragedy, a fundraising campaign became one of the largest in GoFundMe’s history and a man who set up a fake fundraiser was convicted of fraud.

A representative from a charity in Humboldt that wanted to donate to the families in Nova Scotia got in touch, Lawlor said.

“A parent reached out. We had a very extensive conversation. They wanted to know exactly how this would be [used]  — it was very important to them. They had, of course, very first-hand experience with a mass casualty or loss of life within their community,” Lawlor said.

Though some families connected to the mass shootings also had questions about the process, Lawlor said the response has been positive.

He said families most often put the money they receive toward basic expenses such as rent or mortgage payments, and the hope is that it could relieve some of the financial strain associated with missing work or losing someone who provided income relied on in a household.

“Our hope is, is that people who use it in the most meaningful way to them — what do they need to do for the impact of the loss of a loved one? And really, that’s what the intentions were. It was never about trying to, quote unquote, make them feel better because of the loss of life. No amount of funds would ever do that.”