RCMP extend manhunt to Manitoba and Alberta after stabbings in Saskatchewan 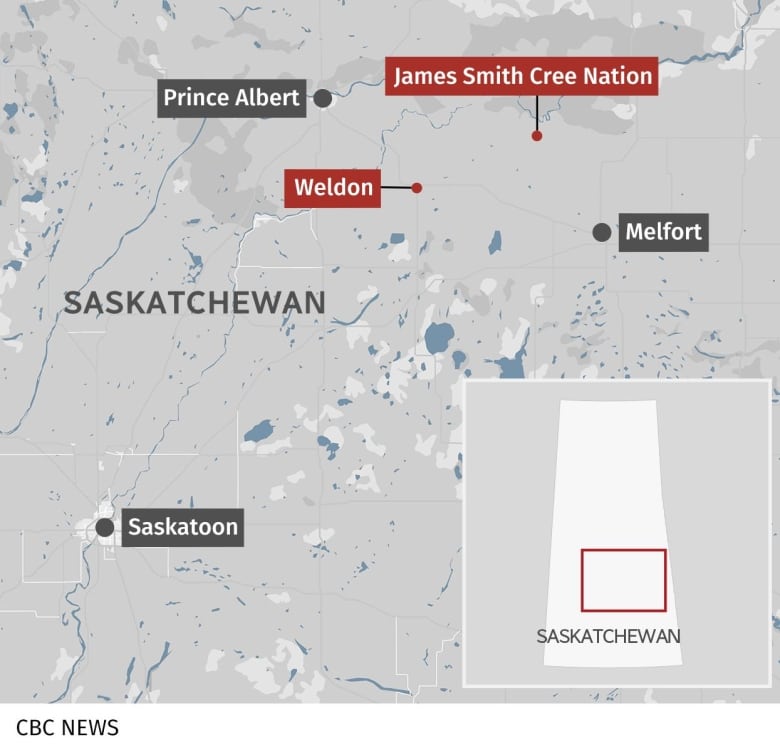 Melfort RCMP have issued a provincewide dangerous persons alert after multiple people were stabbed in the James Smith Cree Nation and Weldon, Sask.

RCMP said they will be holding a press conference to discuss the alert at 3:40 CT.

RCMP said they received a report that the two suspects, identified as Damien Sanderson and Myles Sanderson, may have been traveling in the Arcola Avenue area in Regina. Regina Police said the suspects were seen around 11:20 a.m.

“As the suspects are at large, we have also asked for the alert to be extended to Manitoba and Alberta,” RCMP said in a news release Sunday afternoon.

They released that information just after noon CT Sunday.

In the alert issued at 8:20 a.m. CT Sunday, they said two male suspects are believed to be in a black Nissan Rogue with Saskatchewan licence plate 119 MPI. As the suspects may have access to a vehicle, the RCMP have expanded the alert provincewide.

Police are asking Regina residents to take precautions and consider sheltering in place. RCMP said residents should be careful about allowing others into their home and to not leave a secure location.

A 10 a.m. CT update from the Saskatchewan RCMP said there are multiple victims in multiple locations and it appears victims are being attacked at random.

In response to the “mass casualties” on James Smith Cree Nation the community, along with the Chakastaypasin Band of the Cree Nation and Peter Chapman Band, declared a state of emergency at noon Sunday.

Myles Sanderson is listed as being six foot and one inch tall and 240 pounds, with black hair and brown eyes.

The alert was first issued at 7:12 a.m. CT Sunday and has since had several updates.

Residents in the Regina area are also being advised to not approach suspicious persons and to not pick up hitchhikers.

Instead, the RCMP said they should report suspicious persons, emergencies or information to 911.

They are also being asked to not share the locations of police.

Police checkpoints have been set up throughout Saskatchewan, at least from Prince Albert to Regina, with officers checking identification.

Mark Oddan, a STARS air ambulance spokesperson, told CBC News said two of those helicopters were sent from Saskatoon and one from Regina.

The first crew from Saskatoon triaged patients at the scene, and the second aircraft brought a physician to the scene to lead the response.

With the physician included, there were 13 crew in total who attended the scene.

The three STARS ambulances transported one patient each to the Royal University Hospital in Saskatoon. Two patients were taken from the scene and one was transported from the hospital in Melfort where they had arrived via ground ambulance.

Anne Lindemann, a spokesperson for the Saskatchewan Health Authority (SHA), said in an email the health authority activated its emergency response process to answer the “influx of casualties,” including calling for additional staff.

The SHA did not specify how many people were injured in the stabbings or if any deaths had been confirmed, but said multiple people are being triaged and cared for at multiple sites.

“As with any incident with a high number of casualties, our emergency preparedness teams are responding to the evolving needs to ensure patients are triaged and cared for appropriately,” it said.

In Prince Albert, police said officers are occupying checkpoints across the city.

Residents are being asked to stay at a secure location and to be cautious around letting anyone inside their home.

In Regina, police are “actively investigating on several fronts to locate and arrest the suspects,” the service said in a news release.

“In addition, RPS has deployed additional resources for public safety throughout the city, including the football game at Mosaic Stadium.”

The Labour Day Classic CFL football game between the Saskatchewan Roughriders and Winnipeg Blue Bombers is scheduled to continue as planned with an increased police presence in the area, including in Mosaic Stadium.