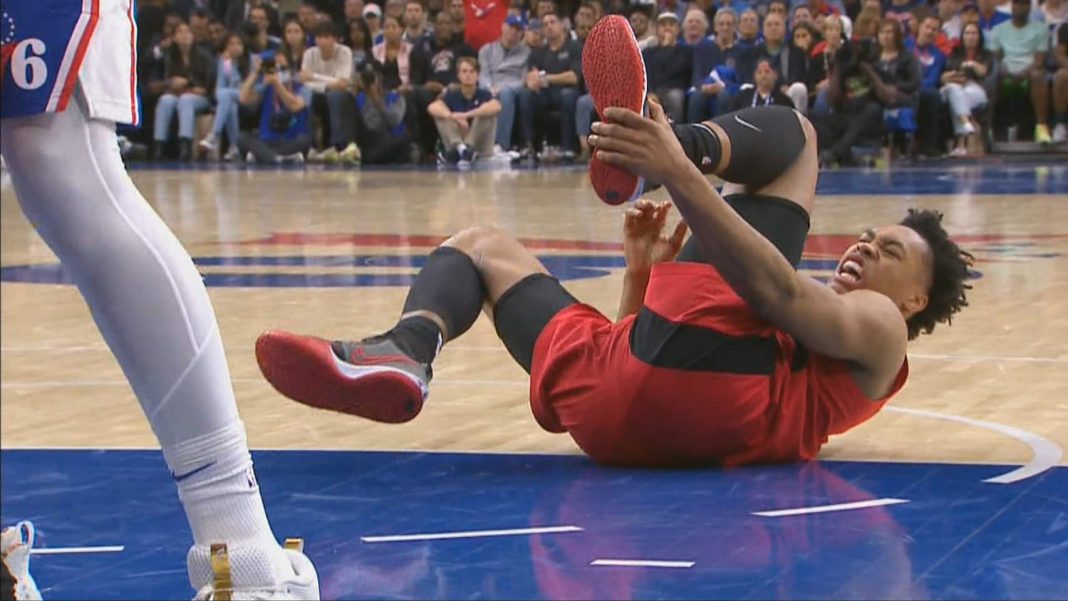 If a 20-point loss at Philadelphia wasn’t painful enough, the Raptors lost prized rookie Scottie Barnes to an ankle injury, and saw all-star guard Fred VanVleet foul out of the game with almost a quarter still to play.

Raptors coach Nick Nurse had predicted a slug-fest against Philly, and the Sixers obliged on Saturday.

“I’m not surprised [the 76ers] were highly motivated and ready to go,” Nurse said. “I think there’s a lot of expectations on them. I think they were going to try to bully us right off the floor and deliver a blow to see if we’ll go away. Now we’re going to find out if we will or not.”

Tyrese Maxey scored 21 of his playoff career-high 38 points in the third quarter Saturday to stuff any Raptors’ hopes of a comeback, and the 76ers beat Toronto 131-111 in Game 1 of the opening-round playoff series.

Pascal Siakam had 24 points while OG Anunoby chipped in with 20 points on a rough night for the Raptors.

Barnes had 15 points, 10 rebounds and eight assists in an excellent playoff debut before Sixers’ 280-pound centre Joel Embiid stepped on the rookie’s foot sending him sprawling to the floor in agony with 9:06 to play. VanVleet had 18 points and six assists before leaving the game on the same play.

“For a young rookie in his first playoff game on the road against a really good team, I thought he looked like he belonged out there,” Nurse said of Barnes, whose X-rays were negative. He’ll undergo more imaging on Sunday. 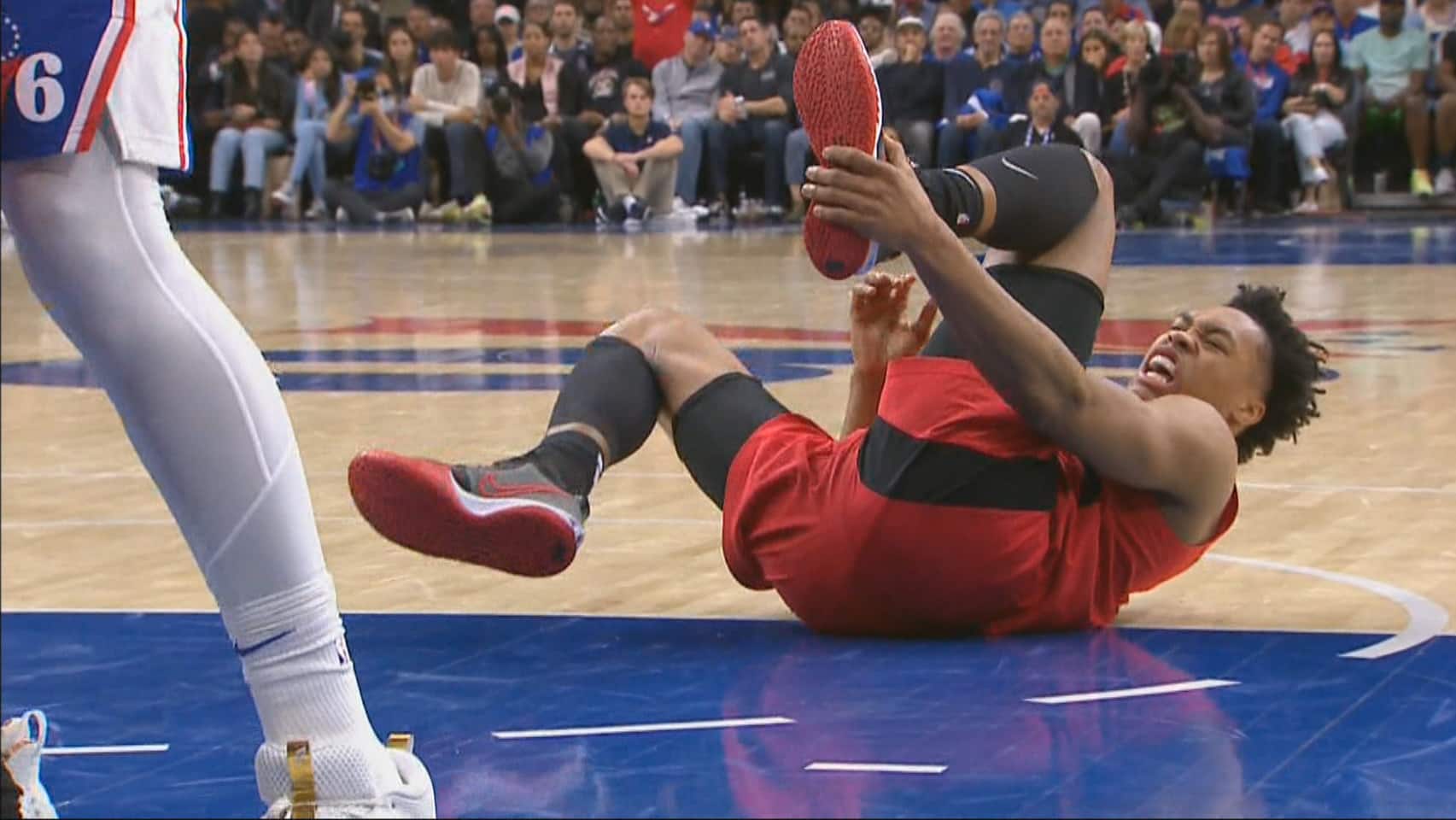 Raptors rookie Scottie Barnes left the game after spraining his ankle in Toronto’s 131-111 loss, in the first game of their NBA playoff series against the Philadelphia 76ers. 1:50

Embiid had 19 points and 15 rebounds.

Game 2 of the best-of-seven series is Monday at Philadelphia, and the Raptors, who are 5-17 in playoff-series openers, find themselves in a familiar hole.

“We could have lost by 50 tonight, and it’s one game,” Siakam said. “Obviously we know that we’ve got to play better than we did tonight to have a chance to win against them. So we’ve got to go back, watch the film, get better at it . . . but it’s the nature of playoffs, ups and downs, and we’ve got to be able to maintain the same focus and intensity when things are not going our way.

“We can have the most amazing game plan, but if you don’t have the intensity to kind of match that, it’s gonna be tough to beat a team like that.” 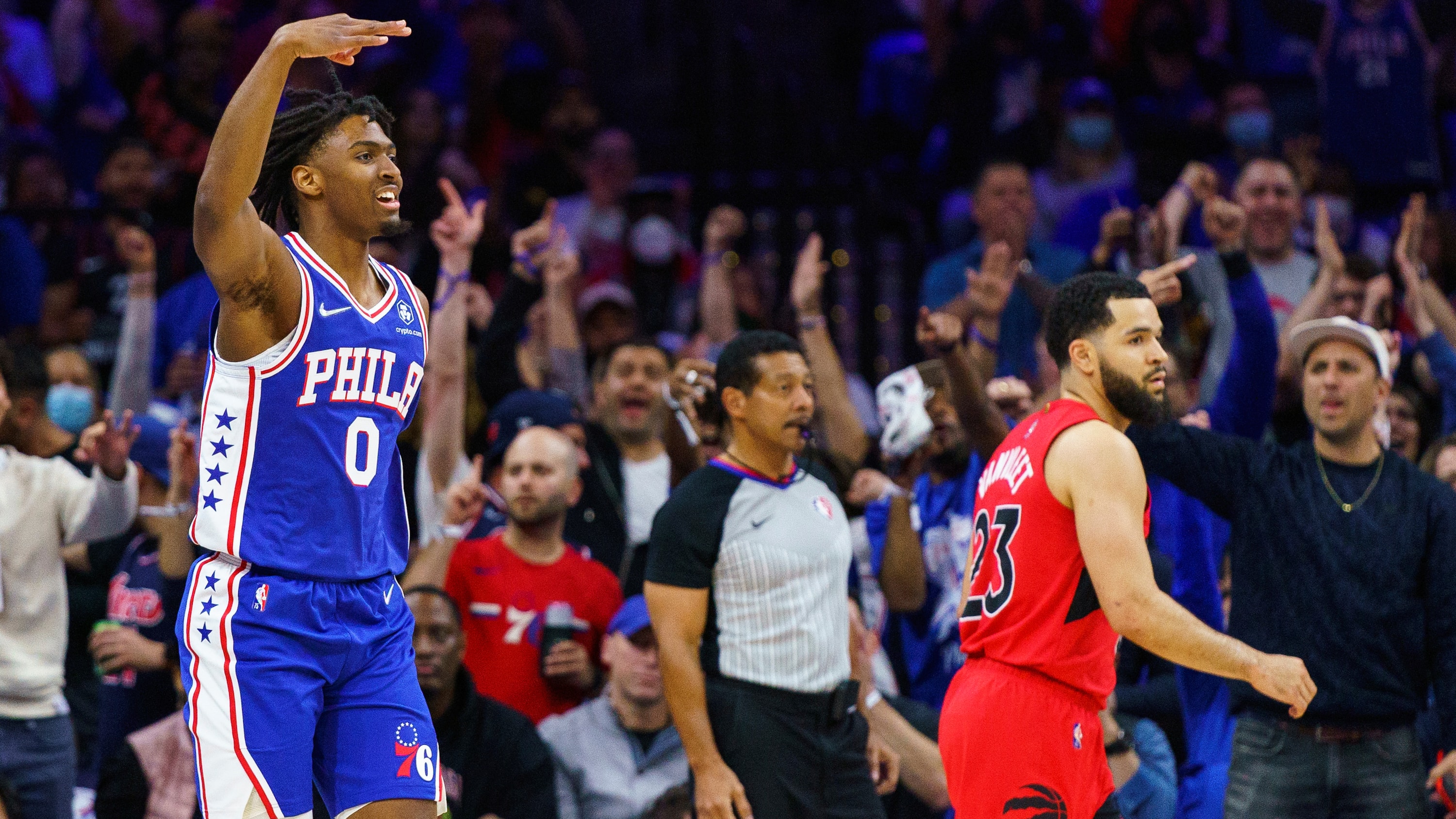 Tyrese Maxey scored a game-high 38 points as the Philadelphia 76ers beat the Toronto Raptors 131-111 in the first game of the NBA playoff series. 1:42

In the first post-season meeting between the Atlantic Division rivals since Kawhi Leonard’s buzzer-beater in the 2019 conference semifinals, and barely a week after the Raptors clawed back from a 17-2 deficit to beat Philly in Toronto, there was no late-game heroics on Saturday.

The Sixers’ 21-point lead in the second quarter had become 24 by early in the third. Precious Achiuwa drove past Embiid and picked up a foul. His three-point play at 5:56 of the third capped a 10-2 run that sliced the difference to 11 points and breathed some life into the Raptors.

But James Harden, who had 22 points and 14 assists in his first playoff game as a Sixer, buried a three, made a layup, and then shoved a two-handed bounce pass to a sprinting Maxey for a high-flying layup that put Toronto back up by 18.

‘We just weren’t ourselves in a lot of areas’

“We just weren’t ourselves in a lot of areas, whether that’s just being disruptive,” VanVleet said. “A lot of what we do is predicated on our aggressiveness and our length and making plays on the ball, causing turnovers, blocking shots. And whether that was jitters from some of the newer guys or the [referee’s] whistle or whatever the case may be, were just a little slow . . . they won the physicality battle.”

The Raptors unravelled in the fourth and Shake Milton’s three-pointer with 7:34 to play put Philly up by 23 in front of the raucous Wells Fargo Arena crowd that included rapper Meek Mill and retired boxer Floyd Mayweather Jr. Maxey’s jumper with 3:19 to play had the Sixers up by 22 and both Nurse and Philly coach Doc Rivers emptied their benches soon after.

The Raptors’ identity is about turning teams over and winning the offensive rebound battle, but the Sixers beat the Raptors at their own game. Philly grabbed 10 offensive boards to Toronto’s seven, and committed just four turnovers to the Raptors’ eight.

“I would imagine that was probably number one on their list of emphasis going into the game,” Nurse said. “We’ve had a lot of success on the glass with them on the both ends and rebounding is a lot about just straight desire, hustle, and speed and physicality. And they had all of those just a notch ahead of us tonight.”

The Raptors won their regular-season series 3-1 versus Philly, and, like the 76ers, finished the season on a roll, winning 14 of 18 down the stretch.

But the Sixers dominated from the outset Saturday, grabbing six offensive boards in the first quarter to Toronto’s two. They built a 10-point lead and led 35-27 to start the second.

A running dunk from Anunoby capped a 5-0 Raptors run to open the second quarter. It sliced the difference to just three points, but the momentum was short-lived as the Sixers replied with a 9-0 run and by the time Harris knocked down a three with 1:12 left in the half, Philly was up by 21 points. The 76ers led 69-51 at halftime.

The series heads home to Toronto for Games 3 on Wednesday and 4 next Saturday. Because of the COVID-19 pandemic that saw the 2020 season end in the Disney World “bubble” and a 2021 season that saw the Raptors tumble down the standings amid a COVID-19 outbreak to finish 12th in 2021, it will be the first time Scotiabank Arena has hosted playoff basketball since Game 5 of the NBA Finals.

In Toronto on Saturday, fans gathered in “Jurassic Park” outside Scotiabank Arena to watch the game on the giant screen. Fans hadn’t gathered there to watch playoff basketball in 1,045 days, since the Raptors beat the Golden State Warriors to win the 2019 NBA championship.

The series will head back to Philly for Game 5, if needed.