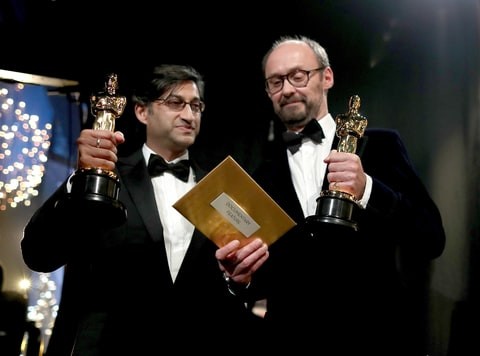 When The View is live, anything can happen at the Hot Topics table.

For the past 20 years, viewers have started their day with ABC’s daytime series. And while we can usually expect a high-profile interview and a fair share of political talk every hour, there are also the times things go a bit off script.

While some moments are innocent and harmless, they definitely had people asking: What the heck is happening?

As The View celebrates their 20-year anniversary this week, we decided to look back at just some of the WTF moments from the past two decades.

And just a warning: Some live TV memories just can’t be explained. Perhaps that’s what makes The View so great.

During Hot Topics, the ladies were discussing body issues and Lena Dunham‘s decision to go topless on Girls. After showing a clip from the HBO series, Sherri and Jenny had some fun when they went “Topless.” “We’re jumping on the bandwagon,” Sherri joked. Jenny added, “We want more ratings too.”

During one show in January 2016, Candace found herself not feeling her best. About 20 minutes into the broadcast, the Fuller House star decided to walk off during a commercial break. While some thought that her departure was because of a tense Hot Topics discussion, viewers later learned that she really was not feeling too hot. “I left the show today b/c I didn’t feel well, not because of the discussion,” Candace clarified on Twitter. “Saw the Doctor- low blood sugar & tested positive for fluB.”

If you can sense some tension, you are not alone. When Kathy appeared on The View to promote her book, one co-host didn’t exactly seem interested in giving the comedian a platform. During the interview. Elisabeth was spotted yawning and stretching her arms before sharing her view. “You’ve said things here that are untrue and not so funny,” Elisabeth shared. “Do you then feel weird coming here and sitting here?” Kathy responded, “Actually this moment I live for so bring it.”

5. The View Signs Off 3 Minutes Early

After the show returned from its final commercial break back on June 7, 2016, Whoopi ended the show a whole three minutes early. To help fill the empty time, the ladies began discussing Taylor Swift and Calvin Harris‘ romance before it was officially time to say goodbye. “We want to thank you for coming, because we’re proud to have a live audience. We are live every day, unlike very many people,” Whoopi shared while making the time pass by.  “We want you to have a great day and take a little time to enjoy whatever view you happen upon.”

When discussing the flu shot and whether or not her co-hosts receive it year after year, Whoopi let out some audible gas that caused her to get up and excuse herself. “Hold on a minute,” she joked as co-host Rosie O’Donnell fanned the table. “I feel so much better now.”

3. Every Time the Ladies Opened Up About Their Sex Lives

For a show that sometimes airs as early as 10 a.m., the co-hosts aren’t afraid to talk about sex baby. In the primetime special The View: 20 Years in the Making, ABC compiled just some of the moments where the ladies discussed the birds and the bees. From Paula Faris‘ confessions about “ministry time” to Barbara Walters receiving a “basket of vibrators,” you never knew what would happen next.

When discussing President Barack Obama‘s stance on Park51, a Muslim community center that would be built two blocks from Ground Zero, Bill proclaimed it was “inappropriate.” After some co-hosts disagreed with his stance, the Fox News host said something that shocked Joy and Whoopi. After Bill declared that “Muslims killed us on 9/11,” the duo stormed off the set. “I don’t want to sit here,” Joy proclaimed while walking away. “I don’t.” Bill would later apologize and state, “If anyone felt that I was demeaning all Muslims, I apologize.”

1. Sherri Shepherd Wonders if the Earth Is Round

Back in 2007, Sherri shared a few words that would follow her for many years to come: “Is the world flat? I’ve never thought about it.” After getting some flack, the comedian was able to poke fun at herself when addressing it on The View years later. “It was my first week here. It was a lot of ladies talking and I got adult ADD. Everybody was talking at one time. I was trying to figure out if my cable was going to get cut off and this is what happened,” she said in 2016. “Brain fart. I want to say the Earth is round. You know it, I know it.”