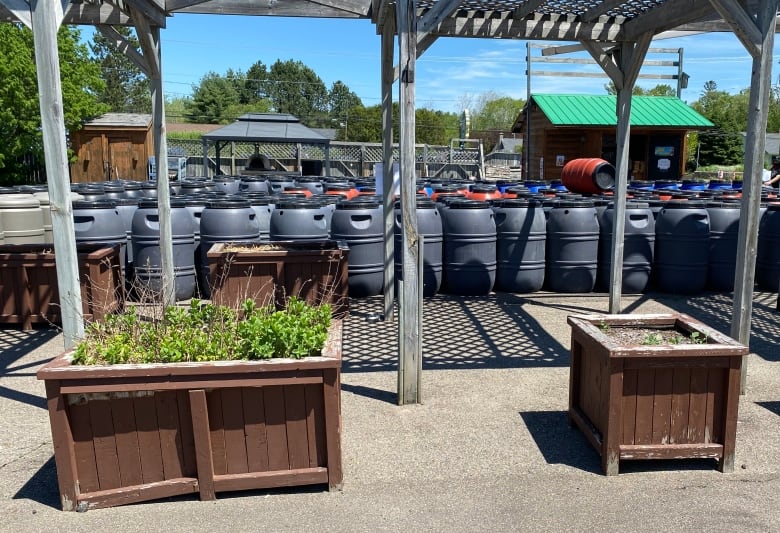 Last year’s hot, dry summer, an increased interest in home gardening, and a rising awareness of the effects of climate change have people turning to rain barrels.

Macx MacNichol, owner of ECO-Containers in Dorchester, converts food-grade plastic containers into rainwater-harvesting systems ranging in size from 205 litres to 1,000 litres and priced from $45 to $205.

He buys the used containers from different industries in and around Moncton. MacNichol said they’ve been harder to come by since the pandemic started because some of his suppliers have closed, and others aren’t as busy.

Coupling that with an increase in demand for his product means, “every barrel that comes in today, is spoken for tonight,” said MacNichol.

“There’s a number of people who are calling this year that are concerned about wells,” said MacNichol.

Dozens of people in Memramcook saw their wells run dry after last summer, he said, and it’s a bad feeling when the water runs out.

“You’ve got sand coming out of your tap, it’s not a pretty sight,” said MacNichol.

He sells systems at the Sackville Farmers Market, and he also puts on do-it-yourself rain-barrel workshops for environmental and watershed groups in the area.

Amanda Marlin, executive director of EOS Eco Energy, said her group has been hosting the well-attended DIY workshops for years.

She said people are becoming more concerned with how climate change is affecting the weather, in this case precipitation patterns.

“We’re seeing it rain less frequently and when it does, it can be quite the downpour,” Martin said.

As a result, people are starting to treat rain as a resource, one that can help mitigate the effects of drought.

“I think last summer especially stands out for people,” said Marlin. “I know that it does for me.

“I mean, it was certainly a struggle to water our gardens and you kind of think, ‘Why am I trying to keep geraniums alive right now?'”

Marlin said a simple food-grade container with a spout and something to keep the bugs out can make a big difference in decreasing water consumption and, depending on where you live, water bills.

Last fall her group bought and gave away 30 wooden rain barrels built at the Historic Acadian Village in Bertrand.

“People snatched them up in less than a day.”

Last Saturday in Fredericton, Alex Boyd, executive director of Greener Village, said more than 300 people picked up their new rain barrels as part of a fundraiser.

Greener Village helps feed up to 1,200 families in the Fredericton area each month, and Boyd said rain barrels were a natural fit.

“We want people to grow food, we are very big on gardening, we have greenhouses here, gardens on our property, [where] we grow produce to give to our clients,” said Boyd.

But he had no idea the barrels would go so well.

“We filled the truck before our deadline for ordering was even coming up,” said Boyd.

He credits a growing interest in home gardening and a general support for his organization with the hundreds of orders.

Not just in New Brunswick

RainBarrel.ca operates out of Stoney Creek, Ont., and supplied Greener Village with its rain barrels.

Larry Pomerantz said his 10-year-old business was growing steadily until COVID-19 “exploded the growth and the interest” in his product.

Pomerantz sells repurposed plastic containers converted to rain barrels in bulk in a multitude of colours and sizes to non-profits and municipalities.

He estimated he’s sold 20,000 rain barrels this year, and he’s only halfway through his season. He said he’d normally sell that number in a year.

Pomerantz has seen an especially high demand this spring in Nova Scotia, and now New Brunswick is also on his radar.

“We’re seeing many more trucks heading out that way,” but he notes sales are also up in  Alberta and the U.S.