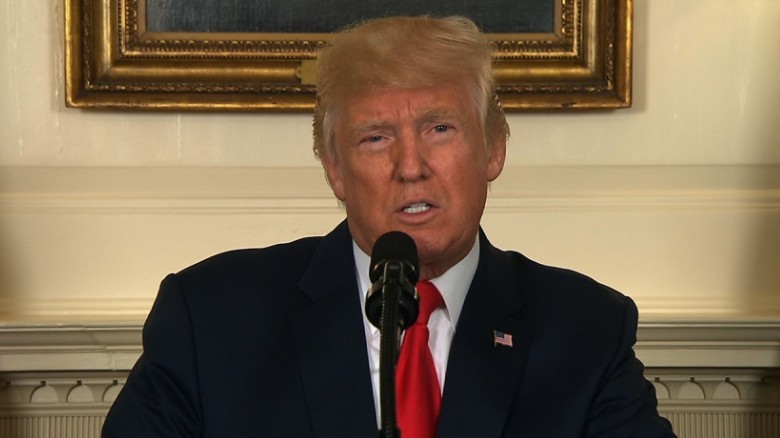 President Trump moved Monday to quell growing public outrage over his tepid response to the weekend violence in Charlottesville, condemning the Ku Klux Klan and neo-Nazis by name and declaring racist hate groups “repugnant to every­thing we hold dear as Americans.”

In a hastily arranged appearance at the White House, Trump vowed that his administration would hold the perpetrators of violence at a white supremacist rally fully accountable and said that such displays of hatred and bigotry have “no place in America.”

“Racism is evil, and those who cause violence in its name are criminals and thugs, including the KKK, neo-Nazis, white supremacists and other hate groups,” Trump said in brief remarks in the Diplomatic Reception Room.

Trump’s statement came two days after he did not specifically condemn the “Unite the Right” rally Saturday, when a driver who had espoused racist and pro-Nazi sentiments killed a woman and injured 19 others by slamming his car into a crowd. Trump’s apparent reluctance to single out white nationalists in Charlottesville contrasted sharply with his frequent eagerness to highlight violence in cases involving minorities, including Islamist terrorists and illegal immigrants.

In his initial public comments Saturday, Trump characterized the objectionable behavior in Charlottesville as coming from “many sides” — prompting fierce blowback from Democrats, civil rights groups and some Republicans, who said his failure to single out white supremacist organizations was tantamount to a presidential endorsement of their intolerance.

Senior aides said Trump has long chafed at expectations to bow to political correctness, but they acknowledged that he was frustrated by how he was being characterized by the media. Trump’s reluctance to admit he had erred — and his grudging discomfort at having to clarify his position — were clear from the tenor and optics of his remarks.

Entering the Diplomatic Reception Room, the president opened by touting the health of the economy, noting that stock markets are near record highs and the unemployment rate is hovering at a 16-year low. And though Trump has regularly employed the phrase “radical Islamic terrorism” to describe other attacks in the United States and the Middle East, he chose not to echo Attorney General Jeff Sessions’s conclusion that the violence in Charlottesville met the Justice Department’s definition of “domestic terrorism.”

“As I have said many times before, no matter the color of our skin, we all live under the same laws, we all salute the same great flag, and we are all made by the same almighty God,” Trump said. “We must love each other, show affection for each other and unite together in condemnation of hatred, bigotry and violence.”

Trump’s political rivals said the president had undercut the effectiveness of his public message by waiting so long to deliver it. And they continued to press him to take stronger actions to distance his administration from the alt-right, a loose coalition of conservatives and fringe groups that promote a nationalist agenda that critics have said operates in service of a racist and xenophobic ideology.

As Trump’s approval ratings have fallen over his first seven months to well under 40 percent, the president has sought to consolidate support among his base.

“From the beginning, President Trump has sheltered and encouraged the forces of bigotry and discrimination,” House Minority Leader Nancy Pelosi (D-Calif.) said in a statement calling on Trump to fire senior adviser Stephen K. Bannon, a self-proclaimed alt-right leader.

Pelosi said that Trump’s “failure to immediately denounce white supremacy is well in line with the unmistakable conduct of his administration toward immigrants, Muslims, and communities of color.”

Inside the West Wing, a battle for influence over Trump has been waged since the beginning of his presidency, between alt-right forces and more moderate ones. National security adviser H.R. McMaster has been a recent target of character attacks from Bannon’s allies outside the White House.

Sen. John McCain (R-Ariz.) issued a statement Monday citing the “disgraceful” attacks on McMaster from the alt-right and linking the movement to “the same purveyors of hatred and ignorance who precipitated the recent violence in Charlottesville.”

White House aides had defended Trump’s handling of the Charlottesville violence as a good-faith effort to tamp down anger on all sides and rejected accusations that he has sought to mollify white supremacist groups.

But pressure mounted even among Trump’s allies. On Monday morning, Merck chief executive Kenneth C. Frazier, who is black, announced his resignation from Trump’s American Manufacturing Council, saying it was a “matter of personal conscience” and calling on the nation’s leaders to “honor our fundamental values by clearly rejecting expressions of hatred.”

Trump — who returned to Washington on Monday after a week of vacation at his golf resort in Bedminster, N.J., to sign an executive action on trade — lashed out at Frazier on Twitter, calling on his company to lower drug prices. The president then met privately with Sessions and FBI Director Christopher A. Wray to discuss details of the federal investigation into Charlottesville.

The Justice Department has launched a civil rights probe into the death of Heather Heyer, 32, who was killed when a car allegedly driven by James Alex Fields Jr. of Ohio slammed into a group of counterprotesters. White supremacist groups — carrying Nazi and Confederate flags and, in some cases, armed with shields, batons and firearms permitted under Virginia’s open-carry laws — clashed with counterprotesters, some of whom fought back with pepper spray.

“There’s no bigger case right now that we’re working on,” Sessions said on “CBS This Morning.” “Every resource that’s needed will be dedicated to it.”

The civil rights investigation could take months, according to Justice officials. One department official said the probe will not be limited to the driver of the car and will examine whether others were involved in planning the attack.

Federal agents and prosecutors will have to find “proof of motive” to bring a federal hate crime charge, and they will interview friends and relatives of the suspects and examine any associations they might have with extremist organizations.

“We need to watch closely to see whether Sessions follows through,” said Kristen Clarke, president and executive director of the Lawyers’ Committee for Civil Rights Under Law.

Other Trump critics worried that significant damage has already been done.

“While today’s delayed words are welcome, they should have been spoken on Saturday,” Vanita Gupta, president of the Leadership Conference on Civil and Human Rights, said in reaction to Trump’s remarks. “This unconscionable delay has undermined his moral credibility as our nation’s leader.”

Trump called Heyer’s death tragic and said that it “fills us with grief, and we send her family our thoughts, our prayers and our love.”

He also praised the service of two Virginia state troopers, H. Jay Cullen and Berke Bates, who died Saturday in a helicopter crash while on duty monitoring the march.

“These three fallen Americans embody the goodness and decency of our nation,” Trump said. “In times such as these, America has always shown its true character, responding to hate with love, division with unity and violence with an unwavering resolve for justice.”

But during another photo-op in the afternoon, Trump bristled when a CNN correspondent asked why he had waited so long to condemn the white supremacist groups and had refused to answer questions from reporters.

“I like real news, not fake news,” the president said. “You are fake news.”

And in a tweet several hours later, Trump complained: “Made additional remarks on Charlottesville and realize once again that the #Fake News Media will never be satisfied . . . truly bad people!”

Ashley Parker contributed to this report.