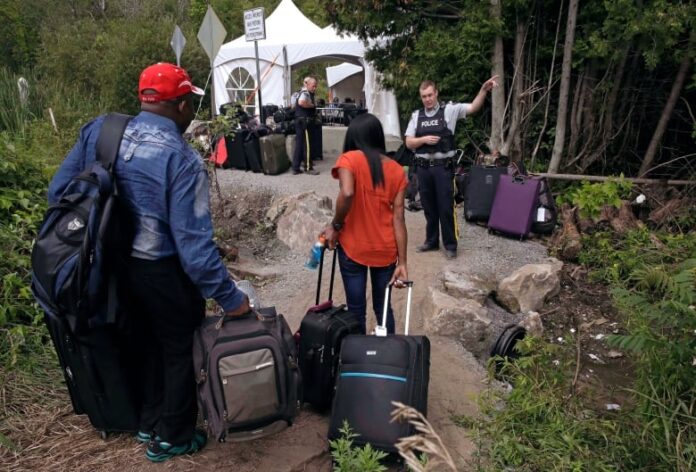 Sarah watches her four-year-old daughter jump around a play structure she’s not allowed on because of the pandemic.

They’re just happy to be outside.

For eight days, Sarah — an asylum seeker from Haiti who crossed the U.S. border into Quebec at Roxham Road three years ago — was bedridden in their small Montréal-Nord apartment, her body feverish and aching.

It had started with some coughing and a slight fever she had tried to brush off at first. Her manager at the private long-term care residence in Ahuntsic where she works as an orderly wasn’t happy when she’d asked to stop working, for fear of bringing the infection home to her asthmatic daughter.

Then more symptoms appeared. She was nauseous, and the cough and fever got worse. A test a couple days later confirmed she had COVID-19.

Now on the mend, three weeks after testing positive, Sarah says: “I’m proud. I was on the battlefield.”

Sarah is far from the only asylum seeker working on the front lines of the COVID-19 pandemic.

Many ‘guardian angels’ are asylum seekers

Marjorie Villefranche, executive director of Maison d’Haiti in Montreal’s Saint-Michel district, estimates that about 1,200 of the 5,000 Haitian asylum seekers the organization has helped since 2017 have become orderlies.

Frantz André, who helped found the Action Committee for People without Status, an advocacy group that helps asylum seekers settle in Montreal, says there are many more who’ve flown under the radar.

Asylum seekers make up a large portion of the “guardian angels” Quebec Premier François Legault has praised in his daily briefings — the orderlies, or préposées aux bénéficiaires (PABs), working in long-term care homes — who have no guarantee they’ll be allowed to stay in Canada.

“As quickly as they can, they want to find a job — and they’re being directed to jobs that no one else wants to do: the caregivers, PABs, security agents,” André said.

Without status, on the front lines

He and other refugee advocates have been calling on the Canadian government to allow asylum seekers already in the country to stay.

Many of them are hired by temp agencies, which offer people eager to work easy access to the labour market. For seniors’ homes desperately short of staff, the agencies are a source of cheap labour, but they operate with little government oversight.

The workers are often shuffled from facility to facility — a practice Quebec’s public health director, Dr. Horacio Arruda, has acknowledged is contributing to the spread of COVID-19 in long-term care centres, known in the province as CHSLDs.

André says the long hours they put in make the workers more prone to catching the virus and spreading it to their families.

He says it explains why Montréal-Nord, a low-income neighbourhood filled with newcomers, has the highest number of cases in the city.

“When you’re tired, you don’t eat well. You will go back home, and there’s four, five, six and sometimes seven people living in a [one-bedroom]. The chances of the people catching it, the family catching COVID-19, is greater than anywhere else,” André says.

It is also difficult for orderlies working for agencies to adhere to the province’s request that they work in only one long-term care residence, because accepting shifts wherever they’re asked to go is the only way to cobble together full-time work.

Another woman CBC spoke with works part time for a private residence and part time for an agency, providing home care. Bouncing between visits to patients’ homes and shifts at the long-term care residence increases the risk of spread, but the woman said she feels she has no choice.

Problematic use of agencies predates pandemic

Long-term care homes have long been reliant on temp agencies to fill staffing holes — and the people the agencies sign on are most often women and newcomers to Quebec.

“Even before the pandemic, they had a lot of trouble finding people to do the orderly work,” said Prof. Nicolas Fernandez, a specialist in the relationship between health-care workers and patients who teaches family and emergency medicine at Université de Montréal.

“The short-term solution is to go to agencies.”

The reliance on temp agencies puts additional stress on CHSLDs struggling to contain outbreaks, said Fernandez, who has also served as a translator for asylum seekers.

CBC reached out to both federal and provincial departments requesting statistics on PABs, including how many are asylum seekers. Quebec’s Labour and Immigration ministries said they did not collect that information.

The Health Ministry didn’t provide a breakdown either, but offered up figures showing the vast majority of PABs are women — 34,821 of 42,340 in both private and public facilities. The average salary in 2019 was $40,551.

Fernandez says the job of a PAB is gruelling and crucial: they are the backbone of CHSLDs.

From the moment they wake up, most residents require extensive care — at least three hours a day — to have qualified for a bed.

“In order for the person to feel cared for, and not just a number, you need someone who is going to be there every day,” he said.

Sarah worked for two agencies to gain work experience after she finished her PAB course last year. She hated it — travelling as far away from Montreal as Saint-Jean-sur-Richelieu, in the Montérégie, a 50-minute commute made longer by the stops the agency’s van made to pick up other workers.

“There’s no stability. Every time, you’re sent to a different place. It gets really stressful,” she said.

For the past couple of months, Sarah has worked in the same private long-term care facility in Ahuntsic.

She loves her work. She likes helping and caring for people. It’s a far cry from the job she had in Haiti, working with a sports organization, but she hopes to be able to stay in Canada and work her way up in the health-care field, possibly becoming a nurse.

In the midst of this crisis, Sarah hopes the federal government recognizes how much asylum seekers have contributed to Canadian society and finds a way for them to stay.

“I hope the government will hear our calls, hear our voices.”

Those calls grew louder on Thursday, with a community group devoted to the rights of Haitians who crossed into Canada in 2017 asking the provincial and federal governments to implement a special immigration program for those working in CHSLDs.

“We find it hard to believe that these guardian angels may be expelled from the country once the battle is won,” the Concertation haïtienne pour les migrant.es said in an open letter.

“We are counting on your leadership to make a humanitarian gesture to these citizens who are fighting alongside us every day.”

Immigration, Refugees and Citizenship Canada responded to a CBC inquiry about whether the federal government was considering giving asylum seekers already in Quebec special status.

A spokesperson said in an emailed statement that the government would stick with the current process.

“Our immigration system continues to be based on compassion, efficiency and economic opportunity for all, while protecting the health, safety and security of Canadians,” spokesperson Shannon Ker wrote.