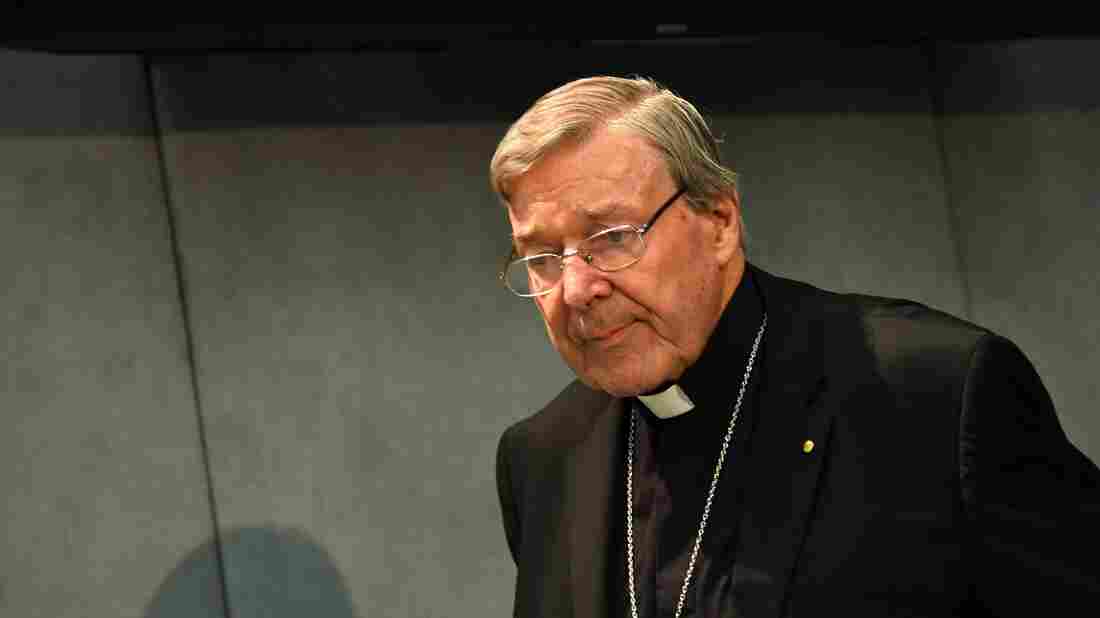 Australian Cardinal George Pell looks on as he makes a statement at the Holy See Press Office in Vatican City on June 29, after being charged with historical sex offenses. Pell has since returned to Australia to face the charges, which he denies. Alberto Pizzoli/AFP/Getty Images hide caption

Australian Cardinal George Pell looks on as he makes a statement at the Holy See Press Office in Vatican City on June 29, after being charged with historical sex offenses. Pell has since returned to Australia to face the charges, which he denies.

Cardinal George Pell, an advisor to Pope Francis, has returned to his home country of Australia to face allegations of sex abuse in years past.

Australia announced the charges against Pell late last month. Pell says he he innocent and promises to fight the charges. He has taken a leave of absence for the trial, but says he plans on returning to his powerful post in the Vatican.

Pell, 76, landed in Sydney on Monday, The Associated Press reports. The wire service reports the cardinal “declined to comment” to press in Singapore, where he was changing planes; he avoided reporters entirely after landing in Sydney.

“On Monday, the Sydney archdiocese said the cardinal had made multiple stops on his journey to Australia to avoid long-haul flights, based on the advice of his doctors,” the AP reports. “Last year, Pell said he was too ill to make the long flight back to his home country to testify before a government inquiry into how the Catholic Church and other institutions have responded to child sex abuse allegations.”

Pell was a priest in Australia in the ’70s and ’80s, and is now one of the most powerful cardinals in the Vatican, as NPR’s Laurel Walmsey wrote in late June.

The charges against him involve “multiple complainants,” as the Victoria Police put it. Pell calls the accusations “relentless character assassination” and has vowed to clear his name.

Thomas Doyle, a former Catholic priest and a columnist for the National Catholic Reporter, told NPR last week that before these allegations, Pell had already been criticized for his treatment of victims of clerical sex abuse.

While Pell was the archbishop of Sydney, for instance, a man sued the archdiocese over childhood sexual abuse. “Pell instructed his lawyers to fight the civil charges as vigorously possible,” Doyle said. “He wanted him used as an example so that other people would not have the audacity to sue the Catholic Church.”

Pell later testified, under oath, that this was his strategy. Another church official told the courts that the Catholic Church actually had evidence to support the claims of abuse that they were so aggressively fighting in court.

Given that history, some people found it surprising that Pell was given a powerful role at the Vatican. Pell is the top financial adviser to the pope, while Pope Francis has pledged to have zero tolerance for sexual abuse within the church.

Until recently, Pell was accused of mishandling assault cases, not of carrying out assaults himself. But last year Victoria police revealed they were investigating charges that Pell, too, committed sexual abuse.

“The whole idea of sexual abuse is abhorrent to me,” Pell told reporters last month as he denied the allegations.