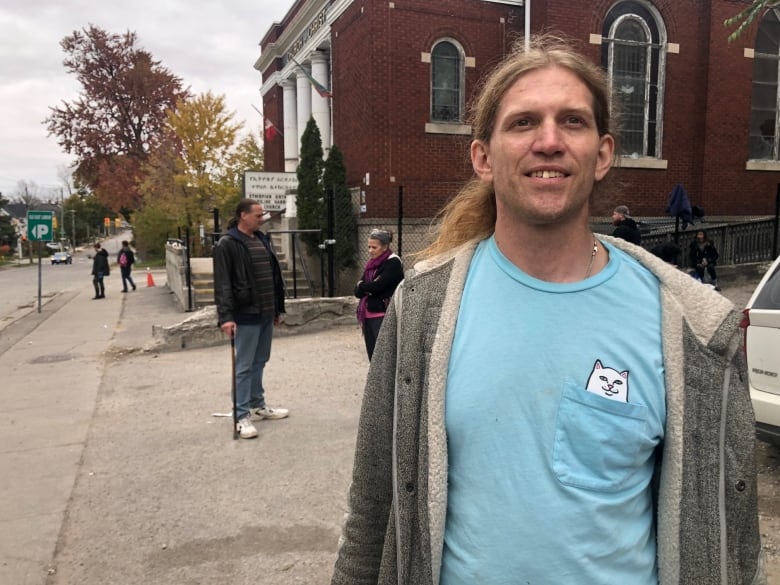 Every Tuesday, Mary McCarty and a group of volunteers sets up a small table outside a London, Ont., church to hand out free cannabis and cannabis edibles to a line of people that often runs well down the block.

She’s part of a group called the Cannabis Substitution Program, a volunteer-run organization that hands out free cannabis and cannabis edibles to people who use drugs.

The group claims “high-dose” edibles — as much as 100 mg of tetrahydrocannabinol (THC) served in baked goods — can serve as a treatment and replacement for opioids and other drugs.

The cannabis is donated and paid for by private citizens, it says.

McCarty and other volunteers have been handing it out in London since April, with similar initiatives in Halifax and Vancouver.

“I thought, ‘You know what? London needs one of these,'” McCarty said. “It’s ridiculous what’s going on.”

She said she’s seen first hand how cannabis has changed the lives of people suffering from addiction.

“People come and thank us all the time.”

But evidence supporting the claims is scarce, a researcher says.

“I’m not aware of any evidence to suggest that would be effective as a substitute for opioid-related dependence and addiction,” said Steven Laviolette, professor in the School of Medicine and Dentistry at Western University in London.

Laviolette’s research focuses on neurobiological and developmental mechanisms underlying various psychiatric disorders, including opioid addiction. He said high doses of THC may even be counterproductive in trying to give up opioids.

“THC has been shown to cause overactivation of addiction pathways in the brain,” he said. “It could make it even worse because THC would be ramping up the brain’s addiction pathways and could potentially make problems like relapse and withdrawal an even greater issue for people suffering with opioid dependence.”

But he said that doesn’t mean cannabis products can’t be used to help treat addiction.

He has conducted research into the use of cannabidiol (CBD), another compound found in cannabis, in treating amphetamine addiction.

“We were able to show that it quite literally blocked the activation of these drugs on the dopamine neurons, so the neurons would stop firing in the presence of CBD,” he said. “That has really strong implications for CBD as an anti-addiction treatment.”

He said there has been promising research in the United States about CBD as a potential aid in treating opioid addiction as well.

While THC may not be an effective treatment for opioid addiction, said Laviolette, it may be helpful with some of the symptoms of opioid withdrawal  — like nausea and tremors.

“To be honest, weed will never cure dope sickness,” said Stefan Nichol, outreach director at Impact Church, and a supporter of the substitution program. “But it does help people sleep through a day of it.”

Word has caught on that edibles are available, and while volunteers are only doing handouts for about two hours per week, as many as 200 people will line up.

McCarty said the next step is a permanent storefront in London to help provide low-barrier access to cannabis for people who can’t afford to purchase from other retailers.

She plans to move to Winnipeg soon, and intends to start another program.