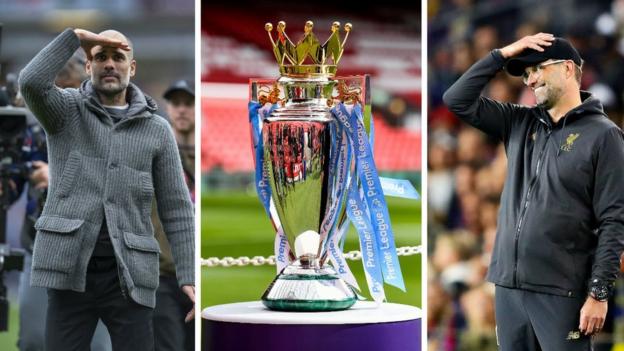 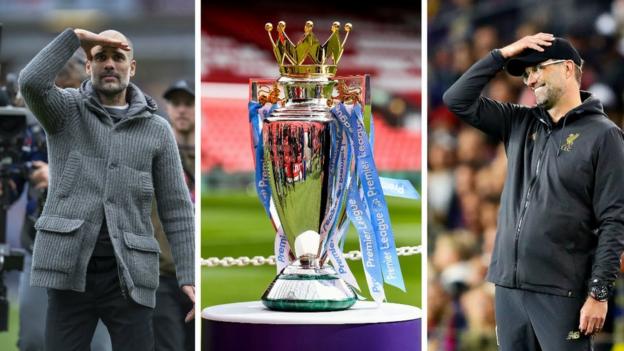 Liverpool are bidding to becoming the first team to overtake the Premier League leaders on the final day as they look to wrest the title from champions Manchester City.

The Reds, who host Wolves, are one point behind leaders City, who visit Brighton – with both games on Sunday at 15:00 BST.

It is the eighth Premier League title race to go down to the final day.

Champions League finalists Liverpool have not won the league since 1990.

It has been a title race of the highest quality, with City winning their past 13 league games and Liverpool winning eight in a row. Neither side have lost a league game since January.

With City on 95 points and Liverpool on 94, whoever finishes second is guaranteed to have the highest final points total of any runners-up in English top-flight history.

The Reds come into the game high on confidence after reaching the Champions League final with a stunning 4-0 victory over Barcelona on Tuesday, after losing the first leg 3-0. They face Tottenham in the Madrid final on 1 June.

City are looking to become the first team to win the English domestic treble. Pep Guardiola’s side beat Chelsea on penalties in the Carabao Cup final and face Watford in the FA Cup final next Saturday.

Those cup finals are on the back burner until the Premier League title is decided, however.

“We think about Wolves,” said Liverpool boss Jurgen Klopp, who has not won a major trophy since the 2012 German double with Borussia Dortmund.

“You get millions of messages and nobody speaks about the weekend. It’s all ‘unbelievable’ and ‘all the best in the final’ but we play Wolves now.

“It doesn’t make Tuesday night’s achievement any smaller. It was for sure one of the best moments in football history, not only Liverpool. But it has nothing to do with the weekend except that we should be confident.”

The title lead has changed hands a record 32 times – albeit including several weekends that Liverpool have played their game first. The Reds need to make that 33 to win the league.

Liverpool were seven points clear of Manchester City until the champions beat them 2-1 on 3 January in what remains the Reds’ only league defeat this season.

“It’s a dream to be here. I didn’t expect… to be in the position that we are now,” said Guardiola, who can become only the third manager after Sir Alex Ferguson and Jose Mourinho to win consecutive Premier League titles.

“We’re going to play well, strong mentally, knowing it’ll be tough. It’s better to focus on what we do. If we win, we don’t have to look at anything else.”

Neither of the title chasers’ final-day opponents have anything left to play for. Wolves are guaranteed seventh spot, which will be enough for a Europa League place if City beat Watford in the FA Cup final. Brighton are safe from relegation, sitting five points above Cardiff City.

There is still a mathematical chance of City and Liverpool finishing exactly level on points, goal difference and goals scored, which would mean a one-off title play-off at a neutral venue to decide the champions.

Is this the closest title race ever?

On all seven previous occasions that the Premier League title has gone down to the final day, the team who started the day top have won it.

The closest Premier League title race ever saw Manchester City beat Manchester United on goal difference in 2012. That remains the only time the lead has changed hands in the ‘as it stands’ table on the last day.

Sergio Aguero’s injury-time winner against QPR denied United the chance to be the first team to start the day second and win the Premier League.

Only once have the second-placed team blown the chance to win the Premier League on the final day. In 1995 Blackburn lost 2-1 to Liverpool at Anfield but still won the title.

Manchester United would have won the league had they beaten West Ham, but they drew 1-1.

The last team to start the final day of the English top flight at the top of the table and not win the title were Liverpool in 1989, when Michael Thomas’ dramatic injury-time goal gave Arsenal the 2-0 win they needed at Anfield to secure the old First Division title.

Who will win the Golden Boot?

Liverpool’s Mohamed Salah, fit again after missing Tuesday’s famous European victory with concussion, is looking to win his second consecutive Golden Boot and he leads the way on 22 goals.

But three players have a realistic chance of at least sharing the Golden Boot – with Reds team-mate Sadio Mane, Manchester City striker Sergio Aguero and Arsenal’s Pierre-Emerick Aubameyang all on 20 goals.

It is likely to be the lowest top-scoring total since 2010-11 when Dimitar Berbatov and Carlos Tevez shared the Golden Boot with 20 goals each.

What else is up for grabs?

The only issue other than the Premier League left to be decided is the battle for fourth place – and even then it is highly unlikely to change on the final day.

Fifth-placed Arsenal are three points behind Tottenham with a worse goal difference, meaning the Gunners would need to win at Burnley and Spurs would have to lose at home to Everton, with a swing of eight goals.

Arsenal can still qualify for the Champions League if they beat Chelsea in the Europa League final on Wednesday, 29 May in Baku.