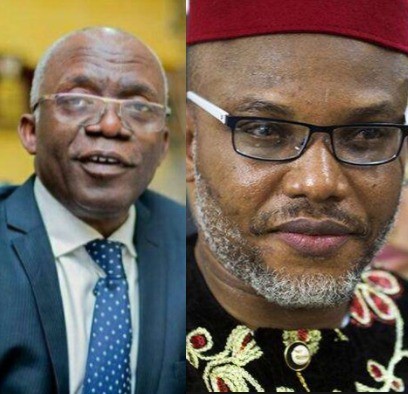 Humanrights lawyer, Femi Falana, says that the life of the leader of the now-outlawed secessionist group, IPOB, might be in danger following the recent clash members of his group had with military officers in Umuahia, Abia state. Falana also said that he might have relocated to the UK to join his family. In an interview with Punch, Falana said when Kanu was campaigning for the creation of Biafra, he never threw away his British passport.

“Mind you, the fellow and his wife and children are British citizens. He may have left the country to join his family in the United Kingdom. While campaigning for Biafra he never threw away his British passport. I hope he has not run away so that he does not jeopardize the liberty of his sureties. It is an irony that Kanu, who is leading the struggle for the Balkanization of Nigeria, has dual citizenship, while Mr. Shettima Yerima, who gave the notice to quit to Igbo people in the North lives in Lagos” he said.

When asked if Kanu’s life might be in danger, Falana said

“For sure. When armed soldiers invaded Odi in Bayelsa State or Zaki Biam in Benue State, they killed scores of people. Everybody’s life in Nigeria is in danger. Nigerians are shot dead in their homes by armed robbers or on the roads by soldiers or policemen or by armed herdsmen on their farms. So, it is a risky business to survive in Nigeria. Even President Muhammadu Buhari had to be flown to Britain for medical attention because his life was in danger here. So, nobody is safe in our country”.