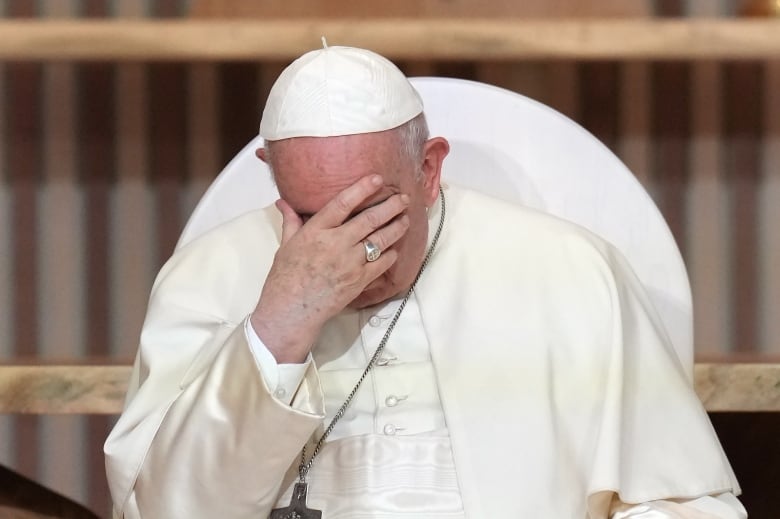 The former Manitoba senator who chaired the Truth and Reconciliation Commission of Canada says there’s a “deep hole” in the apology issued by Pope Francis Monday for the role Catholics played in Canada’s residential school system.

Murray Sinclair says the historic apology, although meaningful to many residential school survivors and their families, fell short of Call to Action 58 in the final report.

It specifically called on the Pope to issue an apology “for the Roman Catholic Church’s role in the spiritual, cultural, emotional, physical, and sexual abuse of First Nations, Inuit, and Métis children in Catholic-run residential schools.”

In a written statement Tuesday, Sinclair said the intent was that survivors would not only hear remorse, “but an acceptance of responsibility for what they were put through at the hands of the church and other institutions.”

While he called it a “historic apology,” he said the Pope’s statement “has left a deep hole in the acknowledgement of the full role of the church in the residential school system, by placing blame on individual members of the church.”

Pope Francis delivered the apology Monday in Alberta at the site of the former Ermineskin residential school, one of the largest in Canada, as he started what he called his “penitential pilgrimage.”

“I ask forgiveness, in particular, for the ways in which many members of the church and of religious communities co-operated, not least through their indifference, in projects of cultural destruction and forced assimilation promoted by the governments of that time, which culminated in the system of residential schools,” he said.

Sinclair said it’s important to highlight that the Catholic Church was not just an agent of the state, but “a lead co-author of the darkest chapters in the history of the land.”

Sinclair says Catholic leaders who were driven by the Doctrine of Discovery — a 15th-century papal edict that justified colonial expansion by allowing Europeans to claim Indigenous lands as their own — as well as other church beliefs and policies enabled the government of Canada, and pushed it further in its work to commit what the TRC called the cultural genocide carried out on Indigenous people in Canada.

That was often “not just a collaboration, but an instigation,” he said.

“There are clear examples in our history where the church called for the government of Canada to be more aggressive and bold in its work to destroy Indigenous culture, traditional practices and beliefs,” Sinclair’s statement said.

“It was more than the work of a few bad actors — this was a concerted institutional effort to remove children from their families and cultures, all in the name of Christian supremacy.”

Sinclair says reconciliation requires action, and the Catholic Church must work to assist in restoring culture, beliefs and traditions destroyed through assimilation.

“For the children and descendants of survivors, it is not enough that you have stopped abusing them,” he said. Rather, the church must help them recover, and “as well as commit to never doing this again.”

The Pope will continue his pilgrimage throughout the week to meet with First Nations, Métis and Inuit survivors in Quebec and Nunavut. Sinclair hopes the pontiff will take his words to heart.

“There is a better path that the church — and all Canadians — can indeed follow: taking responsibility for past actions and resolving to do better on this journey of reconciliation.”