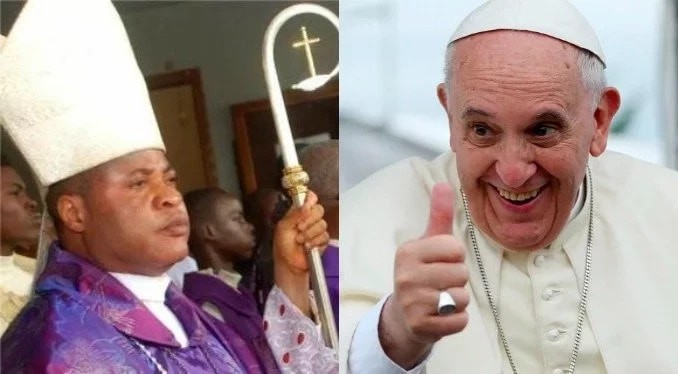 CATHOLIC priests and laity of Ahiara Diocese (Mbaise) in Imo State have said that they cannot accept Bishop Vincent Okpaleke as the prelate of the diocese until the injustice against them was reversed.

They also maintained that they were not against the authority of the Pope, but insisted that they should be given some time to heed to the sudden summons of both the clergy and laity of the Diocese to Rome by the Pope.

Okpaleke, a priest from Onitsha Ecclesiastical Province, was consecrated a bishop for Ahiara Diocese on December 7, 2012, at Seat of Wisdom Seminary, Ulakwo in Owerri North Local Government Area of the state after the death of the first bishop, The Most Rev. Dr. Victor Chikwe.

He has since then been operating outside the diocese.

The priests also claimed that the Pope was misinformed about the goings-on in the diocese by the representatives of the Catholic Church in the Vatican City, just as they added that it was time to correct the injustice meted out on them.

They said the diocesan priests had overtime made frantic efforts to make their case known to the Pope, but regretted that those efforts were nipped in the bud by the Nigerian representatives of the church in Rome.

“This is because they don’t want us to uncover their anomalies before His Holiness. The series of letters we have written to the Vatican City through them were treated with ignominy,” the priests alleged.

Briefing journalists after an ecclesiastical mass/rally at Mater Ecclesiae Cathedral (seat of the Diocese), the President of the Mbaise Indigenous Catholic Priests, Reverend Father Augustine Ekechukwu, contended that the diocese paraded the highest number of priests in Nigeria with high academic degrees in different disciplines and wondered why no priest from the Presbyterium was elected to take over the mantle of leadership of the diocese.

Ekechukwu further said the diocese needed a bishop from the Presbyterium, who understood the operational and administrative mode of the diocese.

“Why should a bishop be consecrated outside his diocese with the Papal Bull read there? The bull gives the bishop authority over his diocese.

“With that bull read at Ulakwo, Okpaleke belongs to Ulakwo and not Ahiara and there is nothing like Ulakwo Diocese in Nigeria. What has happened was a well calculated plot to undermine the priests of the Ahiara Presbyterium,” he stated.

In the same development, The Rev. Fr. David Iheanacho noted that the priests were not calling for a bishop of Mbaise extraction for the diocese but a prelate (no matter where he comes from) who is incardinated in the diocese.

Citing the Canon law, he stated that since Okpaleke had not taken the authority of his diocese after three months of his consecration, he had circumvented that aspect of the law.

He averred that Okpaleke was currently not acceptable to the diocese sequel to the process that ushered him as a bishop.

Iheanacho said, “Ahiara Diocese and Mbaise people are one happy and prayerful family. We celebrated the mass and held rosary procession/rally for God’s intervention in the struggle.

“We will continually and tenaciously believe in one holy Catholic and apostolic church and professing one baptism for the remission of sins.”

Speaking on behalf of the laity, the former chairman of the diocesan council, Chief Festus Nguma, noted that the laity were solidly behind the priests in the struggle for a bishop of their own to be given them.