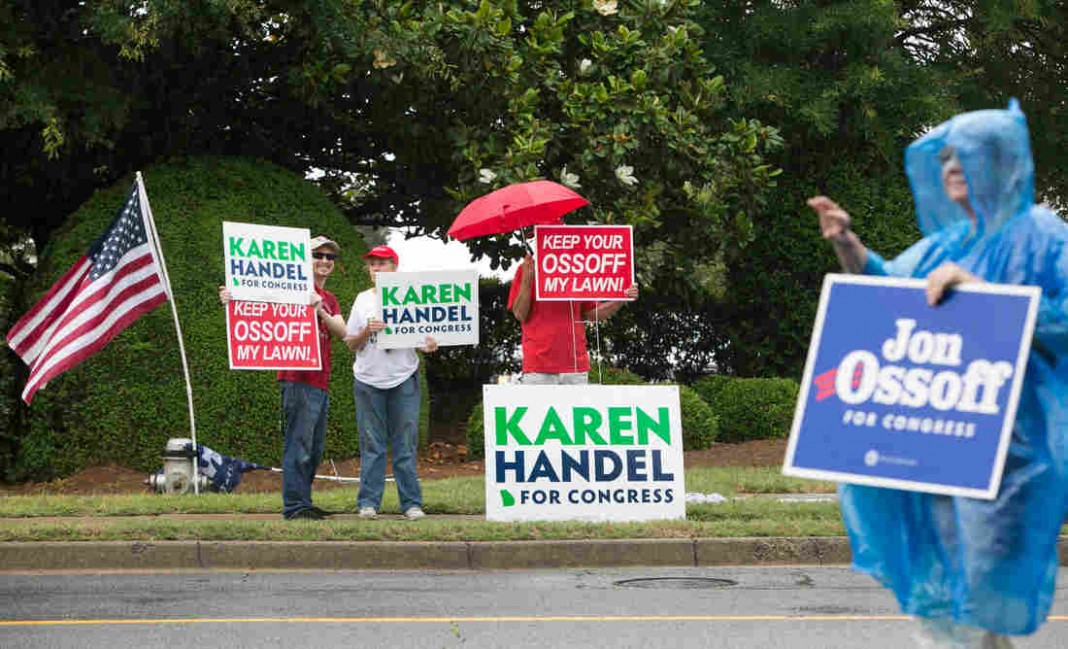 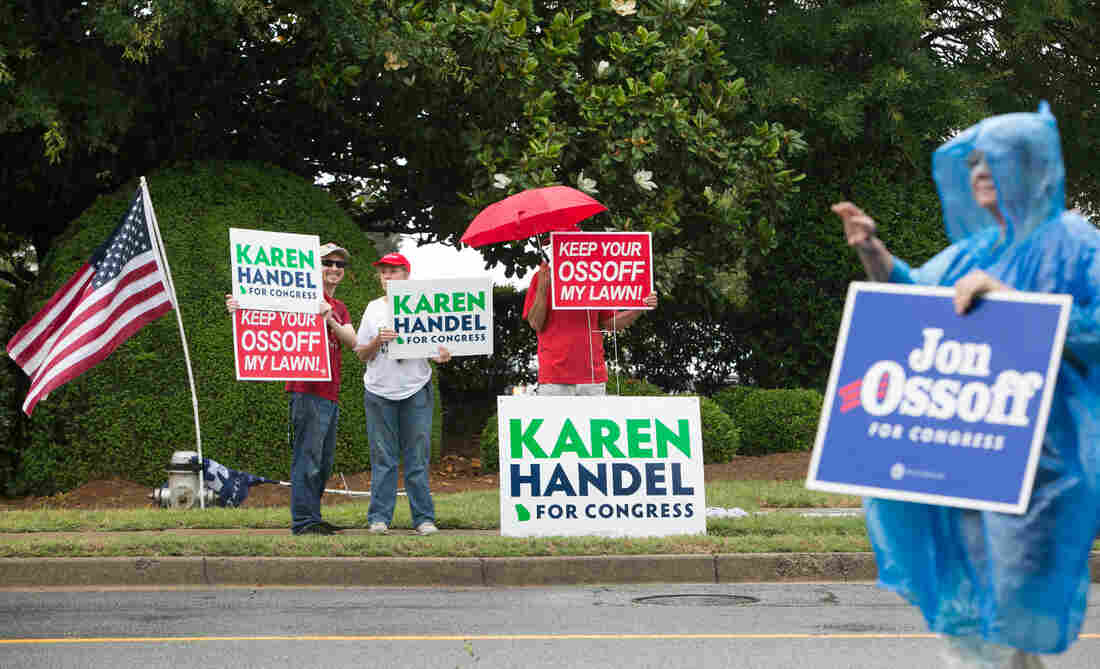 Supporters of Democrat Jon Ossoff and Republican Karen Handel campaign outside of the East Cobb Government Center on Tuesday in Marietta, Ga., on voting day for the Georgia special election.

The most expensive House race in U.S. history has nearly come to an end, as polls closed in the closely watched special congressional election in Georgia’s 6th Congressional District at 7 p.m. ET.

Democrat Jon Ossoff and Republican Karen Handel are locked in a battle to succeed now-Health and Human Services Secretary Tom Price in a race that has been framed by some as a referendum on President Trump. The more than four-month-long battle smashed spending records after Republicans and Democrats poured in more than $50 million combined to try and pull out the victory. Heading into Election Day, polls showed the two in a virtual tie.

Early voting turnout was already extremely heavy for a special election and was expected to surpass levels for the 2014 midterms. But torrential rain in the district on Tuesday could have a late impact on the race, especially if it snarls traffic in the region for people who were trying to make it to the polls before they closed.

As the Atlanta Journal-Constitution noted, with early voting numbers stronger for Democrats, the weather could end up hurting Handel:

“Ossoff’s campaign has long held that it has the edge in voter enthusiasm — a more committed base of voters who will flock to the polls regardless to support him. Handel’s supporters points to a core of backers who have followed her through thick-and-thin as well.

“Still, for Handel’s campaign, this could be a problem. She’s expected to trail Ossoff in the early voting numbers, and hopes for a solid election day turnout to notch a win. But the downpours could dampen voter participation in GOP bastions as well.”

Two precincts in DeKalb County, a key area where Ossoff needs big numbers, were also being held open until 7:30 p.m. ET after a mix-up this morning with checking-in voters.

While Price routinely cruised to re-election in the 6th District, which encompasses many affluent, well-educated suburbs just north of Atlanta, this certainly wasn’t Trump Country last November. The president only narrowly carried the district by just over 1 point; in 2012, GOP nominee Mitt Romney won it by 23 points.

As anger with Trump has risen across the country, Ossoff — a 30-year-old documentary filmmaker and former congressional staffer — became a somewhat unlikely vehicle for that resistance. He raised $23 million for his campaign, but most of that came from outside of Georgia from liberal enclaves like New York and California. Volunteers from around the country flocked to help him on the ground, too.

“It’s bigger than the 6th,” Holly Simmel, a volunteer for the Ossoff campaign, told WABE’s Johnny Kaufman. “They need to get used to the idea of no safe seats, because people are fed up. People are fed up everywhere.”

That outside help has been one of the focal points of attacks by Handel, a former secretary of state who was the Fulton County Commission chairwoman, the most populous area of the district. She’s emphasized her experience and decades of public service, tying Ossoff to national Democrats and pointing out that he doesn’t even live in the district. Ossoff grew up in the district but now lives just outside the border near Emory University, while his fiancee finishes medical school.

Ossoff has harnessed the anger against Trump to fuel his rise, but he also hadn’t made it the focal point of his campaign. While some of his ads early on ahead of the April all-party primary — where he got 48 percent of the vote in an 18-candidate field — talked about taking on the president, some of his recent spots have focused on cutting government waste and working to attract more tech jobs to the area. Those aren’t typically the top Democratic talking points, and often he hasn’t even mentioned his party ID. Yet his centrist campaign did appear to be able to unite the often-warring factions of the party — the more progressive wing with the more centrist aspects — and if he’s able to pull off the upset, that could be a model for other Democrats across the country.

Handel, meanwhile, hasn’t fully embraced Trump, but she hasn’t completely distanced herself from him either. The president held a fundraiser for her early on, but since other surrogates like Speaker Paul Ryan and Vice President Pence have stumped for her. She’s rarely mentioned Trump on the trail, instead pointing to local issues. However, polling shows his approval rating is underwater in the district, as is the GOP’s health care plan, the American Health Care Act.

The argument made by even Trump allies, such as Agriculture Secretary Sonny Perdue, the state’s former governor, over the weekend is that even if you don’t like Trump, don’t hold that against Handel.

“Some Republicans may even be turned off by our president,” Perdue acknowledged at a rally Saturday.

And, he seemed to admit, a loss could be damaging for the Trump administration’s agenda: “This is a harbinger of national politics. And the world is looking; the nation is looking.”

The Georgia race isn’t the only special election happening Tuesday, though. While the Peach State contest has gotten the vast majority of national attention and money, voters in South Carolina’s 5th District are also picking who will succeed Trump’s Office of Management and Budget Director Mick Mulvaney. The Palmetto State district hasn’t seen the erosion of support for Trump that Georgia’s 6th did last November though, and Republican state Rep. Ralph Norman is expected to beat Democrat Archie Parnell, a former tax attorney and financial adviser.