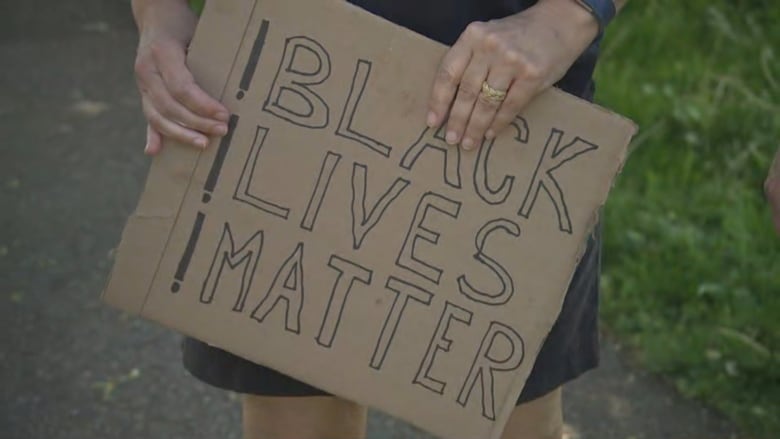 Deb Kohler, an American living in Hamilton, had never been to a political march before Sunday, when she stood beside strangers in Fort Erie, Ont., all gathered to remember the 10 people killed and the three people wounded when a white gunman opened fire at a Tops Friendly Market in Buffalo on May 14.

Kohler, a dual citizen, said that one of the emotions she feels, as an American citizen, is embarrassment.

She and her husband came to the march, she said, because “We just want to do what we can do to make people more aware and try to make changes and make their governments make changes.”

Authorities said the white man accused of the killings chose the grocery store because it’s in a predominantly Black neighbourhood.

During the march, participants held signs in support of Black Lives Matter and chanted “pray for peace, Buffalo strong.”

Marrika Sanders, who organized the event, said she was hoping Fort Erie neighbours would come out and realize “even though it’s not us, we are very much a part of Buffalo.”

“We are standing with you and praying for you.”

Sanders said the murder of George Floyd made her take action. Floyd was killed by Minneapolis police officer Derek Chauvin who pressed his knee into Floyd’s neck for nine and a half minutes as the 46-year-old Black man was handcuffed and facedown on the street on May 25, 2020.

Sanders said she wanted to raise awareness around issues of racism in Fort Erie, in part, because of the region’s history.

“Fort Erie was a place of refuge for slaves. It was called the Underground Railroad. It’s called the Freedom Trail now. This is where they got freedom. So, I thought it was appropriate.”

She said “I had a responsibility to keep my heart full of compassion and not become desensitized to what happened.”

On Monday night, Hamilton’s Afro-Canadian Caribbean Association (ACCA) and the Hamilton Centre for Civic Inclusion (HCCI) are inviting community members to a vigil in “honour and remembrance of the victims of the Buffalo massacre and Black survivors of white supremacist violence.”

The vigil will take place at the Hamilton City Hall forecourt at 71 Main Street from 8:30 p.m.

“We want to create space for the community to mourn the loss of members of the Black community who have had their lives taken from them at the hands of white supremacy,” said Hamilton’s ACCA Program Manager Talibah Howard in a news release.

Howard said they also want to support and show solidarity with “families, friends, and Black communities grieving the victims of racially motivated massacre.”

In the news release, the two organizations said all are welcome and encouraged people to bring their own candle for the silent vigil, which will be followed by speakers and music.