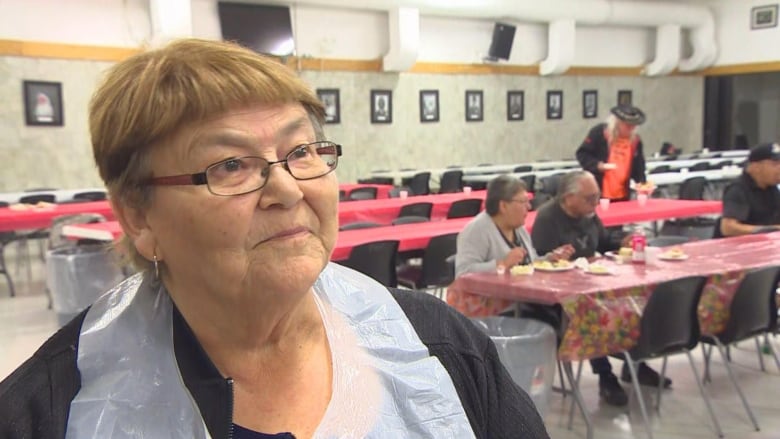 As many as 400 people gathered in Peguis First Nation on Sunday to enjoy a Thanksgiving meal together, taking stock of the things they’re grateful for after a very difficult year.

More than five months after 2,100 community members were evacuated from the First Nation in Manitoba’s Interlake area due to severe flooding, more than people 800 are still out of their homes, said Chief Glenn Hudson.

“It’s really great to all be together now,” band councillor Glenis Sutherland said.

“With the COVID and the flood and we still have many evacuees out in the city and different places, so it’s really nice to see everyone out here today and coming out to enjoy a home-cooked meal.”

She said a number of women in the community came together to cook for their fellow members, offering a free meal and a chance to catch up with friends.

Peguis member Cyndi Prince attended the meal and says the flooding was challenging for so many in her family.

“It tore a lot of people apart, and it still does. It’s very sad, but it’s awesome to have community come together and be together and talk with one another again,” she said.

Hudson says those 800 members who are still in hotels will also get Thanksgiving meals, but leadership wanted to do something special for those who are back at home.

“People have been through a lot of trauma with the flooding and obviously with the pandemic, there wasn’t many gatherings. So this allows them to feel more comfortable in a community setting,” he said.

On May 1, local officials issued a mandatory evacuation order, as the river washed out roads and breached dikes.

Some community members stayed behind to operate tiger dams, sandbag and do whatever they could to protect people’s homes.

Since then, Hudson says a lot of the cleanup work has taken place, but the biggest project has yet to be completed.

The chief says he’s still waiting for the provincial and federal governments to sit down and work out a plan for preventing future floods from happening.

“The important thing is to upgrade so we don’t have our community come to a standstill during flooding and that’s what we’re waiting to carry out,” Hudson said.

“It hasn’t been the greatest, I’ll say, the support … Today we’re we’re waiting on a [memorandum of understanding] to sign with the federal government and putting together working groups with the province, but that still has yet to happen.”

CBC News has requested comment from the provincial and federal governments, but didn’t immediately receive a response.

All other communities in the Red River Valley — including smaller centres like Morris, Emerson, St. Adolphe and Roseau River First Nation — are protected by ring dikes built high enough to keep floodwaters out.

“We want to do the same with our community our First Nation here and that’s something we’re working toward right now,” Hudson said