Paul George committed to playing for Indiana Pacers in 2017-18 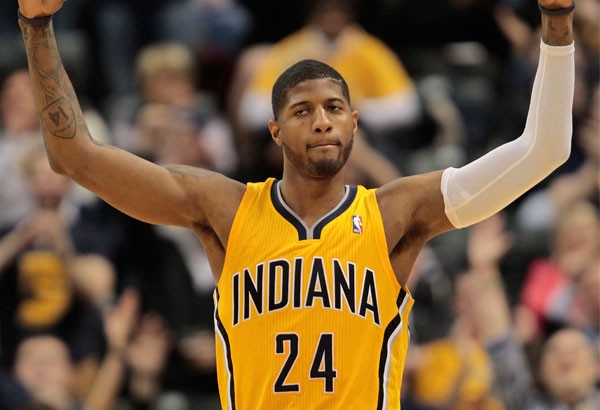 INDIANAPOLIS —   Paul George is committed to playing for the Indiana Pacers next season.

After that, it’s anybody’s guess.

The four-time All-Star forward provided clarity on his short-term plan Thursday before playing in a charity softball game just a short walk away from the only NBA arena he’s called home.

“I am a Pacer. I am under contract and I intend to play,” he said while sitting in the first base dugout.

George’s message may satisfy Pacers fans temporarily, though the much larger question still looms: Will he continue to suit up in Indiana beyond 2017-18?

If he doesn’t sign the max contract former president of basketball operations Larry Bird has been promising before July 2018, George could become one of the most coveted free agents on the market next summer.

He’s averaged 18.1 points and 6.3 rebounds over seven NBA seasons and is considered one of the best two-way players in the league.

The last two seasons have been the best of his career. Since returning for the final six games of the 2014-15 season, after gruesomely breaking his left leg, George has taken his game to new heights. He averaged 23.1 points and 7.0 rebounds in 2015-16.

Last season, he scored 23.7 points and grabbed 6.6 rebounds, not quite enough to earn a spot on the three all-NBA teams and perhaps costing him an additional $75 million from the Pacers.

All of those factors, and George’s occasional dissatisfaction with what’s gone on inside the organization, has led to speculation that the 27-year-old star could sign with his hometown team and lead the Los Angeles Lakers to another title.

Over the past four months, George has seemingly heard it all.

At the February trade deadline, there was speculation that he could be headed to Boston or Atlanta. This summer, rumors have surfaced with all sorts of possibilities: Indiana dealing George to Cleveland for Kevin Love, trading George to the Boston Celtics for the top pick in next week’s draft, even George and LeBron James pairing up with the Lakers after next season.

George doesn’t buy any of them.

“They’re all crazy,” he said. “But all are to be expected. I’ve been dealing with this since last season, but I’m just living in the moment.”

But Indiana fans and Pacers executives are still searching for answers about George’s long-term plan.

Kevin Pritchard, Bird’s successor as the team’s top decision-maker, and coach Nate McMillan need to know how to proceed during this crucial summer. So far, George hasn’t said much publicly.

He has, however, met with Pritchard and McMillan multiple times. George said he has reiterated his desire to lead the Pacers to an NBA title and provided insight on what he believes the Pacers need to do it.

Indiana struggled after the All-Star break last season before clinching the No. 7 seed in the final week of the regular season. Cleveland then eliminated the Pacers with a first-round sweep – four wins by a combined total of 16 points – on its way to a third straight Eastern Conference crown.

George believes making the right moves in next week’s draft and in the free-agent market could allow the Pacers to close the gap and perhaps even dethrone James’ team.

“In ways, I feel like we are close,” he said. “It’s hard not to believe that because we did the best against Cleveland of anyone and we could have won that series. At the same time, we need some more talent, we need better players.”