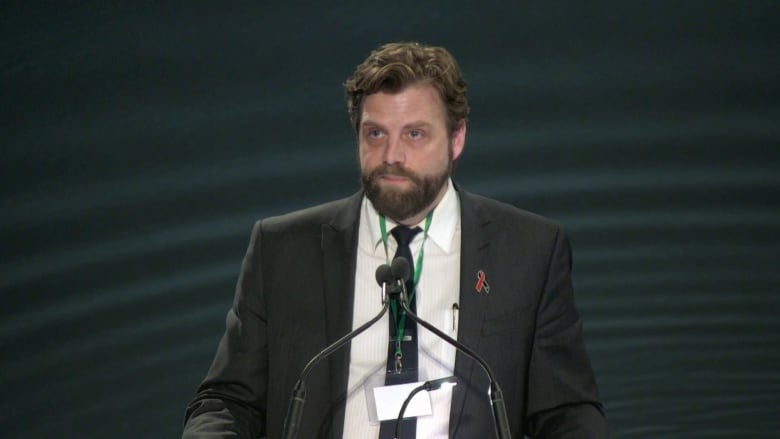 The partner of the gunman who killed 22 people in the Nova Scotia mass shooting will testify in person for the first time Friday morning in Halifax.

The Mass Casualty Commission leading a public inquiry into the 2020 rampage has said Lisa Banfield, Gabriel Wortman’s long-time partner, will only be asked direct questions by commission counsel.

“She’s very apprehensive, intimidated, frightened … there’s going to be a lot of revisiting of the trauma from the past. But she chose to come here in person. She was given the opportunity to testify by video link, and she chose not to,” Banfield’s lawyer James Lockyer said Thursday.

“She’s showing, you know, a lot of courage there in my view, and she’s going to do her best.”

The gunman began his rampage on April 18, 2020, after attacking Banfield during a celebration of their 19th anniversary. The gunman’s long history of violence, emotional abuse and other controlling behaviour toward Banfield was outlined in a foundational document released earlier this week.

As of Friday, Banfield has completed four interviews with police since the massacre, a video walk-through of her experience on April 18 and 19 in Portapique, N.S., and five recent interviews with the commission itself.

Soon after the video walk-through in October 2020, the RCMP charged Banfield with supplying ammunition to the gunman and she stopped cooperating with police. Banfield also, under her lawyer’s advice, initially refused to speak at the inquiry. That stance changed when her charge was referred to restorative justice in March.

According to a commission release, the decision to not allow questions from other participant lawyers is based on the volume of information Banfield has already provided, and her position as a “survivor of the perpetrator’s violence.”

Gillian Hnatiw, commission counsel, also said earlier this week that while there may be “follow-up questions” put to Banfield on Friday about the shootings, their team will not be asking her to retell that story.

Michael Scott of Patterson Law, the firm representing the families of most victims, said they were “shocked” to hear that.

Scott said their clients already had significant concerns with the commission blocking direct cross-examination. He is not planning to submit any written questions for the commission to consider.

Scott said there is “absolutely no point” in having Banfield give sworn testimony in person under the conditions the commission has laid out.

“We can be forgiven for concluding that Ms. Banfield has been called forward for no other reason than … it can be said that she was called,” Scott said Thursday.

He added that the commission’s trauma-informed mandate would have been better served by having Banfield testify once in person, and not sit through multiple lengthy interviews behind closed doors.

If this process had been done the “proper way” and questions allowed from various lawyers, Scott said Banfield would have been allowed the opportunity to speak her piece. But as it stands, Scott said there will still be major questions around Banfield after she testifies Friday, and “speculation about what actually happened.”

When asked what else the commission is hoping to learn from Banfield, one of their lawyers Emily Hill told reporters Thursday that there are multiple issues, including the history of the gunman’s abuse in their relationship. Hill also said they do have questions for her as a witness to how the events of April 18 unfolded.

Banfield has told police how the gunman assaulted her before throwing her into the mock RCMP car in his Portapique garage. She said she escaped through an opening in the car’s divider, and hid in the woods overnight.

Lockyer said he’s glad that the commission will not allow questions from participant lawyers which may be driven by a “conspiracy theory” that Banfield actually didn’t spend the night outside in the woods.

This type of question “takes us to south of the border,” Lockyer said Thursday.

“You know, these shootings happen south of the border and the next thing we hear from the Alex Joneses of this world is that the shooting never actually happened, it’s completely phony and was made up,” Lockyer said.

“We don’t need that kind of nonsense in Canada or in Nova Scotia.”

Lockyer said Banfield is aware victims’ families will be in the room Friday, and that’s one of the reasons she wants to come in person. Banfield never knew the massacre was coming, Lockyer said, and every day thinks about what would have happened if she hadn’t fled on April 18.

“She’s going to think about that every day for the rest of her life. That’s a difficult thing to carry, a very heavy burden to carry,” Lockyer said.

“She just hopes that … she’s going to be to tell them, as best she can, that she just wishes it never happened.”

Although Patterson Law filed a motion asking for detailed reasons on the commission’s approach, the commission released a decision dismissing this motion Thursday.

The commissioners said they have explained fully why Banfield is only being questioned by their own counsel, who are tasked to find answers in the public interest, and “not in the adversarial, trial-like model” on which the motion was based.

The commission also dismissed Patterson’s request to give an oral submission about Banfield’s testimony Friday.

This is not the first time the issue of lack of direct questioning has been raised by victims’ families and their lawyers. In May, the commissioners decided that only their lawyers would question RCMP Staff Sgt. Brian Rehill and Sgt. Andy O’Brien in pre-taped interviews. Rehill was in charge of the police response during the first hours after 911 calls began to come in. O’Brien helped communicate with officers at the crime scene early in the crisis.

This drew a temporary boycott of the inquiry by many victims’ families, who did not show up during the Mounties’ testimonies and instructed their lawyers to do the same.