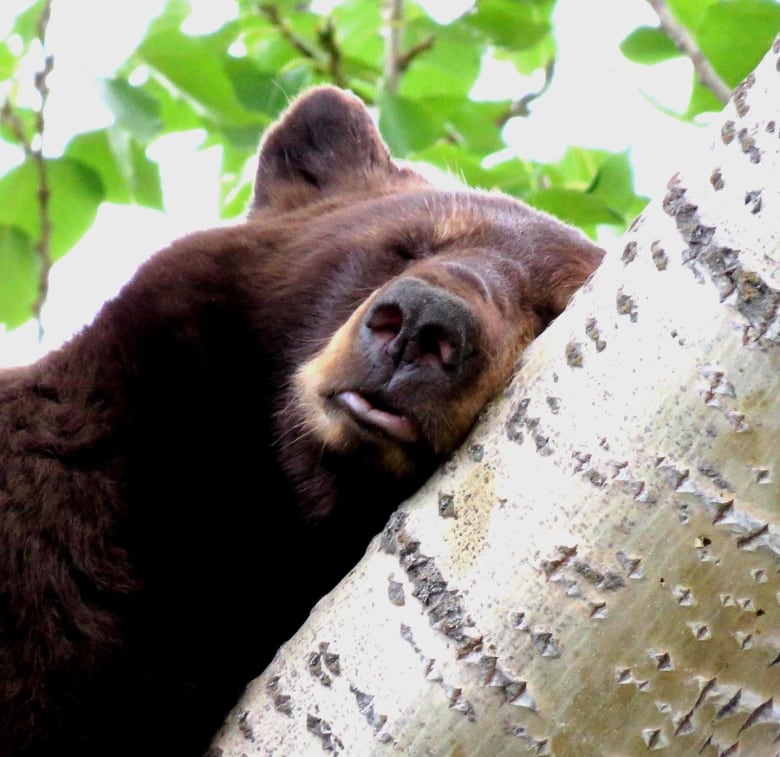 Black bears, undeterred by hazing, continue to fatten themselves on backyard fruit trees in Jasper, Alta., leading to a renewed warning from Parks Canada.

From apples to chokecherries, the town’s bumper crop of non-native backyard fruit is proving irresistible for the animals as they prepare for winter hibernation following a poor berry season in the backcountry.

Residents of the Rocky Mountain town are being reminded to remove any fruit from their properties to ensure bears aren’t drawn to local backyards, parks and green spaces.

“The continuous presence of bears in the Jasper townsite, often in residential yards just metres from people, is an unacceptable safety risk for visitors and residents,” reads a warning issued by Parks Canada this week.

“Bears living in constant proximity to people and residences have an increased likelihood of gaining access to human food or garbage, and of accidental aggressive physical encounters.”

Park staff have been called to respond to a string of close encounters in recent weeks.

A family of bears caught repeatedly feasting in backyards were trapped and relocated on Sept 9. They were driven out of town in the hopes they will find wilder fare.

The mother and two cubs were released into a remote area of the park along the Icefields Parkway and were spotted munching on native buffalo berries soon after, Parks Canada said.  At least seven other black bears have been drawn into town.

Parks canada said wildlife conflict specialists have been hazing the bears with noisemakers and non-lethal ammunition, such as paintballs and chalkballs, but making the bears wary is proving difficult.

Once they’ve sampled backyard fruit, they will likely stick around for a second helping.

“Bears in the townsite are extremely reluctant to leave, as fruit trees provide a high food reward for bears preparing to hibernate.

“When they are moved only a short distance from town, they tend to come back almost immediately.”

While some animals have been captured, trapping is risk for the animals, Parks Canada said. It’s stressful, particularly for cubs, and bears relocated from Jasper the town then face new risks associated with being released into unfamiliar habitat possibly occupied already by other bears.

If these food sources aren’t removed, Jasper’s bear problem is expected to get worse, Parks Canada cautioned. Mother bears will teach their young that the town offers a reliable food source.

The latest warning from Parks Canada is part of ongoing efforts to root out the town’s problematic bumper crop of non-native berries.

Parks Canada is asking that these trees be removed from public and private property. Last month the Municipality of Jasper announced that it had placed more than 20 non-native fruit trees in local parks and greenspaces on the proverbial chopping block after they had been deemed problematic. Parks Canada is also offering free assistance to residents with tree removal.

‘They march in broad daylight’

Joe Urie, a Jasper resident and co-owner of a local tour company, says bears have become increasingly common in town over the years, but were particularly brazen this season. He’s spotted them up in trees, roaming yards and even napping on a neighour’s roof.

He said while some of the problem bears were sneaky, the mother bears were fearless in their search for food.

“These moms, you know, their need to feed was so much greater because they’re also feeding these cubs, and so they march in broad daylight.

“And all the hazing didn’t amount to anything anymore. They understood it was just a bit of a sting and that was it.”

Urie is encouraging his neighours to cut their fruit trees down and suggests their removal should be mandated by bylaw.

“This problem is going to continue to get worse and there is only one solution. And that is for locals to get on the same page as Parks Canada.”