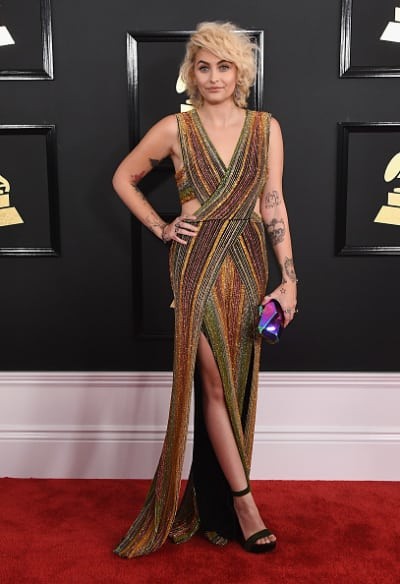 Paris Jackson is all about being one with nature.

The “It” girl took to Instagram to show of her spiritual side, which consisted of posting several images, some of them topless, while on a spiritual retreat or sorts on Friday.

In one photo, Michael Jackson‘s only daughter appears topless kneeling in front of a statue of Buddha. Other images show scenes the spiritual sanctuary that the teen appears to be visiting.

In another image, the 19-year-old posted shirtless photo showing her from the back while on her knees in a tipi. A third image shows the bare model on the branch of a tree. A third Instagram is captioned, “Bark to skin.” Other than that caption, the posts from the retreat, which show that the pop royalty is in the middle of a wooded area, are caption-less and all of the images have the comments turned off.

But the retreat wasn’t only filled with topless times, a fully clothed Jackson also had a little fun with a male pal while in the serene location.

Wearing silken pajama pants and a peach tank, last night Jackson posted a video of the two reenacting the famous library scene from Beauty and the Beast as Angela Lansbury‘s “Tale as Old As Time” plays in the background.

The starlet captioned the video, “Disney pajama party with the greatest roommates of all time.”

This isn’t the first time that Jackson’s hopped on social media and dared to bare. While many may have opinions about her candid snaps, Jackson definitely has a response about going naked.

In May, the teen posted a topless image of herself and addressed the controversy.

“I’ll say it again for those questioning what I stand for and how I express myself. Nudity started as a movement for ‘going back to nature’, ‘expressing freedom’, ‘being healthier’ and was even called a philosophy. Being naked is part of what makes us human,” the Vogue Australia cover girl shared with her followers. “For me it helps me feel more connected to Mama Gaia. I’m usually naked when I garden.”

She continued, “It’s actually a beautiful thing and you don’t have to make it sexual the way many Hollywood stars (and the media) do. Not only is your body a temple and should be worshipped as so, but also part of feminism is being able to express yourself in your own way, whether it’s being conservative and wearing lots of clothes or showing yourself.”

Miss Jackson also took a moment to express the importance about appreciating your body no matter what size or shape you are.

“The human body is a beautiful thing and no matter what ‘flaws’ you have, whether it be scars, or extra weight, stretch marks, freckles, whatever, it is beautiful and you should express yourself however you feel comfortable,” she explained.

For those who may be upset at the revealing shots, the cover girl has previously said that she completely understands and even encouraged her followers to click the “unfollow” button.