Paris climate deal: Trump pulls US out of 2015 accord 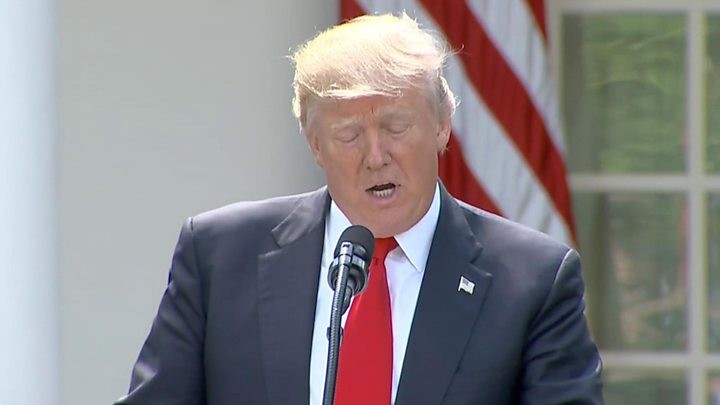 President Donald Trump has announced that the US is withdrawing from the 2015 Paris climate agreement.

He said moves to negotiate a new “fair” deal that would not disadvantage US businesses and workers would begin.

Mr Trump said during last year’s presidential election campaign that he would take the step to help his country’s oil and coal industries.

Opponents say withdrawing from the accord is an abdication of US leadership on a key global challenge.

The Paris agreement commits the US and 187 other countries to keeping rising global temperatures “well below” 2C above pre-industrial levels and “endeavour to limit” them even more, to 1.5C. Only Syria and Nicaragua did not sign up to the deal.

What did Trump say?

Speaking in the White House Rose Garden, Mr Trump characterised the Paris agreement as a deal that aimed to hobble, disadvantage and impoverish the US.

He claimed the agreement would cost the US $3tn in lost GDP and 6.5 million jobs – while rival economies like China and India were treated more favourably.

“In order to fulfil my solemn duty to protect America and its citizens, the United States will withdraw from the Paris climate accord… but begin negotiations to re-enter either the Paris accord or a really entirely new transaction on terms that are fair to the United States,” he said.

“We don’t want other leaders and other countries laughing at us any more – and they won’t be,” he said.

“I was elected to represent the citizens of Pittsburgh, not Paris. I promised I would exit or re-negotiate any deal which fails to serve America’s interests. Many trade deals will soon be under re-negotiation.”

The BBC’s Rajini Vaidyanathan in Washington says the move will be welcomed by many Trump supporters, as for them this is less about science – and more about sending a signal to so-called global elites.

The US contributes about 15% of global emissions of carbon, but it is also a significant source of finance and technology for developing countries in their efforts to fight rising temperatures.

Mr Trump did not give a timescale for US withdrawal, but White House sources had earlier suggested it could take up to four years.

Former US President Barack Obama, who agreed to the Paris deal, immediately criticised the move, accusing the Trump administration of “rejecting the future”.

Republican congressional leaders and the US coal industry backed the move, with Senate Majority Leader Mitch McConnell supporting Mr Trump “for dealing yet another significant blow to the Obama administration’s assault on domestic energy production and jobs”.

Senate Democratic leader Chuck Schumer called the decision “one of the worst policy moves made in the 21st Century because of the huge damage to our economy, our environment and our geopolitical standing”.

The leaders of France, Germany and Italy issued a joint statement rejecting a renegotiation of the agreement.

“We deem the momentum generated in Paris in December 2015 irreversible and we firmly believe that the Paris agreement cannot be renegotiated, since it is a vital instrument for our planet, societies and economies,” it said.

This was echoed by UK Prime Minister Theresa May, who expressed her disappointment and told Mr Trump in a phone call that the deal protects the “prosperity and security of future generations”.

A United Nations spokeswoman said it was a “major disappointment for global efforts to reduce greenhouse gas emissions and promote global security”.

Small island nations whose existence is threatened by rising sea levels were critical of the move. The President of the Marshall Islands, Hilda Heine, said it was “highly concerning for those of us that live on the frontline of climate change”.

Tech entrepreneur Elon Musk confirmed that he was leaving his role as an adviser to the Trump administration in protest.

“Am departing presidential councils. Climate change is real. Leaving Paris is not good for America or the world,” he tweeted.

President Trump’s statement is a very clear repudiation of the Paris agreement and international efforts to fund climate mitigation and adaptation in poorer countries.

In many ways it is far worse than many had expected. He sees it as a clear job killer, as an economy strangler and a desperately unfair stitch-up by other countries wanting to take economic advantage of the US.

He spoke of being open to re-negotiating the deal or trying to build a new agreement – but the idea of “re-negotiation” is an unlikely scenario.

The scale of his opposition, seeing the deal as “a massive redistribution of US wealth to other countries” is a clear indication that he has fully bought into an economic nationalist and climate denier perspective.

The question of unfairness cropped up again and again, how the world’s worst polluters, China and India, had “no meaningful obligations” placed on them by the deal.

The overall tone and content of his speech clearly plays to his base but is also a clear disavowal of multilateralism, especially on climate change, and will definitely push other countries more closely together on this issue.

Climate change, or global warming, refers to the damaging effect of gases, or emissions, released from industry and agriculture on the atmosphere.

The Paris accord is meant to limit the global rise in temperature attributed to emissions.