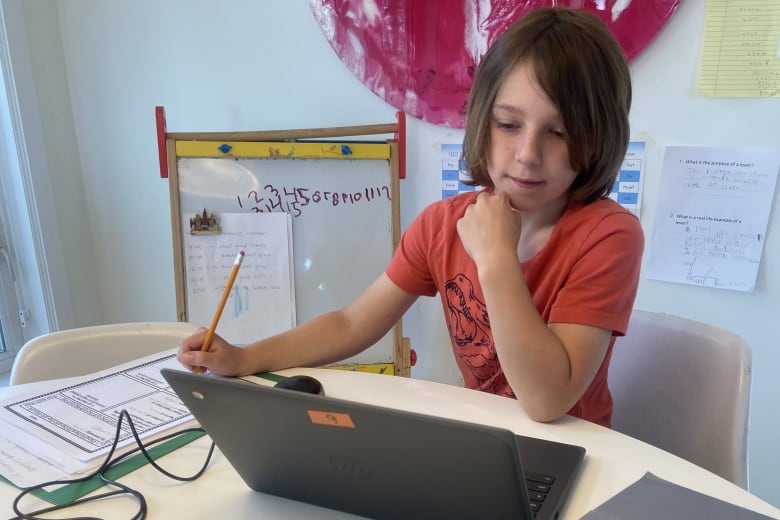 Jon Bahen finds the more people in his work-from-home Zoom meetings, the less effective they can be. Imagine then how difficult it is for a child struggling with school to vie for attention in an online class alongside nearly 30 others, said the Barrie, Ont., parent.

When they received November’s report card, Bahen and his wife Rina D’Angelo were shocked to learn that their shy seven-year-old son Connor is a full year behind in his reading and writing. The couple also juggles a daughter in junior kindergarten and an eight-month-old baby, but they regularly sit alongside Connor during his once-again online classes. They read with their second-grader every day and are now hiring a tutor to help him catch up.

“His reading and writing have definitely suffered with just the inconsistent education of going back and forth and from in-person to online,” said D’Angelo. She’s noticed it affects everything from solving math problems to being able to independently complete assignments.

“It’s just a snowball effect that will affect everything else he needs to learn,” she said. “Everyone is doing their best, yet kids are falling behind.”

School during the pandemic has looked different depending on region, but many students have experienced disorienting shifts between virtual and in-person learning due to school closures. For worried parents, education researchers and developmental experts, alarm bells are ringing about how all the disruption is affecting this generation of students, particularly Canada’s youngest learners.

An ongoing U.K. project is examining four- and five-year-olds who started school last September. In its initial findings, 76 per cent of the participating schools reported they have needed more support than the kindergartners who started in previous years, primarily with communication and language development, personal, social and emotional development, and literacy.

WATCH | Masks can be tough for kids. Here’s how adults can help:

Wearing masks during the pandemic has created a unique set of challenges for kids including recognizing other people, reading emotions and learning to talk. But researchers say there are simple things adults can do to help them out. 5:59

Here in Canada, education researcher George Georgiou has already detected reading deficits among primary-aged students in Alberta. After conducting testing in schools around Edmonton last fall, he discovered that students in Grades 1 through 3 were reading at about eight to 12 months below their grade levels

Georgiou, a professor of education at the University of Alberta, is now working with the provincial education ministry to expand his voluntary testing program provincewide to quickly identify reading struggles and provide schools with resources and intensive strategies to bring affected students up to speed.

“We know that about 75 per cent of the children who do not overcome their reading difficulties by the end of Grade 3, they continue to struggle throughout their school life,” said Georgiou, director of the university’s J.P. Das Centre on Developmental and Learning Disabilities.

“It’s in our best interest to support these kids, identify them as soon as possible and provide them with intensive intervention so that they overcome their early reading difficulties.”

School divisions that directly intervened with struggling readers last fall and winter helped about 80 per cent of students catch up.

“If we scale this up across Alberta… we are hopeful that this will help all the kids who are in need,” he said

One major wrinkle is online schooling, which Alberta said this week it’s returning to for at least two weeks province-wide. In his recent work, Georgiou found that kids learning online have been more affected by reading difficulties than those learning in person, with students who already struggled before COVID-19 at the greatest disadvantage.

While online intervention programs can help struggling readers improve somewhat, Georgiou said that studies show they are not as effective as face-to-face instruction.

Some skills ‘harder to pick up later’

The whole system of monitoring development of young children has been affected by the pandemic, says Dr. Ripudaman Minhas, a developmental pediatrician at St. Michael’s Hospital and assistant professor in the department of pediatrics at the University of Toronto.

WATCH | How pandemic stress can affect home as a safe learning space:

Pandemic stress can be passed on to children and teens, affecting their development and ability to pick up skills, says developmental pediatrician Ripudaman Minhas. 1:33

“This has impacted across the whole pathway for families, from identification of a child who may be struggling… all the way to difficulties with getting referred in,” he said.

“Our capacities within clinics have slowed down as well, which has made our wait list swell up.”

This is a concern because children’s brains are primed to learn many skills at specific, critical periods of development, Minhas said. “We know that when the acquisition of those skills — and the experiences that add to that — are delayed, that they’re harder to pick up later.”

The resilience of children and how they’ve adapted to pandemic measures at school makes him hopeful they will also be able to adapt quickly to post-pandemic life. Still he said, there will be lingering impacts, especially for those whose families have had more dire experiences this past year.

“There is a worry about this wave that’s going to come through the system that was already strained as it was,” Minhas said.

Some supports in place to help students recover

Re-engaging and supporting students, including their mental health, as well as paying attention to catching the youngest students up on reading and math are on the radar for several education ministries that announced budget plans for the next school year.

Parent Rina D’Angelo said getting students back into a physical classroom is vital.

“Get teachers vaccinated, implement smaller class sizes or [buy] PPE — whatever needs to be done to ensure that these children’s education isn’t disrupted,” she said.

“Teachers can’t see which children are struggling if they’re not in the same room.”