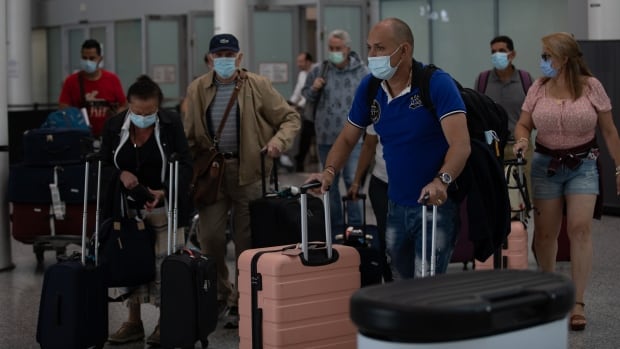 The federal government is set to announce Tuesday an end to the COVID-19 vaccine mandates for domestic travel on planes and trains, as well as outbound international travel, CBC News has learned.

The government may reinstate the vaccine requirement if there’s a new variant of the virus, according to sources with direct knowledge of the decision who spoke with CBC News on condition they not be named.

The vaccine mandates for travel have been in effect since Oct. 30, 2021. As the mandate was phased in, travellers had a one-month grace period where they could instead provide proof of a negative COVID-19 test.

The government has been under pressure from the opposition parties, as well as industry organizations, to relax some public health measures in response to delays and long lineups at airports.

When the vaccine mandate came into effect for travel, Transport Minister Omar Alghabra said it was to keep travellers and employees in the industry safe.

But experts have questioned the effectiveness of vaccine mandates for travel with the emergence of the more infectious Omicron variant. Tam has said that effective protection against the variant requires a third, booster dose.

So far, the government’s definition of fully vaccinated remains two doses of an approved COVID-19 vaccine, or one dose of the Johnson & Johnson vaccine.

Last week, the federal government announced that it was suspending random COVID-19 testing at airports.