OPP officer killed near Brantford, Ont., while responding to a call, commissioner says 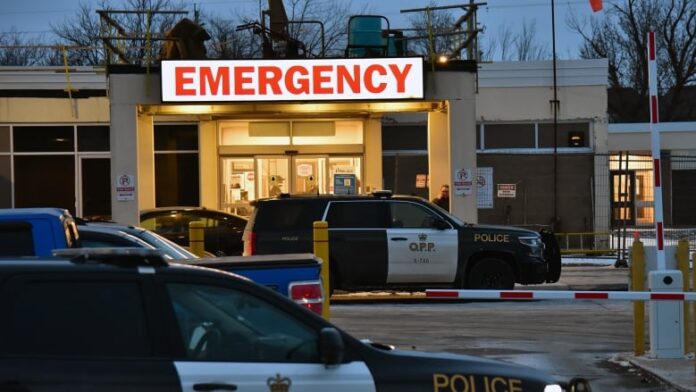 An Ontario Provincial Police (OPP) officer has died after he was shot in Haldimand County while responding to a call, police say.

“Our hearts are with his loved ones and all OPP members at this tragic time,” wrote Carrique on Twitter.

OPP Sgt. Ed Sanchuk says a male and a female are in custody in connection with the fatal shooting.

He says no other suspects are outstanding, though he did not say whether any charges have been laid.

According to Sanchuk, Pierzchala responded to a call of a vehicle in a ditch around 2:40 p.m. at Indian Line and Concession 14, roughly 40 kilometres away from Hamilton, near Hagersville, Ont. The area is also home to Mississaugas of the Credit First Nation (MCFN) and next to Six Nations of the Grand River.

Upon arrival, Sanchuk says Pierzchala was shot. He was transported to hospital with life-threatening injuries.

OPP say Pierzchala was 28-years-old and died during his first year as a provincial police officer.

“Greg was a phenomenal officer, great guy, great community member,” said Sanchuk. He noted his family is asking for privacy at this time.

“He’s going to be truly missed by everybody.”

A male and a female were seen leaving the scene, police say.

Around 5:45 p.m. OPP issued a shelter in place alert for residents in Six Nations of the Grand River, Hamilton and surrounding areas, warning them of two suspects, a man and a woman.

A name, photo and suspect description of the man were included with the alert, while the woman was unidentified. A description of a vehicle was also given.

As of around 7 p.m., the alert is no longer active.

‘I was very scared,’ resident recalls

Halley Hill, 28, is Mohawk, Turtle Clan from Six Nations and lives in the Hagersville area with her two children, aged six and four, about “a concession and a half” from where she believes police were searching for suspects, she said.

“I had a lot of anxiety. And I was just trying to do my best to stay calm for my children,” said Hill, adding she always felt the area was a relatively safe environment for her kids.

Now that the alert that called for residents to shelter in place is no longer active, Hill says she feels some relief but is still “a bit shaken up and nervous” knowing it was so close to home.

“I just feel very, very terrible for the officer who lost his life,” she said.

“I think people need to be kind to all surrounding communities. I know a lot of people have issues with police… In this instance, it’s not about that. You know, a police officer lost his life.”

As for the reports that say an Indigenous man was a suspect, Hill called for caution.

“And I just want people to keep in mind to be kind to also other Indigenous people because we know there’s going to be a lot of things said, unkind things, unpleasant things towards Indigenous [people] now that this has happened.”

Members of the local community shared their grief at Pierzchala’s death.

“Every day, our County’s first responders risk their lives for the safety of our community and a tragedy like today’s is one we hope never comes,” said Haldimand County Mayor Shelley Bentley in a statement.

“I know there’s nothing I can say to lessen this tragic loss, but to all who are grieving, know that the community grieves with you.”

Stacey Laforme, the Gimaa (Chief) of MCFN, says the community will be arranging for wellness supports for those impacted by the tragedy.

“We are relieved to hear that the people involved have been taken into custody,” said Laforme in a statement.

“Our thoughts and prayers are with the family and friends of the police officer who was shot and killed this afternoon.”

Mark Hill, elected chief of Six Nations of the Grand River, says he’s spoken to Laforme and has offered any services Mississaugas of the Credit First Nation might need at this time.

“I was heartbroken to hear of this tragic incident as a result of a senseless act of violence, and of a young life taken so soon in the line of duty,” Hill said in a statement.

“I am sending my sincere condolences, thoughts, and prayers to Officer Pierzchala’s loved ones and the entire OPP family for this immense loss.”

Ontario Premier Doug Ford said he was “horrified” by Pierzchala’s death, adding he’s thankful to the officers who arrested the suspects.

“Our first responders are true heroes. We share in the pain felt by .. family, friends and the entire police community as Ontario mourns this loss,” Ford wrote in a tweet.