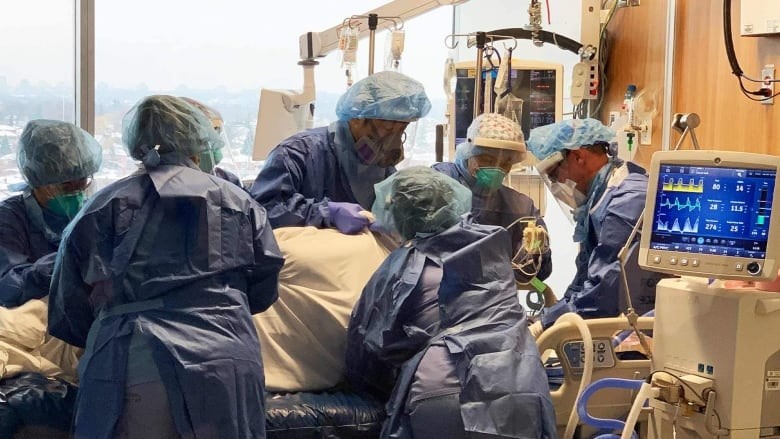 Ontario’s latest COVID-19 modelling will project the province’s intensive care units to be filled beyond capacity by early February, and will also show how a new, more contagious variant of the coronavirus risks accelerating the spread of infections, sources tell CBC News.

Premier Doug Ford has warned he is ready to impose further restrictions based on the modelling, but no announcement is planned before Tuesday, according to government sources.

Although the projections by Ontario’s scientific advisors were presented to cabinet on Friday, the information is not slated to be made public until Tuesday.

Multiple sources who have seen the modelling tell CBC News it includes:

“The modelling paints a very bleak picture both in terms of daily cases and the impact on hospitals,” a senior government official told CBC News on Sunday.

“We are in a desperate situation and when you see the modelling, you’ll fall off your chair,” Ford said Friday during a news conference filled with dire warnings of what Ontario faces from COVID-19.

“We are in a crisis, that’s how I can describe it, it is scary,” Ford said. “This is the most serious situation we’ve ever been in, ever, ever, since the beginning of this pandemic.”

Despite Ford’s statements, the new modelling does not show dramatically different trends from what Ontario’s COVID-19 science table previously warned would happen with the pandemic in January, according to two sources who saw the material.

Cabinet is due to meet Monday to decide what measures to impose, a government source tells CBC News.

“Everything is on the table,” Ford has said repeatedly in recent days.

Sources say options include the consideration of a curfew designed to prevent people gathering with others outside their own households, as well as further shutdowns of non-essential businesses and workplaces.

However, government officials say cabinet has not had more than a broad discussion about the possible measures and hasn’t decided which restrictions to impose.

“We don’t have a lot of tools left in the tool box,” the senior government official acknowledged.

On Dec. 21, the Ford government announced what it described as a province-wide lockdown to take effect on Boxing Day. The measures included restricting most shops other than grocery stores and pharmacies to curbside pickup only, and limiting restaurants and bars to takeout and delivery.

The mobility data will raise questions about the government’s decision not to impose tighter restrictions sooner, given how the growth in new cases began surging in late December.

In the two weeks leading up to Christmas, the province’s average daily number of new cases grew at a pace of less than 2 per cent per day.

But over the past two weeks, the pace has accelerated much more rapidly, increasing by about 3.4 per cent per day.

If the growth in new cases continues at that rate, Ontario is on track to average more than 6,000 cases per day before the end of January.

Modelling released in mid-December projected Ontario to have roughly 400 patients with COVID-19 in intensive care by this point in January if cases grew at a rate of three per cent daily. The ICUs hit that mark on Saturday, said a report from Critical Care Services Ontario, a provincial health agency.

According to sources who saw the new modelling, it projects nearly 800 coronavirus patients in ICU by early February if the daily growth in cases is at three per cent, and nearly 1,000 in intensive care if cases grow by five per cent daily.

Either scenario would pose a risk of Ontario’s hospitals having more ICU patients than they can currently handle.

Setting aside the effects of COVID-19, health officials say Ontario typically has a baseline of about 1,200 patients in intensive care at a time just because of everyday health emergencies, from heart attacks and strokes to car accidents or organ failure.

The province has the capacity for around 2,000 ICU patients in total, limited not just by the number of beds but also the availability of doctors, nurses and other health staff trained in intensive care.

Ford tweeted Sunday that Ontario’s health-care system “is on the brink of being overwhelmed.”

Friends, we are going to see some real turbulent waters over the next few months. Our healthcare system is on the brink of being overwhelmed and we must take every precaution to keep our most vulnerable safe. <br><br>Other people’s lives are in your hands. <a href=”https://t.co/HmFLDPY9P6″>pic.twitter.com/HmFLDPY9P6</a>

The information presented to cabinet about the potential effect of a coronavirus variant first reported in the U.K. is based on research by Queen’s University mathematician Troy Day.

The new variant spreads more easily and faster than the original version of the virus, according to a report from researchers at Imperial College London released on Dec. 31, but it is not believed to be more deadly.

Day’s research shows, based on evidence of how the virus is currently spreading in Britain, that Ontario could, by late February, see the overall number of new daily cases doubling in a stretch of just 10 to 15 days, twice as fast as the recent growth rate.

“That would be a really horrific situation,” Day said in an interview with CBC News.

The survey data shows that a “concerning” proportion of people are not following public health guidelines in their personal behaviour, said the government official, adding that the data likely underestimates the actual level of non-compliance.

CBC reported in October that the government planned to conduct such surveys of public health behaviours.