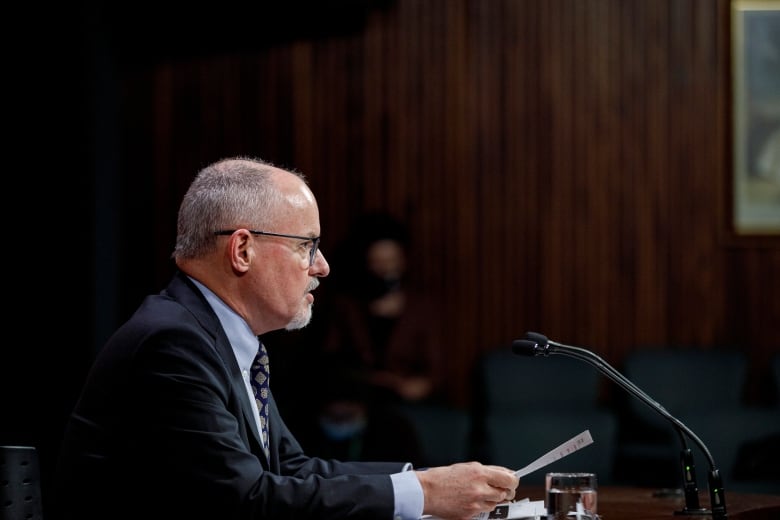 Premier Doug Ford describes Ontario’s current COVID-19 situation as “a little spike,” but there are plenty of signs that the pandemic’s sixth wave is on a trajectory to become far bigger than that.

By every available measure — hospitalizations, officially confirmed cases and the presence of the virus in sewage — Ontario’s latest wave of COVID-19 infections is showing exponential growth.

Estimates from the viral count in wastewater suggest about 100,000 people are now getting infected daily in Ontario, according to the COVID-19 Science Advisory Table. That is a faster infection rate than at any previous time in the pandemic.

All of this leaves no doubt that Ontario is in a sixth wave, even though the province’s Chief Medical Health Officer Dr. Kieran Moore has yet to declare it officially. Moore hasn’t held a news conference or done any media interviews in four weeks, despite repeated requests from a range of media outlets, including CBC News.

Still, plenty of unknowns remain about Ontario’s sixth wave: What kind of impact is it having? How much bigger will it get? What should the province do about it?

The Ford government’s approach to that last question right now is to stay the course after lifting most COVID-19 public measures last month.

“There’s no cause for panic,” Ontario Health Minister Christine Elliott said Wednesday when asked about the COVID-19 situation at an unrelated news conference. “This is something that we are sure we’re going to be able to get through.”

At the same news conference, Ford was asked if he’s downplaying the significance of the current wave for political reasons, with Ontario’s election campaign due to begin in four weeks.

“I’m not downplaying it,” Ford responded. “But let’s put this into perspective. We have still one of the lowest cases per capita of hospitalizations in the country.”

Ford and Elliott are repeatedly aiming to reassure Ontarians that hospital bed capacity, high vaccination rates and the availability of antiviral medication mean the province’s health system can cope with the current wave.

‘This pandemic is not over’

It’s a message that doesn’t sit well with those who believe “hospitals aren’t overrun” is a low bar for success, including Dr. Amit Arya, a palliative care physician who works in hospitals and long-term care homes in the Toronto area

“Simply just ignoring COVID-19 and pretending that it doesn’t exist and dropping all public health protections is the wrong message at this point in time,” Arya said in an interview.

“Many people, including even some of my own friends and family, are believing this message and sort of interpreting this to say that the pandemic is over,” Arya added.

Anthony Dale, the president of the Ontario Hospital Association, says Elliott’s call not to panic is appropriate, but adds a caveat.

“Panic doesn’t solve anything. But in saying, ‘Don’t panic,’ that also doesn’t mean ‘Look away. there’s absolutely nothing to see here, everything’s fine,'” Dale said in an interview. “Our number one message is that this pandemic is not over.”

The province reported 1,074 patients in hospital with COVID-19 on Wednesday, a jump of 36 per cent in a week. Looking beyond that current figure, what concerns many health experts is the number of patients to come, especially given the record high number of cases.

“There’s widespread COVID in the community and that makes it easier [for the virus] to find vulnerable individuals and at-risk populations, which means we will see more hospitalizations,” Bogoch said.

Throughout the pandemic, experts have tried to make it clear that hospitalization statistics are what’s called a “lagging indicator” of the COVID-19 case rate: the severity of the trend doesn’t become apparent until a couple of weeks after infections happen.

Some portion of the 100,000 people getting infected every day now will end up in hospital later this month, and some of those will die. Meanwhile, many hospitals are beginning to face staffing challenges as health-care workers call in sick because they or a family member has contracted COVID-19.

Doctors are questioning Ford’s insistence that the province can easily handle a surge in patients by adding more bed capacity.

“Health-care workers are getting COVID-19 at a rate in Ontario never seen this pandemic. We can’t staff any extra beds in the hospitals,” Dr. Lisa Salamon, an emergency physician in Scarborough, tweeted this week. She added that many of the cases involve health workers infected by their children, bringing the novel coronavirus home from school.

Dr. David Fisman, a physician and epidemiologist with the University of Toronto’s Dalla Lana School of Public Health, says the province is taking a “head-in-the-sand approach” to the current wave and “de facto encouraging people to spread disease” by doing so.

“It’s particularly concerning because these waves are hitting young kids in a manner out of all proportion to what’s happened earlier in the pandemic,” Fisman said in an email to CBC News.

The government’s decision to end mandatory mask rules in mid-March in most indoor locations, including schools, was accompanied by a shift in message. Moore, Ford and Elliot began describing masking as a personal choice for those at higher risk.

This consigns to the dustbin the idea that people should wear masks in public indoor settings to prevent spreading COVID-19 to others.

‘We should all be wearing masks’

Ford and Elliott have repeatedly said no to re-imposing the mask mandate, saying that Dr. Moore is not recommending it. By contrast, Quebec extended its mandatory masking rules this week until the end of April.

“We should all be going back to wearing masks,” said Dr. Mustafa Hirji, the medical officer of health for Niagara Region. “It’s definitely going to be much harder to bring the people back to masking once they have stopped.”

Given all this, how bad will the sixth wave get?

“I don’t think it’s a foregone conclusion that necessarily this wave is going to be less bad than the previous wave,” Hirji said. “It’s not a guaranteed outcome, and I don’t think we should be banking on that.”

Dr. Kashif Pirzada, an emergency room physician in Toronto, said he is hopeful that the protection from vaccines and the arrival of better weather will work in Ontario’s favour.

“Fingers crossed it’ll be okay,” Pirzada said in an interview.

“But overall, dropping precautions right when a wave is starting was a really bad move and it’s going to cost us all, unfortunately.”