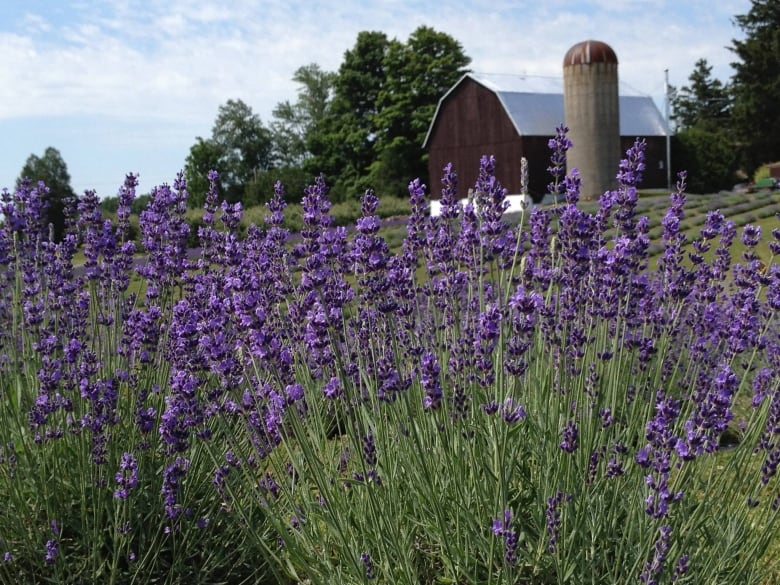 When Jenn Schooley works in the orchard of her family farm, surrounded by dwarf fruit trees and bright, fragrant fields of lavender — her mother’s “field of dreams” — she knows it’s where she belongs.

“You feel your generational roots when you’re out in the middle of the orchard working land that your great-grandfather worked,” she said.

“There’s just something that pulls you in, and that drive alone is enough to keep me going for a long time.”

After working for a children’s mental health agency for 20 years, Schooley is stepping into her new career and passion as a farmer at Apple Hill Lavender Farm in Ontario’s Norfolk County.

Her photos and videos on social media document her learnings — cultivating a field, figuring out the irrigation system, and dealing with broken machinery.

It’s a transition from office life into a world of “dirt, diesel, grease, and hydraulic oil.”

Her sister Melissa handles the business side. They’ll be the fourth generation in their family to lead the 115-year-old farm.

With their parents getting older, Jenn decided to get behind the wheel of the family tractor, sitting where her dad sat.

“COVID was one of those eye-openers, where it made me really see how important family was,” Jenn said. “That’s what matters in the end.”

Melissa, a potter by trade, had jumped on the opportunity for studio space in the farm’s barn in 2002. The sister said it would not have been “physically possible” for her to take care of the farm alone.

“It’s such a beautiful piece of land that you just want to stay here and nurture it,” she said. “To know that Jennifer was coming on board, it was such a tremendous sense of relief for me because it meant that we could move forward.”

It’s been a steep learning curve, Jenn said, but she loves a challenge. Knowing her sister is by her side, and her dad attached to her hip, she hopes to soak up as much knowledge as she can.

In one video, Jenn shows how to hook up an irrigation line to water an elderberry plant in the hot, dry weather.

She punches a hole through the line, and connects an emitter to a tube. The emitter gets inserted inside the line and the other end is driven into a slice of earth that peeks out from beneath the landscaping cloth.

A large staple keeps the line from shifting.

Part of that learning, the sisters say, is knowing the farm is an entity in itself — a resilient force that’s at the mercy of mother nature, an “unstoppable snowball” that’s barrelling down a mountain.

“The farm is going to go ahead whether you come along with it or not,” Melissa said.

Their father, who returned to his childhood home to run the farm in the late 1970s, was an apple grower with an uncanny gift for reading the orchard. He was also committed to exploring science and farming practices, and was one of the first Ontario farmers to grow dwarf fruit trees and run an integrated pest management program.

He met their mother — working as a ginseng and medicinal herb specialist for the Ministry of Agriculture and Food — in a master’s of science botany program. She daydreamed about planting lavender fields and running a boutique on the farm.

Switching hands to a new generation isn’t the easiest, the sisters said, especially when you’ve been responsible for life on the land for 45 years.

One “bone of contention,” they said, was painting the barn purple.

Though it led to an animated discussion with their dad —and a few grumbles — white trimmings now pop from its stunning purple walls.

“Everybody who comes here, their jaws drop and that is one of the first things they say: ‘oh my god this place is beautiful,” Melissa laughed.

The most amazing thing, Melissa said, is the farm’s constant evolution. She’ll dig out photographs showing trees that no longer stand and a scenery that looks unlike the one she looks out at now. It gives her “goosebumps.”

“The only thing we’re guaranteed in this life is change.”

They’re diversifying the crops, adding elderberries and herbs — chamomile, arnica, and calendula. The farm is currently open to the public, allowing people to wander the fields with “no barriers” and pack a lunch for a picnic.

The sisters say they want to educate people about the plants and wildlife on the farm by answering questions informally on the land about plants or birds. The farm also holds workshops, such as ones on lavender distilling.

“We have more ideas than we know what to do with,” Melissa said.