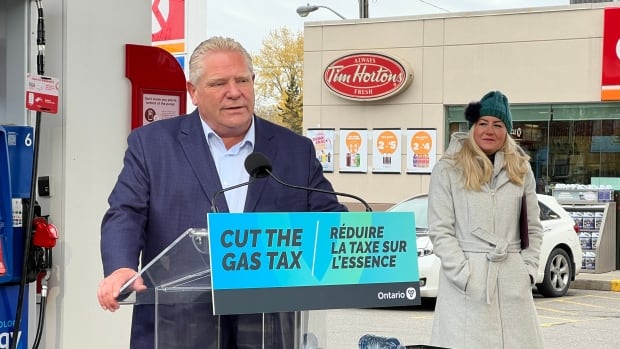 A temporary tax cut intended to help Ontario residents save money at the pumps will be extended for another year, the province’s premier announced on Sunday.

Doug Ford said his government intends to table legislation that would leave the tax break that cut gas prices by 5.7 cents a litre in place until the end of 2023. The cut first went into effect on July 1 and was originally due to expire on Dec. 31.

“We know that every dollar helps,” said Ford, speaking at a gas station in Toronto’s west end. “And this gas tax cut is another way we’re delivering savings to Ontario households.”

Ford cited inflation and global economic uncertainty as reasons behind the extension, which will also maintain a 5.3-cents-per-litre reduction in the price of diesel fuel.

Ford estimated the tax breaks would save households an average of $195 over the entire 18-month course of the price reduction.

The province’s rate of tax on gas and diesel will remain at 9 cents per litre until the end of 2023.

“Ontarians are getting crushed by the skyrocketing cost of groceries, housing and utility bills, and they need more help,” interim Leader Peter Tabuns said in a statement.

“Instead of helping folks afford basics like food and heating, Doug Ford is doubling down on a gas tax scheme that doesn’t even guarantee drivers will see so much as a penny in savings.”

The legislation enshrining the tax cut is due to be tabled on Monday alongside the province’s fall economic statement.

A report two weeks ago from the Financial Accountability Office projects budget surpluses for the foreseeable future.

Ford took issue with those numbers on Sunday.

Finance Minister Peter Bethlenfalvy announced in September that Ontario ended the last fiscal year with a $2.1-billion surplus, a far cry from the $33-billion deficit projected in the budget, thanks to inflation and a strong economy.