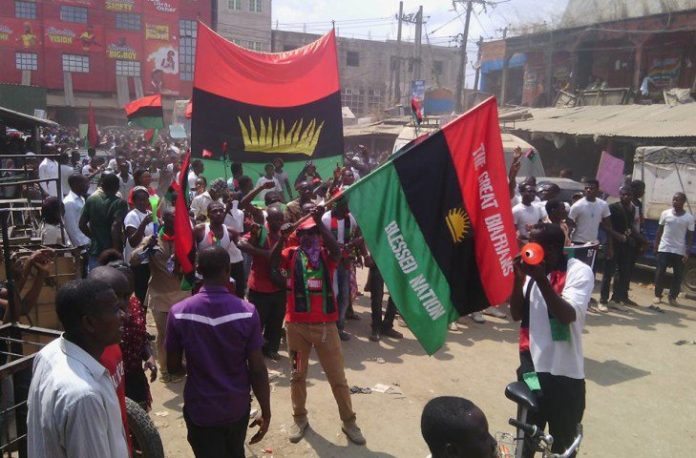 Members of the now outlawed secessionist group, IPOB, say going by the constitution, it is only the court that can declare them a terrorist organization and not the Defence Headquarters. The group said this in a statement released and signed by Emma Nmezu and Clifford Iroanya who claim to be spokespersons of the group.

The statement went further to add that the terrorism (prevention) Act of 2011 boldly states in “section 2 stipulated that only a judge can declare an organisation proscribed based on proven case of acts of terrorism and such case will be presented to the judge through an application made by the attorney-general or the national security adviser or the inspector general of police with the approval of the president. The judge’s declaration will thereafter be gazetted. The questions that now beg for answers are:

(1) Does the director of defence information (DDI) of the Nigerian army (Major-General John Enenche) fall into any of the three categories of persons that should make an application to a Judge to declare IPOB a terrorist organization?

“(2) Which judge did the DDI make such application to and was it approved by the president prior to submitting the application?

“(3) Where is the approval given to the DDI by the judge? (4) When and where was the Judge’s declaration gazetted?”

“In particular, this deceitful act is a violation and interference into the judicial arm of government and it is an overreach. It is also a deliberate act in contempt of a subsisting ruling in a competent court of law.

“IPOB, whether led by Nnamdi Kanu or led by the DOS, is not a terrorist organization because no court of competent jurisdiction has so declared it. The so-called declaration by Major-General John Enenche is null and void and of no effect.”