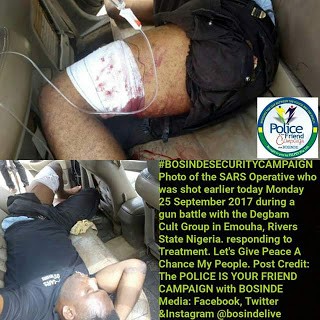 Members of the Degbam Cult group ambushed a patrol team of Police Special Anti-Robbery Squad, SARS, along the Emuoha section of the East West Road at about 9 am on Monday.

The ensuing gun battle resulted in the death of a member of the cult group while a policeman was seriously injured and is currently in the intensive care unit of the University of Port Harcourt Teaching Hospital.

The Commander of SARS in Rivers State, Akin Fakorode, who confirmed the incident said:

“We had encounter with cult group in Emohua this morning. We were on patrol to stop kidnappings and robberies in that axis and to make the East-West road safe for travellers, when we were attacked. A gun battle ensured leading to the death of one of the cult members

“No arrest has been made yet, we are still on the trail of other members of the cult group. We just recovered some of the weapons of the cult members.

An eyewitness, Aghedo Alexander, who shared the photos narrated the incident on Facebook.

“I witnessed everything on my way to Ahoada, my office. I was caught in crossfire or will I say ambush, after backup came from SARS and they cleared the blockage at OGBAKRI junction chasing this protesting cult boys into the bush, and telling motorist to continue their journey. Unknown to us and the SARS team that these cultists have mounted another ‘burn fire’ and road block 2 kilometers away from the first one SARS cleared, the boys came out from the bush and started shooting at motorists. Thank Goodness my driver was fast enough to make a U-turn. Thank God for safety” 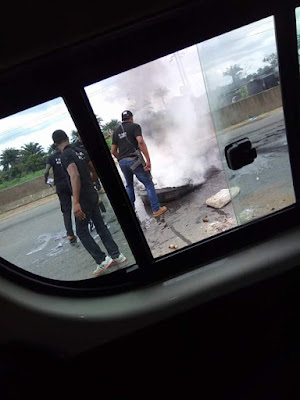 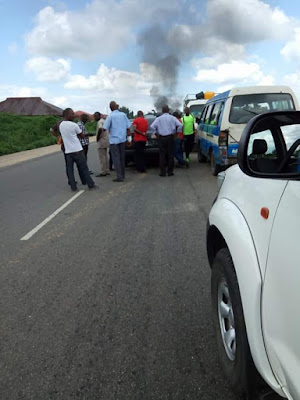 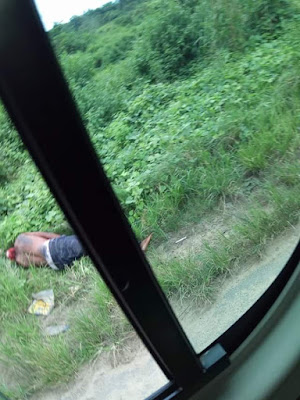 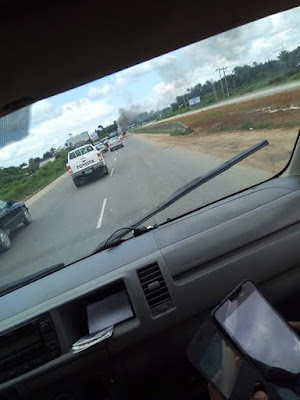 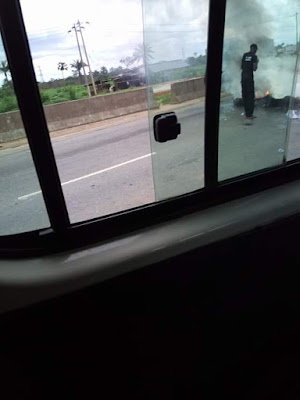 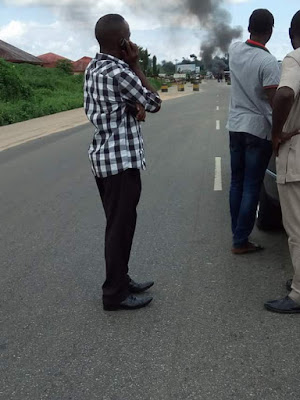 Share
Facebook
Twitter
WhatsApp
Pinterest
Linkedin
ReddIt
Email
Print
Tumblr
Telegram
Mix
VK
Digg
LINE
Viber
Naver
Previous articleJustice Opeyemi Oke sworn in as the Acting Chief Judge of Lagos State
Next articlePopular interactive sex doll, Samantha, who was the star attraction at an electronics fair which held in Austria this month, has finally broken down after a large number of customers got too much on the robot to handle. According to reports, Samantha the Sex Doll had been showing off her ‘skills’, which include reacting to touch, hugging and moaning – and remembering individuals she has ‘interacted’ with, at the Arts Electronica Festival in Linz. Unfortunately, the interactive sex doll is presently undergoing repairs after visitors left the robot ‘heavily soiled’ with broken limbs. Popular sex doll Samantha finally breaks down after a lot of customers heavily massaged the breasts (Photos) The developer Sergi Santos from Barcelona, Spain, described the way visitors approached the robot as ‘barbaric’. ‘The people mounted Samantha’s breasts, her legs, and arms. Two fingers were broken. She was heavily soiled. People can be bad. Because they did not understand the technology and did not have to pay for it, they treated the doll like barbarians.’ According to Mr. Santos, he said the robot had to be sent back in a parcel to Barcelona for repairs and cleaning, adding that ‘Samantha can endure a lot, she will pull through.’ Earlier this month, it was revealed that Samantha who was bought for £3,500 is more preferred by customers to real prostitutes. Popular sex doll Samantha finally breaks down after a lot of customers heavily massaged the breasts (Photos)