Ojibwe horses are endangered, but a few Canadian ranches are determined to keep them alive 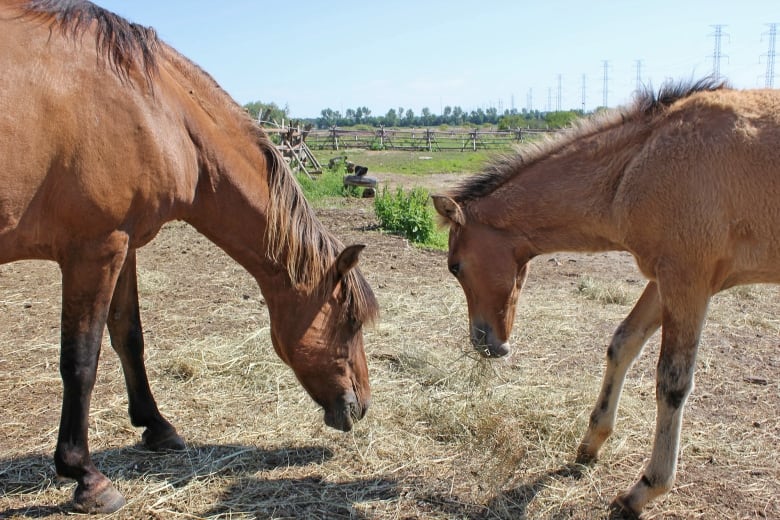 Darcy Whitecrow remembers when, about 50 years ago, small horses lived alongside his community of Seine River First Nation, in northwestern Ontario.

“We were living in a nice, isolated community where the horses roamed free like the deer,” Whitecrow said. “Whenever you needed a horse, they’d just go and get one because he was just eating outside, right outside the wigwam.”

He said the animals had a natural relationship with the people in his Anishinaabe community. “They just basically stood close to the communities, perhaps because they felt more safe.”

The horses were so important to his people that the main road close to the reserve is called Horse Collar Junction, he said.

But Whitecrow also remembers when these little horses disappeared. He was about five or six years old then — and no one in Seine River thought the horses would ever return.

Called the Lac La Croix Indian Pony or Ojibwe Horse, the small North American breed is said to have lived mainly in the boreal forests around the Great Lakes before European contact, though evidence suggests they may have lived across the continent.

DNA testing shows that they are a separate breed from the horses introduced to North America by Europeans, according to the Ojibwe Horse Society.

They were traditional helpers and assisted the Anishinaabe with checking trap lines, moving goods and transportation.

But European settlers weren’t so keen on these little horses. Most of the animals were culled because, as wild animals roaming free — they grazed on farmers’ fields and bred near settlements, upsetting missionaries — they were considered a “nuisance.”

Now, although their numbers remain low, Ojibwe horses have a chance of survival because of the help they’ve received from people who have dedicated their lives to saving the breed.

As a young girl living in Fort Frances, Ont., in the ’70s, Rhonda Snow would hear elders and loggers talk about these powerful little horses. Their stories intrigued and inspired her.

“The Anishinaabe learned from these little ponies … they were their teachers,” she said. “They were selectively bred from nature. The strong survived and somehow the Creator understood this. Without any human influence, they were the strongest little ponies.”

But Snow didn’t see a single Ojibwe horse until she was an adult.

According to the Ojibwe Horse Society, a volunteer organization that promotes and protects the endangered breed, by 1977 only four mares remained in the Lac La Croix First Nation area, in northwestern Ontario near the U.S. border to Minnesota.

To save them from slaughter, a group of men from the United States and Canada took the mares to Minnesota, where they were bred with a Spanish Mustang.

Around 2004, when Snow heard there were a few of these horses still living in Minnesota, she gathered up what funds she could find and brought three horses back to Fort Frances.

Since then, she’s dedicated her life to finding what remains of these animals and bringing them back to the areas where they used to live. She travelled to First Nations communities in Canada and the U.S., spoke with elders and combed through archives to piece the animal’s story together.

As part of this research, Snow discovered an Indian Affairs report that called the animals “worthless little ponies.”

“They were a nuisance. They were worthless. It’s all documented,” Snow said. “So the pressure was [on] to get rid of them, and a lot of the old chiefs fought it for a long time.”

The breed is still endangered; there are fewer than 200 Ojibwe horses alive today. But since Snow fetched them from the United States, the population has slowly grown and the breed can now be found at ranches in Ontario and the Prairies.

The Ojibwe horse’s return to Seine River, Ont., was thanks to Whitecrow, his partner, Kim Campbell — and some luck.

The two were looking for a way to help curb the high school dropout rate in the area.

“I was a horse person. I always have been. And I had a couple of horses,” Campbell said. Watching Whitecrow’s kids — her stepchildren — get involved with the horses inspired the couple to start an after-school equine program for youth.

At first, they travelled from ranch to ranch to run the program. Later, they decided to open their own, called Grey Raven Ranch, and hold the program there using Campbell’s horses. 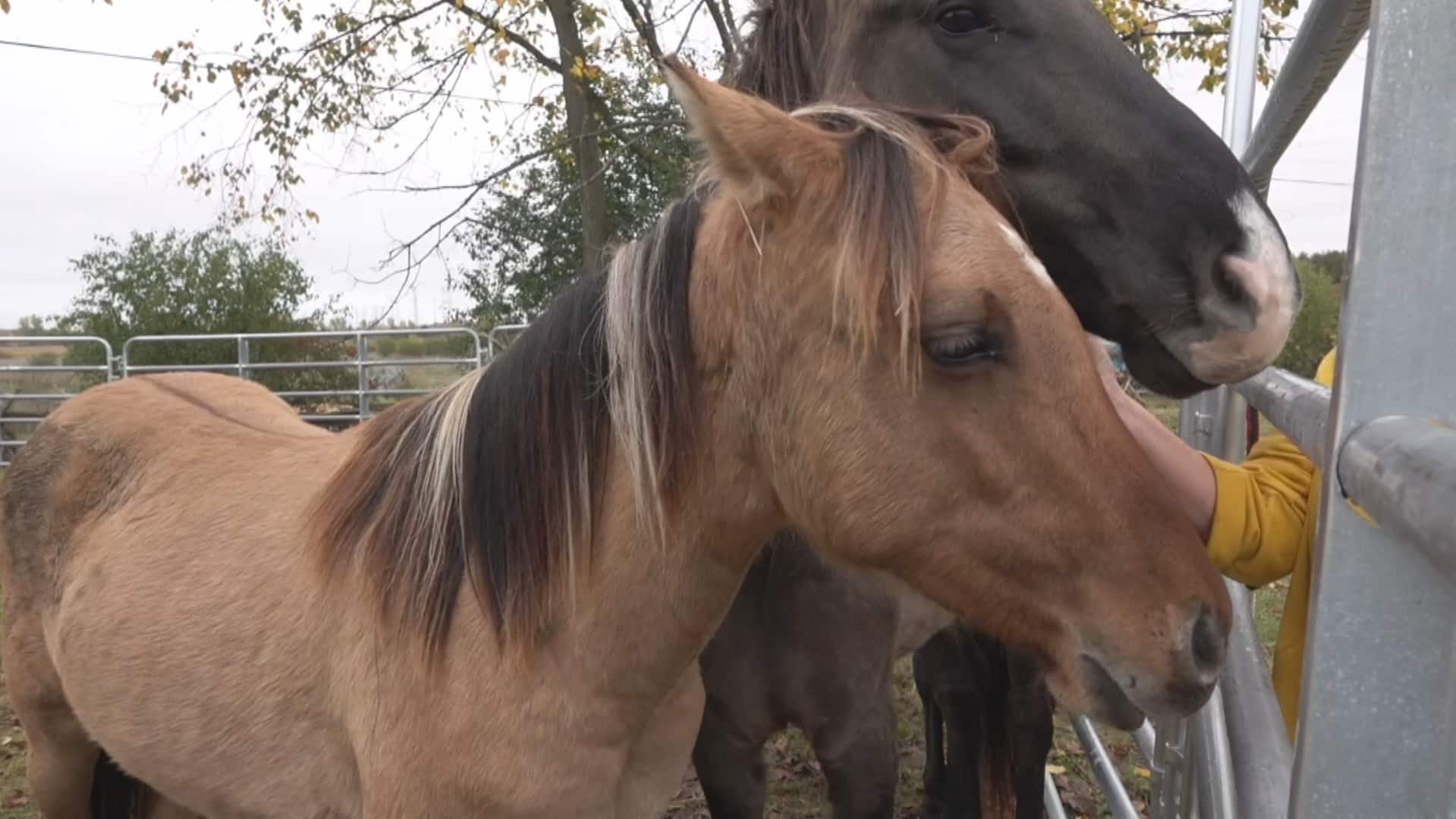 Trina Mather-Simard, director of the event company Indigenous Experiences, says the rare breed of horses used to run wild across the region and now represents an opportunity to share Indigenous culture.

Campbell, who is from northern Michigan, had never never heard of the Ojibwe horse, and Whitecrow thought they had all disappeared. But, unexpectedly, they came across a farm that had a small population of the rare breed.

When the owner fell on hard times, the couple was able to purchase the horses and — after a five-decade absence — finally bring them back to Seine River.

“Elders were crying and very tearful on the day that we brought the horses back into the powwow grounds, and we told them that they’re always going to be here,” Whitecrow said. “It was a very special moment.”

“I let the horse be the teacher … He mirrors everything that you’re feeling. Your nervousness, your fear, your happiness, your joy, your excitement,” Whitecrow said.

We’re creating a legacy of a horse that is a critically endangered species … a horse that’s of our ancestors. And it’s so important that we keep the breed going.– Darcy Whitecrow

While youth might be afraid at first, Whitecrow assures them that the horses are like big dogs. They’re strong animals, but they’re also affectionate and loyal.

“The horse actually helps you open up the things that you normally don’t trust or open up to, say, in a high school setting,” Whitecrow added.

These days, their goal has shifted more to breeding to help the Ojibwe horse survive.

“What we’re actually doing here is we’re creating a legacy of a horse that is a critically endangered species. The horse that would become no more; a horse that’s of our ancestors. And it’s so important that we keep the breed going,” Whitecrow said.

“I keep telling the youth … to them we’re just shoveling horse poop, riding horses, playing with horses,” he said. “But in actual reality … long after we’re all gone, those horses will still be here because of the efforts that you put in.”

At home in a big city

“We were really inspired by their story,” said executive director Trina Mather-Simard. “And so we brought some horses back to Ottawa and started looking for a farm opportunity.”

Mather-Simard, who is a member of Curve Lake First Nation near Peterborough, Ont., and whose daughters are equestrians, has since learned that these horses lived alongside her own ancestors.

The farm is creating forest trails to recreate the horse’s natural environment and piloting an equine assisted learning program this fall, with the aim of opening the program up to the broader community in 2023.

But the ultimate goal of having the Ojibwe horses at Madahoki Farm is to spread the word about them and how important they were — and are — to Anishinaabe people.

“I just think that they share such a strong story of resilience,” Mather-Simard said. “It’s so important for me to see this breed continue and for as many Canadians and visitors as possible to know about them … and the fact that they’re still here when we almost lost them.”