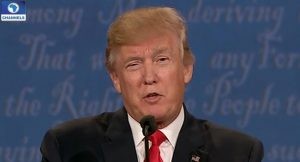 Global benchmark Brent Crude futures were down 23 cents, at $50.4 a barrel. While U.S. West Texas Intermediate crude futures dropped 26 cents to $48.1 per barrel.

Commodity markets were absorbing news the United States would withdraw from the landmark 2015 global agreement to fight climate change, a move that fulfilled a major campaign pledge but drew condemnation from U.S. allies.

Surging U.S. production has put a strain on OPEC members’ efforts to curb production to drain a global crude supply overhang and to prop up prices. Trump had on Thursday announced that the United States will withdraw from the Paris Climate Deal, a move expected to rally his support base at home while deepening a rift with U.S. allies.

Trump had refused to endorse the landmark climate change accord at a summit of the G7 group of wealthy nations on Saturday, saying he needed more time to decide. He then tweeted that he would make an announcement this week.

The decision puts the United States in league with Syria and Nicaragua as the world’s only non-participants in the Paris Climate Agreement.

It could have sweeping implications for the climate deal, which relies heavily on the commitment of big polluter nations to reduce emissions of gases scientists blame for sea level rise, droughts and more frequent violent storms.

The accord, agreed on by nearly 200 countries in Paris in 2015, aims to limit planetary warming in part by slashing carbon dioxide and other emissions from the burning of fossil fuels. Under the pact, the United States committed to reducing its emissions by 26 to 28 percent from 2005 levels by 2025.

The United States is the world’s second-biggest carbon dioxide emitter behind China.

Supporters of the climate pact are concerned that a U.S. exit could lead other nations to weaken their commitments or also withdraw, softening an accord that scientists have said is critical to avoiding the worst impacts of climate change.

Canada, the European Union, and China have said they will honour their commitments to the pact even if the United States withdraws. A source told Reuters that India had also indicated it would stick by the deal.